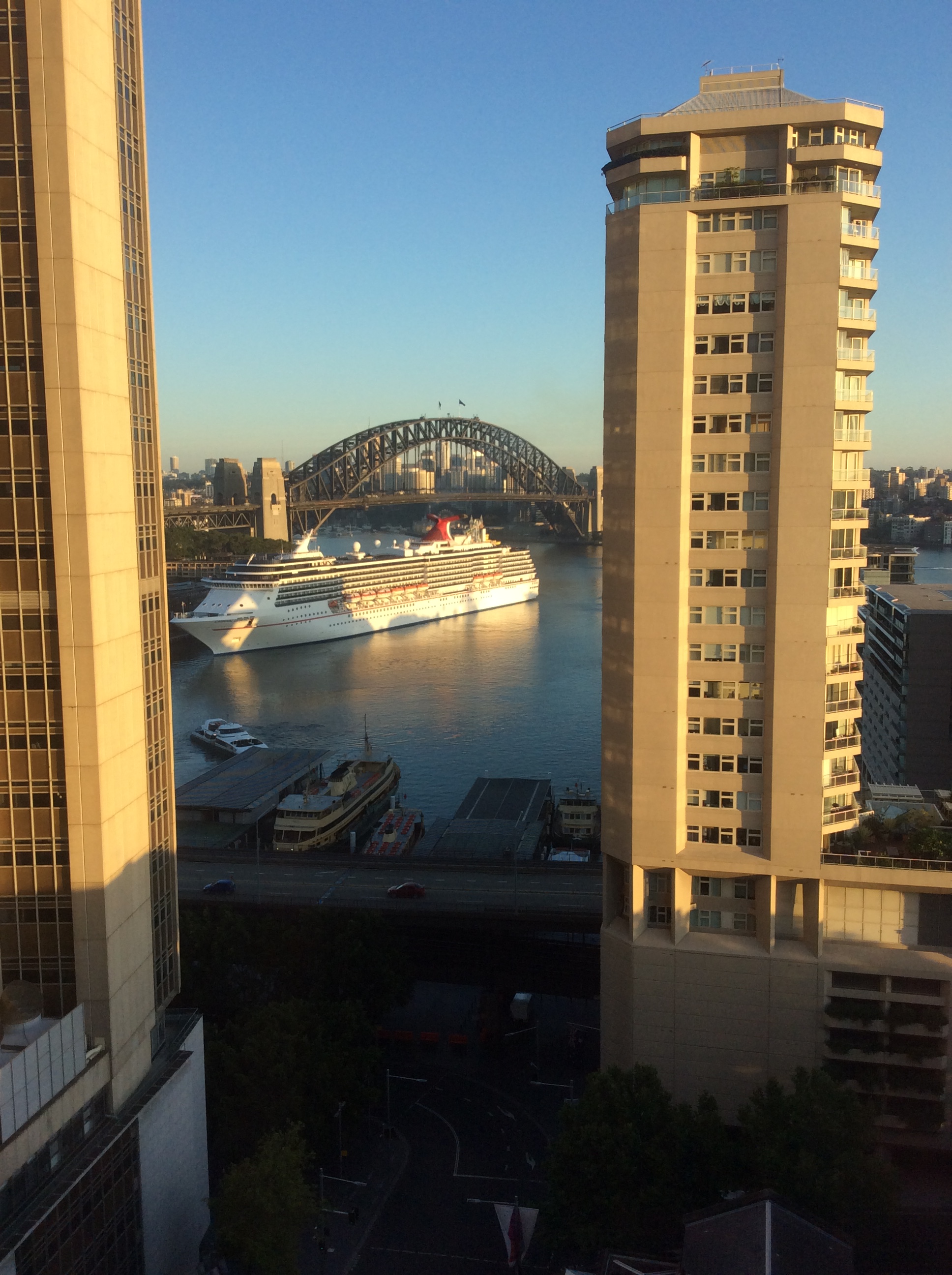 Sydney is a very nice city especially where I’m staying in circular quay near to The Rocks. My room has a great view of the cruise terminal and the harbour bridge and I’m staying at the InterContinental (think of the points).

Sydney is Australia’s largest city but only by a few hundred thousand more than Melbourne. It seems a lot bigger though. People from here are called Sydneysiders as opposed to Melbournians or those from Woggawogga. Forgotten what they’re called.

One of the more curious things about the Australian weather is the massive temperature swings depending on the prevailing wind. From the Pacific and it gets warm; this week up to 37 degrees. From the south and the temperatures can plummet to 20 degrees like today.

Sunday
My friend Jim (69) from the cruise ship had invited me to his daughters in a suburb of Sydney called Woronora. Of course he hadn’t told her. Anyway it was about a 40 minute drive to this charming and fairly affluent place called Liffey Place right by the river. Number 24. Well, that’s what he told me. Anyway I rang on the door several times with no luck and waited outside for about half an hour eventually seeing a woman pruning her bush outside her house so I asked if I could call Jim from her phone. My phone was malfunctioning. It turns out it was number 28. I found Jim and met his daughter and her husband Paul. I also told them that the people at number 24 weren’t in (in case they were interested in neighbour whereabouts). They were pleased with the information. Spent a nice couple of hours there.

I’d planned to go to Bondi beach but the weather looked iffy so I did a city tour. Opera House (closed, so I did my usual), observatory, Garrison church, the QVB, the botanical gardens. A really lovely day and of course the sun had come out at about 10 so I could have done the beach after all.

Jim and I headed off to the Blue Mountains which are about 2 hours west of Sydney. Jim told me his story. American GI father from the war whom he never knew and his mother gave him up for adoption almost immediately. Jim was in an orphanage in Birmingham and in 1952 at the age of 6 he and 30 other boys from the orphanage were shipped to Australia. He was adopted by a middle class family who already had a son six months younger than Jim and he had a happy childhood from then on. Now Jim looks like Charlton Heston but as a kid with a mother from Northern Ireland he had very fair skin and red hair. A great combo for the Australian sun.

The Blue Mountains were great.

In the evening I met with Michael, Dee and John Banks and his girlfriend Tracy and we had a drink and dinner. All very pleasant.

Today I took a ferry to Manly beach which many locals prefer to Bondi and I have to say Manly is quite splendid. There were 8 beach volleyball courts in a row with a tournament going on which was good to watch and the local schools were holding their respective sports days… on the beach. They break up soon for their 6 weeks summer holidays. I particularly liked the “crawling over the sand on your belly then run into the water around two teachers” race. There were also surfing lessons going on which is odd because I thought surfing was a natural genetic abnormality unique to Australians – no practise required. Perhaps they were tourists.

The good news is that the toilet in my room has been fixed. I was using a hotel toilet this morning having a Mr. Bridger moment when seconds later a chap turned up. It was eerily quiet so my British sensibilities thought I’d wait for him to leave. I was quiet as a mouse. Once you start that kind of thing you have to keep it going, after all I thought he’d been gone in a minute or so. Oh no. 15 minutes later he’s still in there not necessarily using the toilet in trap 3 but the strangest goings on one could imagine. At one point it sounded like he was scrunching up the loudest “paper” I’ve ever heard. Bundles of it. Then the zipper on his laptop bag started. The lighting was also a factor similar to when you’re making animal shapes on a wall so I could see all these shadows moving about. I started to get the giggles and that can be fatal for church mouse like behaviour. He eventually left and as soon as he did I heard the faint voice of the female cleaner saying “hello”. I called back a soft plaintive “hello” (cover blown) hoping she’d bog off (pun intended). Too much information??

Anyway three more days in Sydney then off up the coast. Next report, Sydney Part Deux – the wedding.

One of the great things about Sydney is the diversity. City, beach, water and of course bush. Wherever you go in Australia you’re never far from bush (as they call it). It was a guy in a menswear shop in Ulladulla that first said it. “Ulladulla has everything” he said. “Sun, surf, beaches and plenty of bush”. We had a great chat about politics – socialism versus capitalism: Jim, at one point I though he was your long lost twin. It was like chatting with you. I only went in for a pair of shorts. I came out with a different philosophy on life.

I woke up at 7:30, pressed the button for the electric blinds (get me eh) and another cruise ship was in the dock. Radiance of the Seas this time. I had no real plan so popped my head outside and it was cloudy and the forecast didn’t show an improvement. However in Canberra it showed 28 and sunny so I decided to go there for the day. Only 3.5 hours away. I’d like to say say it was for cultural reasons – museums, architecture, galleries, monuments etc. but it really was chasing the sun although as I spent 7 hours driving I didn’t get to enjoy it much. Still, one has to do something with ones time!

Canberra is absolutely fantastic. Much better than my low expectations (secret of a happy life). Clean, well laid out, pretty, plenty of space, no high rise buildings. A real revelation. It reminded me a bit of the Truman Show though. The population in Australia’s capital is quite small at 350,000 so about the same size as Bromley. The comparisons end there. It was worth the effort and I took some great photos. Well, I took some photos. Mario Testino might not consider them classics but they’re good enough for me.

Another day, another new cruise ship parked outside. Sunnier today so it was off to do the Coogee to Bondi walk via the bus. The walk took about two hours along the coast and probably the best coastal walk I’ve ever done (I’ve done about 3). It seemed everyone who passed me doing some kind of exercise had the perfect body. I don’t think I’ve ever felt so self-conscious of my paunch and muffin tops (was that tautologous? Bob?). When I get back to the UK I’m going to have to get in shape and give something up. I was thinking of “round” and broccoli.

There were a few beaches on the way and I stopped at Tamarama for an hour before pushing on to Bondi (I make it sound hard work – it wasn’t). The final section of the path took me past “Icebergs” which is a famous outdoor 50m pool right next to the sea. In fact the chap in lane 1 was getting waves coming over the side wall. With felicities like that no wonder they’re so good at swimming. Quite incredible. Bondi was busy but I still managed to spent an hour there people watching. It was hell!

Early evening Michael invited me to the Opera Bar next to the Opera House.  Come down Pat. We’re watching the sunset. Well it was rammed with all the beautiful people of Sydney and it took about half an hour to find him. I met some of Michael’s friends and then 7 of us went for a curry. We planned to play golf the next day. 6am start!

Up at 5 only to get a text saying golf was off. So I was at a loss what to do. Went back to bed.

When I finally took the suit out of the garment bag I was astonished to see how utterly crumpled and generally unwearable it was. I suppose it had been stuffed into a small rucksack and FedExed from Singapore so what on earth was I expecting. Anyway I couldn’t wear it so I ended up being the scruffiest person at the wedding but it didn’t matter because it’s Australia.

The venue was a 20 minute ferry ride away at Dunbar House, Watsons Bay and it was a beautiful sunny afternoon so I sat on the upper deck, hair billowing in the wind.

The ceremony was just perfect and they looked very happy together. They have some lovely friends and the whole evening had a really nice atmosphere. I was expecting Barry White’s “Love Theme” to start at any time.

I’m sure Michael will forgive me for saying but the highlight of the evening was the midnight water taxi back to the quay seeing the opera house and harbour bridge lit up. One of those moments I will treasure, standing on deck with a cool breeze (hair still billowing) looking at the best Sydney has to offer just capped off the perfect evening.

Despite a late alcohol filled evening I managed to rouse myself at 7 and headed 385km north to Port MacQuarie. An idyllic spot and I stayed at a motel…

Final snippet, after passing the driving test learner drivers (from 16) progress from L plates to a red P plates for a year which has certain restrictions. After 12 months they progress to green P plates and after a year of that they are full licence holders. In total they take 3 or 4 tests along the way (practical and theory). Everyone I speak to avoids P platers!