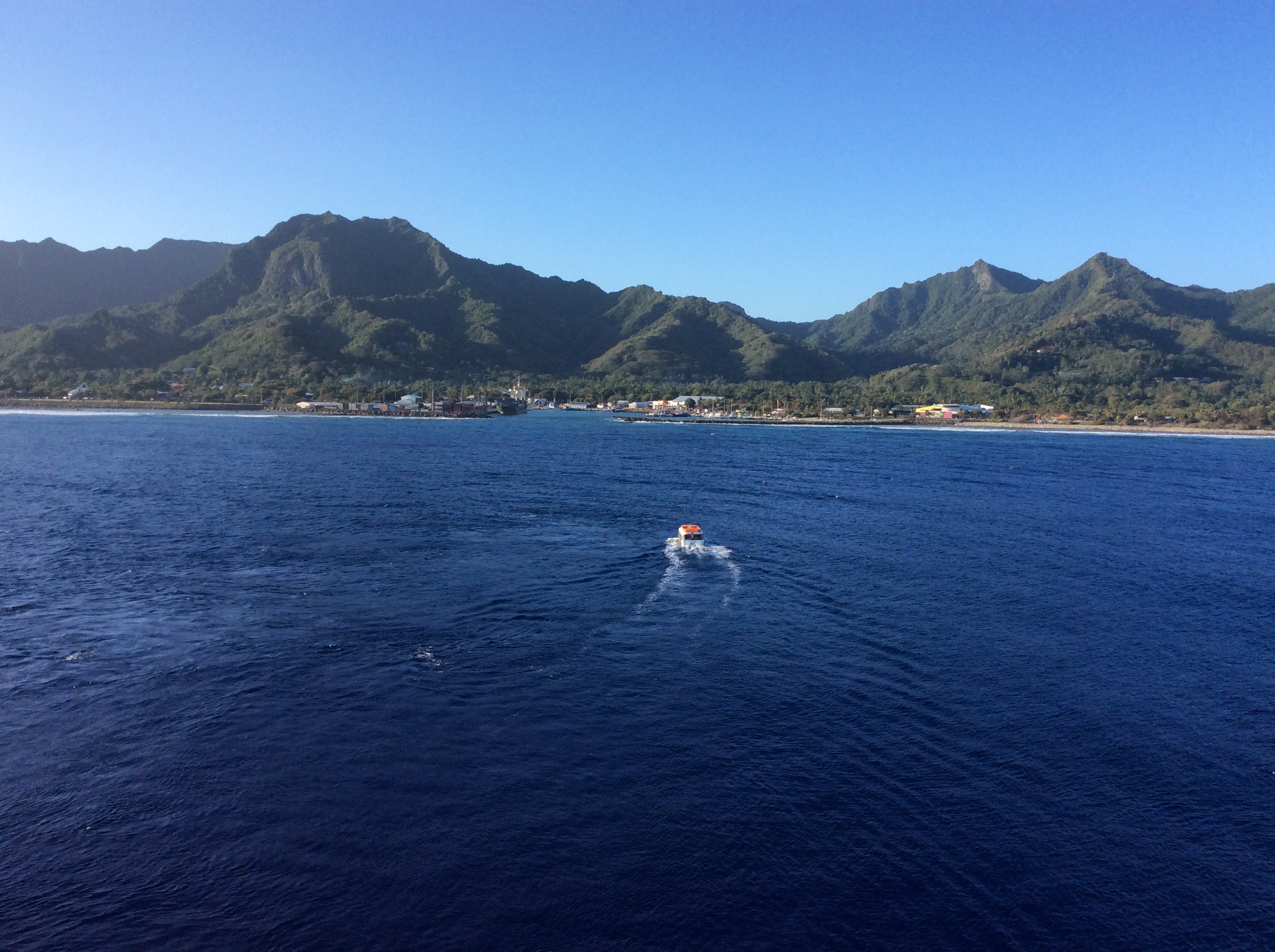 Dear all or Kia orana as they say in Rarotonga,

Drama this morning as we stopped in Rarotonga in the Cook Islands. It is notorious as a “missed port” due to the sea swells and this morning was no exception. The captain had warned us the day before that we may not be able to tender people ashore. We stopped off the coast of Avarua and the tenders were put into the water but they couldn’t stabilise the platform so we cruised round to the west side of the island with the 4 tenders following. The west side was marginally better but the tendering process took three times as long as normal as the swell caused chaos with the tender vs. platform. Those with mobility issues were told that they could not go ashore. You think that would deter the vast majority of passengers but no. We finally got on a tender at midday. The ship wasn’t anchored because the water was too deep so they use a GPS joystick thingy with the thrusters keeping us stable. Only 400m off shore and the water was 9800ft (two miles) deep!

One of the more amusing aspects of this change of jetty is that the usual welcoming party and tour buses and taxis and stalls selling all sorts of tut had to pack up and scoot over to the west side of the island.

The local buses take US dollars on cruise ship days and give a shoddy exchange rate. There’s a clockwise bus and yes you guessed it, an anti clockwise bus that take about one hour to go round the island. I felt sorry for the locals as a long line of hapless tourists boarded the bus at the jetty taking an age to work out what kind of ticket they wanted. It goes without saying that I was the most hapless of them all.

Rarotonga is stunning and it has a much better vibe about it than any of the four French Polynesian stops we made. It was more developed and of course they speak English instead of French. We circled the island on the bus and the driver gave us a comedy show with singing. A very amusing chap indeed and someone who clearly loved his job. We went clockwise (in case you’re interested) and returned to the jetty for even more drama.

One of the four tenders had run aground. There’s a reef all around Rarotonga with some small inlets scattered here and there. The channel in and out was narrow and the tender had got caught in the wind. 120 guests were on their way back to the ship, some of whom could walk back to the beach along the coral but many of whom who couldn’t and were stuck for up to 2.5 hours whilst a rib rescued them in small groups. The captain dressed in his uniform from the waist up but in board shorts below had been in the water as part of the rescue effort (British captain called Jonathan Mercer or captain Jonathan as he calls himself). The Italian first officer was seen fleeing the scene in a row boat at the first sign of trouble. There was much excitement as onlookers saw the whole scene unfold. At 3:30 the tender finally broke free and there were loud cheers from the jetty. A tug boat had been deployed and two tow ropes had snapped in the process.

Whilst it was all going on I had a swim in the sea. Very shallow for about 40ft and where it shelved off severely and I inadvertently strayed into a current which was extremely strong. I had to use my flip flops as hand paddles to get back in. An anxious moment…

Rarotonga is the most populated on the 15 Cook Islands and also home to the capital Avarua. The population of all the islands is 15,000 and they only cover a total of 93sq miles. They belong to New Zealand and use the NZ dollar. The longest Maori word at 85 letters is…

Only kidding – it means the summit of the hill where Tamatea who is known as the land eater slid down climbed up and swallowed mountains played on his nose flute to his loved one. Catchy.

The entertainment that evening was Bobby Brooks Wilson son of the Motown singer Jackie Wilson. Had a nice chat with him.

Christchurch is the largest city in the South Island with a rather minuscule 380,000 people.…