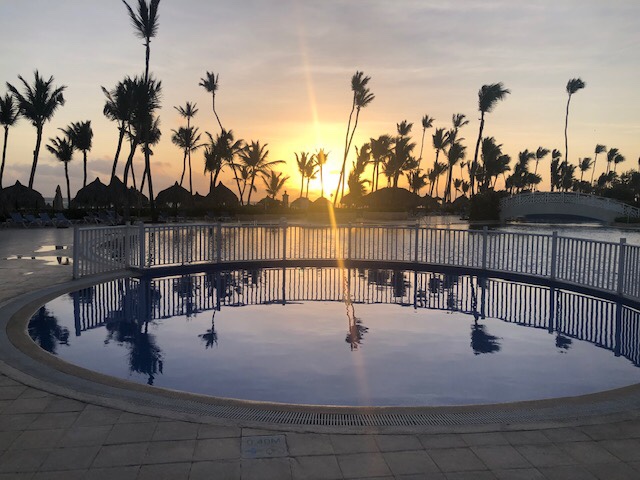 Well they’re taking no chances with Covid in the Dominican Republic. Because of a reduced number of tables in the restaurant, we’re having to “book” a slot for the buffet. I mean has anyone ever heard of such a thing. A buffet reservation? It’s barbaric. As for the gym and the chap who runs it, Dominik with a K, the floor area has been zoned off with yellow tape with each area containing about three machines. And yes, you have to book the area you want. I had quads and thighs today. Tomorrow I’m working shoulders and pectorals. There’s no wandering around from machine to machine as the mood takes you, oh no. I made sure I didn’t stray from my assigned apparatus although I did step on the yellow tape a few times just to see what would happen. Nothing. So all of a sudden I’ve got a schedule and I don’t like it. I’m onuz hollidees. Who knows how Jane McDonald spells it.

I’m convinced Dominik from the gym is OCD. Up until now my sympathy has been almost exclusively reserved for lip readers during these challenging times and have spared little thought about how the pandemic might be affecting those with the washing tendencies associated with OCD. As people arrive, and there aren’t many I can tell you, due to “exercise fascism”, he scurries to their assigned machines and frantically wipes them down. Upon entering the gym one has to wipe their shoes on not one, but two mats both with a specific foot action.

There are lots of foreigners here which is no great surprise considering it’s an international tourist spot, but I mean real foreigners. Like the type you don’t normally come across. I got roped into taking a photo the other day of two rotund girls from Haiti. They certainly didn’t look like they came from the poorest country in the Western Hemisphere and there’s no way there’s a food shortage where they live. There are also lots of Latinos. The vast majority of flights landing at PUJ on a daily basis are from the US but I’ve not come across that many Americanos.

I woke at 3am following a nightmare that I’d forgotten my scheduled appointment in the gift shop. At six I went strolling and realised just how big the resort is. They seem to favour their sprawling resorts in DR. At lunchtime I walked a couple of miles down the beach in search of the Hard Rock resort to check out the casino (recon mission only). The hotel at beachside was ghastly with lots of work going on in the grounds. So much so that I couldn’t believe they were still receiving guests. I’m glad I chose the Bahia Principe despite having no casino. And the Hard Rock was twice the price. I’d have been so disappointed had I booked it. Possibly even written a sternly worded letter to the ministry of tourism.

Having said that, the casino was one of the best I’ve seem outside of Vegas. Predominantly machines with one section of tables. I may pop down there one evening but I won’t be taking the beach route. A good day with spectacular weather.

The hotel staff are mostly friendly but you wonder if under the veneer of pleasantry, they want to kill us all. I sense a resentment in a few of them but it could just be Hispanic hospitality. Voodoo land is only next door.

A different section of the gym today and I’ve got to say I’m not in love with the sitting rower. I’m about as keen on that as I am of “cake of the day”. At the buffet you simply point at things you want on your plate. Then you’re at the mercy of just how many scoops of beans you’ll get. You’re standing a good distance from the food so what might look like butternut squash could well turn out to be mashed plantain. The descriptions are in very small writing.

The beach vendors only work one day every 15 so two days a month because there are so many of them and so few tourists. On that basis I decided not to haggle too much for a couple of items that I desperately needed. Beach hawkers actually have the best linguistic skills of all the groups I’ve met. Taxi drivers are the worst.

The Bahia Principe actually has about five different resorts on this massive complex but the others are all closed and they’ve funnelled what business there is, into the Luxury Ambar Adults Only. That last bit has been compromised somewhat because of the closures elsewhere so there are a few little blighters roaming around.

It’s Thursday, one week before America decides, and I’ve changed rooms to accommodate Dianna. I’ve traded two beds designed for Hobbits on a second floor balcony room to a “ground floor, king size bed, plunge pool on the terrace bathtub that they forgot to put in the bathroom” room for which the upgrade cost was one of the most reasonable I’ve encountered. I am however still bemused why they put crisps (potato chips) in the refrigerator. Call me an old fusspot but I like my lays at room temperature.

The official language in the Dominican Republic is Spanish and you get lots of the usual Spanish names like Miguel, Eduardo and Bert. But then there are some names I’ve not encountered before. Garibaldy with a Y was my food pointing accomplice this morning and Altagracia, which is apparently a fairly common name, took my plate away. Nairobi is my reception contact and she knows other Nairobis albeit spelt differently. And who can forget Nono the camp waiter who is particularly friendly to me. Dianna’s appearance should see to that because it’s a definite no no to Nono.