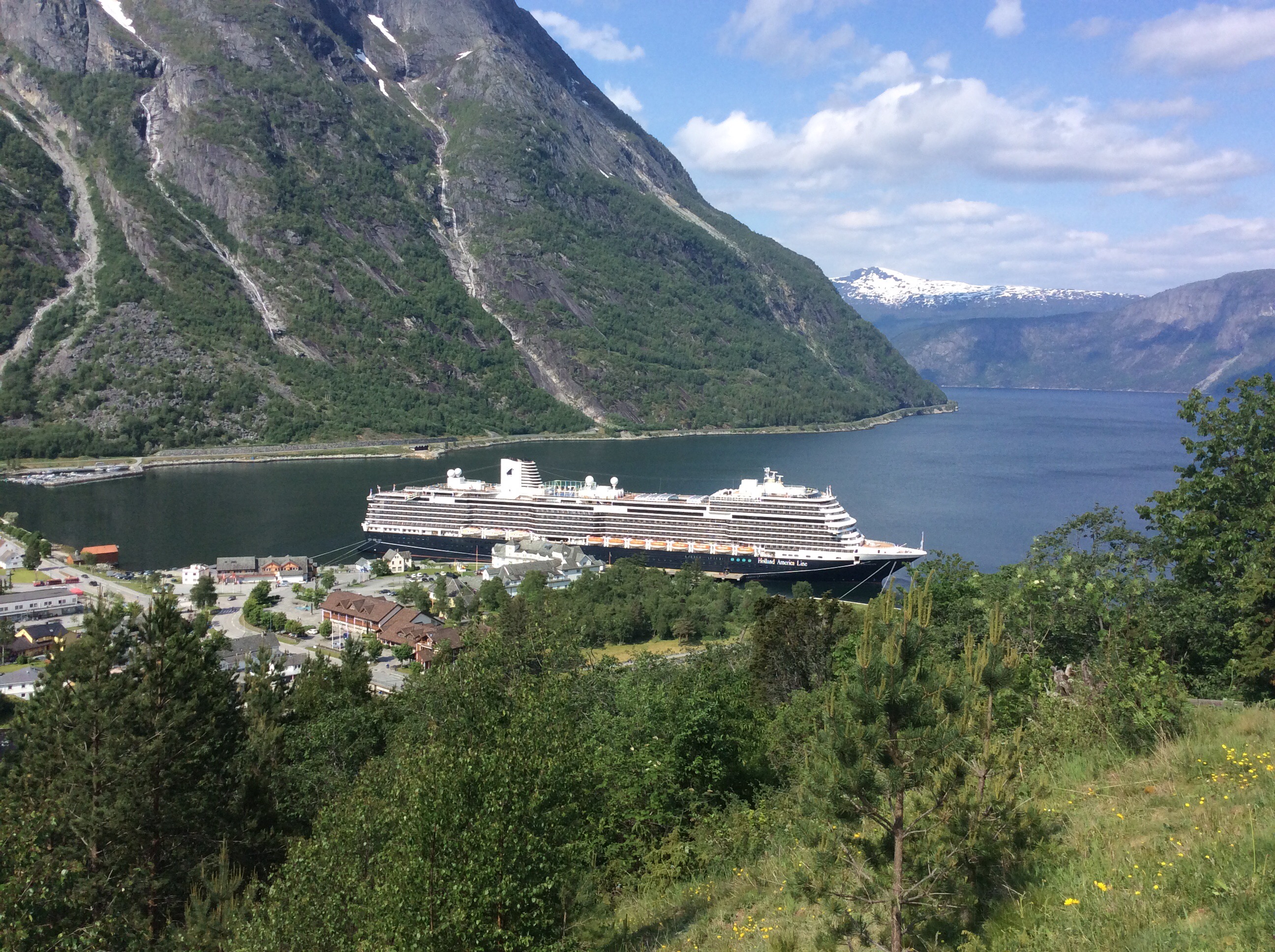 On Monday morning we arrived in a small village called Eidfjord in the Hardanger district. Eidfjord has a population of 950 and ranks 406th in Norway. It’s a very picturesque place and despite there being some temptingly expensive tours on offer, I decided to go freestyle. There was a 5 mile walk along a river and I met so many people, primarily because I did it in the wrong direction. I’ll do that again. Great if you’re in a sociable mood. The weather turned out to be fabulous and I was the only person in shorts. Some shipmates had dressed for an arctic expedition.

We left at 6pm and the journey back down the fjord was breathtaking. They had assigned the singles to a table by the window and as the sun didn’t set until 10:43 we had a terrific view of the dramatic scenery. Our group is bonding quite well.

In the casino I received my $1,250 credit for services to previous cruising in the form of cash! I shall endeavour not to lose it…

On Tuesday morning I awoke after a wondrous sleep (during which Katy and I were discussing carpets) in Bergen which roughly translates to “bring a cagoule” in English.

Bergen is Norway’s second largest city with around 260,000 people and has a temperate climate compared to Oslo because of the Gulf Stream. However it does rain. On average 235 days of the year compared with say Washington D.C. with 114. In 2006 it rained for 84 straight days which was a new record. 81 inches per year to London’s 29. The wettest city in Europe.

I hopped on the sightseeing bus and regretted it almost immediately. Every stop took an age for the old and infirm to get on and off. There was a noticeable absence of “hopping”! More like shuffling.

According to trip advisor the top attraction in Bergen is the funicular railway that runs to Mount Floyen providing wonderful views of the city. However on days like Tuesday where the clouds were lower than the peak its attractiveness diminishes. I got some great pictures of clouds though.

Lower down the trip advisor list are favourites such as the the Norwegian Knitting Industry Museum (loved it) and Pepperkakebyen, the World’s largest Gingerbread City (shut).

The Chat-stat: religious freedom is offered to every Norwegian except the king who is required to be an Evangelical Lutheran.

Dinner with my new chums again as we steamed towards Geiranger which is the number one place I want to visit in Norway.