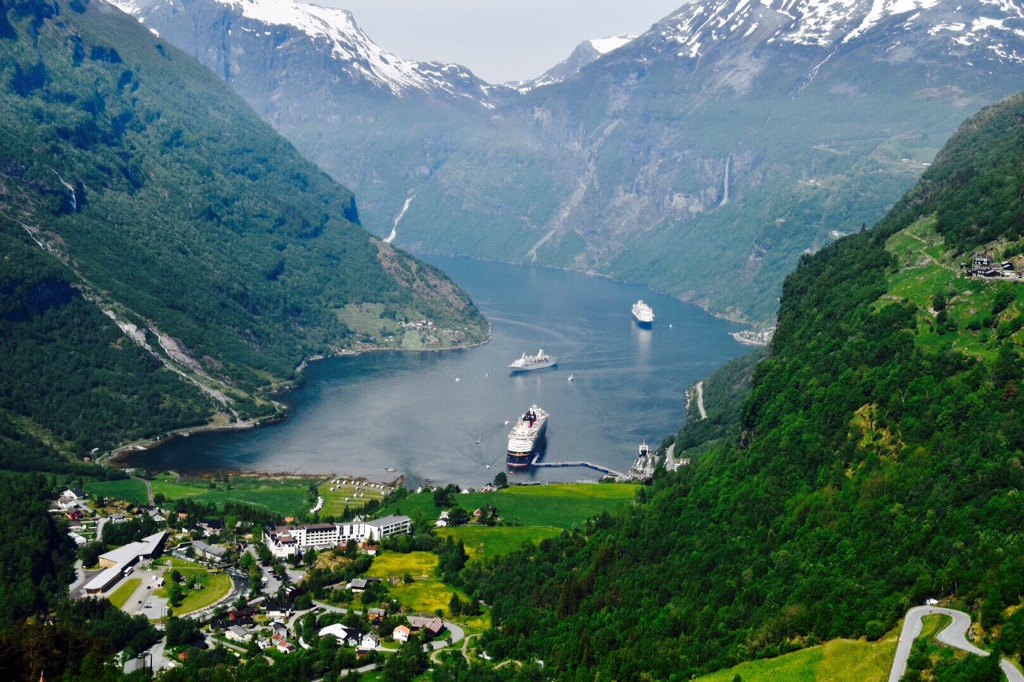 Whilst I was still sleeping the captain sailed stealthily into Geiranger fjord which is the one featured on most of the fjord holiday adverts. It’s supposed to be he most picturesque and by golly it’s quite something.

Five of the singles crowd were due to meet up and go scumping however Barrister Nigel from Tunbridge Wells cried off which left me and the three Australian ladies. We decided to walk up as far as we could along roads and through meadows. About a third of the way Simone and Julie developed altitude sickness and returned to lower ground. This left me and Dimitra to press on ahead. Dimitra was born in Greece and moved to Australia at the age of 17. She is the youngest of 17 children, 4 boys and 13 girls. She has been fairly successful in real estate.

The walk up was absolutely superb and the various levels gave so many different perspectives of the scene below. I’m happy to bore anyone whose interested in seeing the hundreds of images I took. On the journey down we took a different route and passed by some truly amazing waterfalls.

There seemed to be an unlimited supply of water cascading down the rocks at ferocious speed but the guide onboard said that he had never seen them so active. In a few weeks the waterfalls will run dry as the last of the snow melts.

Geiranger is the third busiest cruise ship port in Norway handling some 300,000 tourists in its short four month season and with a population of only 250.

Sometimes nature simply takes your breath away (as does walking up a mountain). This as a day I will remember for a long time.

Trondheim is a candidate for the most unattractive town in Scandinavia. After the breathtaking beauty of Geiranger, we came down with a thud. In fairness there were some parts of Norway’s third largest city that one could describe as “pretty” but for the most part it’s ugly.

The five of us did a self guided walking tour and Nigel was the man with the map. The cathedral was the top attraction however there was an entrance fee of 15 quid so we passed. A couple of hours mooching about and we were back on the ship.

The highlight of the evening was an organised pub crawl around the various bars drinking cocktails. Simone threw up. Simone is in her late forties, never married, adopted at birth then rejected by her adoptive parents so adopted by another couple. She had a gambling addiction for 13 years whereby she would get paid on a Friday and spend her entire wages on slot machines or pokies as they call them in Australia. She’s been clean/dry (not sure what term is used for gambling) for 18 months now.