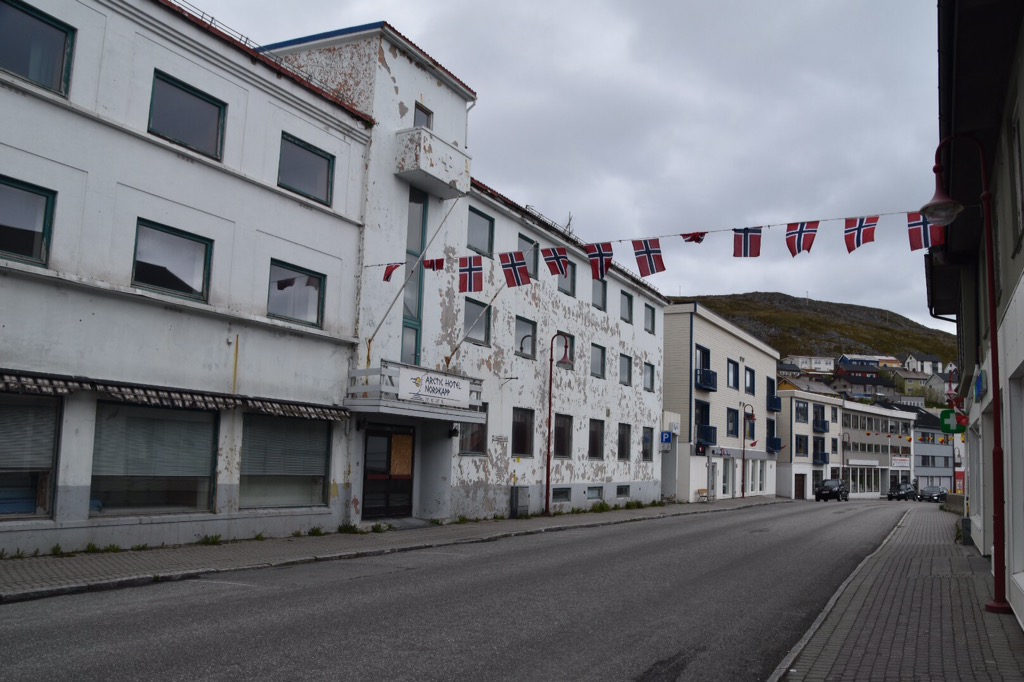 Saturday was a sea day, heading north and at five something in the morning we crossed the arctic circle. I think they thought we might get up early for it. No chance.

I went to the 11am seminar for a “flat stomach” with Serbian Alex. He’s an energetic character with a great delivery style. It was fairly identical to the detox seminar and you could almost smell the despondency. He gave me a free consultation the other day and put me on a machine that measured everything. Well, nearly everything.

Honningsvag is the main cruise terminal in the North Cape. There’s some dispute over where the northernmost part of continental Europe actually is (you’d think it was a simple case of latitude). Most of the tours have gone there today but like most things the ship sells, it wasn’t value for money. I ended up walking around town on my own and it was cold. Bloody cold. Everyone was in ski gear and this is their summer. The church was cute and reminded me of Little House on the Prairie and the cemetery next door had some of the most unusually shaped headstones I’ve seen during my cemetery touring days. Walking around Honningsvag I couldn’t help noticing just how damn ugly the place was. In fact it makes Trondheim look like an architectural masterpiece. I wasn’t sure why anyone would live here but then again I think that about Leicester.

Then I happened across a small theatre which had a 40 minute show called Our Northernmost Life (running from June 5th (today) to 10th of August) with some young local actors. The stage was inside a coffee shop and it had a real amateur feel about it which was just perfect. The slogan on the billboard was “how on earth can you settle down and enjoy life on 71 degrees north on a desolate windy island with the North Pole as your closest neighbour”. I was keen to learn but I suspected that sex and knitting were popular pastimes.

The show was a lot of fun and despite the weather I got the feeling that there was a real sense of community there. Oystein who had written the performance said he moved North from Oslo 30 years ago. His son was one of the actors and both of them were Arsenal fans. He said that he really felt “needed” in Honningsvag and I did wonder whether it might be the co-dependency capital of Norway. They certainly felt proud of their northernmostness and for not needing air conditioning.

The number one trip advisor recommendation to do in Honningsvag (they only list 7) is the Artico Icebar. As the name suggests it’s a bar where you put on a special suit and have two fruity drinks, both non-alcoholic all for 139 NOK – just over a tenner. The room was like a cupboard. I declined on the basis that it was crap.

Here are some Land of the Midnight Sun stats on Honningsvag. On May the 12th the sun sets at 2 minutes past midnight and the sun rises on the 13th 20 minutes later. After that there’s no sunset until the 1st of August.
However on November the 20th the sun rises at 10:50am, it sets 22 minutes later and then doesn’t rise again until January 21st where the locals are treated to 32 minutes of daylight.

Honningsvag is 1500km above Helsinki. Norwegian legislation in 1997 decreed that in order for a place to have “city” status it needs at least 5,000 inhabitants. Honningsvag was granted city status in 1996 so it was exempt from the legislation making it one of Norway’s smallest cities with 2,500 people. The mean average temperature is 2 degrees C and in July it reaches a balmy 10C (50f).

I was back on the Koningsdam by 2pm and in need of some warmth so I headed for the gender specific sauna. As usual Pennsylvania Paul was in there, starkers. The other day I was sitting across from three of them, all with their giblets out.

We leave at 8pm tonight and two sea days lay ahead before the next stop.