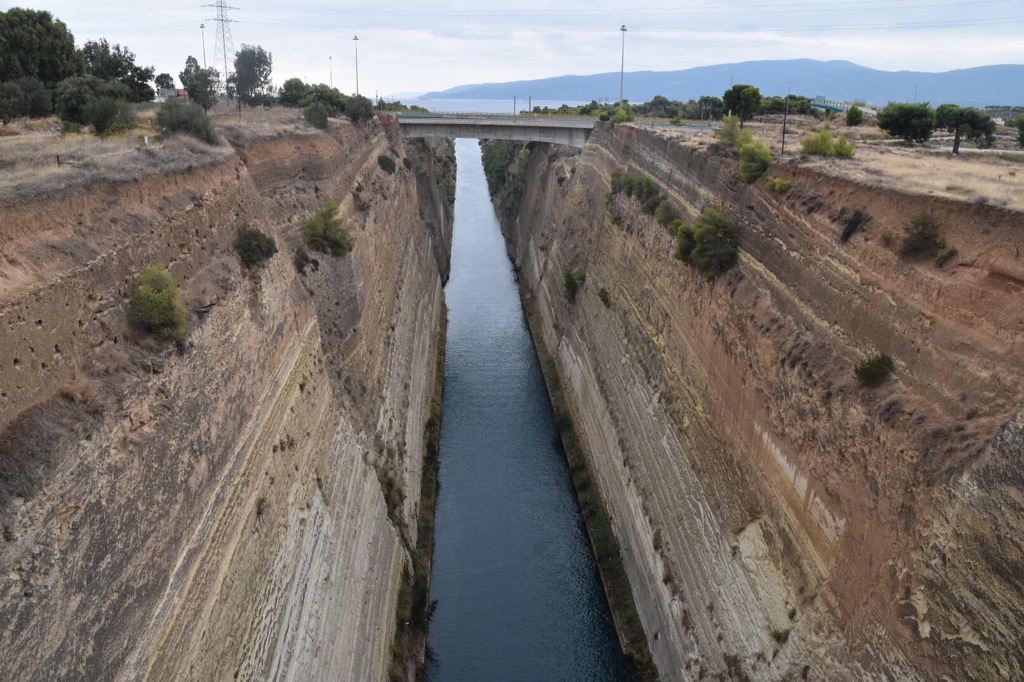 After a sea day we arrived back in Greece at the port of Katakolon which is only 20 miles from Olympia where the Olympic Games began in the 8th century BC.

We were not booked on an official tour but were reliably informed that there were a number of options once we disembarked. We had a choice between a taxi or a coach with a local tour company. We chose the coach and managed to beat them down from ten euros to nine euros! The frugality of my group knows no bounds. The coach was on its last legs and the driver was interesting to say the least. It was nine euros for a reason.

So we headed off to Olympia which I was excited about. We departed to the sound of Zorba the Greek for the 30 minute ride.

The ancient Olympic Games began in 776 BC and ran every four years for the next 1169 years covering over 290 Olympiads until in 393 AD they were banned by Emperor Theodosius I as they were considered Pagan and Rome had since embraced Christianity. Those keen mathematicians among you may realise that 1169 is not divisible by four. I offer no explanation.

The games initially lasting just one day were only for men and naked men at that. The various Greek villages sent their best runners and fighters and synchronised swimmers to compete. Women weren’t allowed to compete or even to watch and if they were caught the punishment was being thrown off a cliff. Emperor Nero competed in 67 AD and curiously won every event he entered including the chariot race despite falling out of the chariot. The torch relay has started from Olympia at every modern Olympic Games since Berlin in 1936.

We strolled to the stadium where the first sprint events were held in the very first Olympiad and I was able to stand in the starting blocks and actually run from one end to the other and then back again. Whilst I had the advantage of advances in footwear technology, I dare say I was a lot slower than those naked men of Ancient Greece. Within the archeological site of Olympia are the Temple of Zeus and the Temple of Hera.

Then it was the Olympic Museum which was just about right. Not too many pots and some good info about those early games.

On Thursday we arrive back in Athens and two thirds of the passengers are getting off and 500 new ones boarding. Luckily Brenda, Susan and Diane are remaining. Many have been on since Barcelona 30 days ago and done back to back cruises.

The ladies were off the visit the sights of Athens so I jumped in to a taxi and headed off to Corinth on my own. Over 100km so this was going to be expensive. My taxi driver was George the Greek Millwall supporter and he drove like there was a woman in the back seat going into labour. He had five kids and lost his wife two years ago at the age of 49 although I’m not sure how she died. He was pointing at lots of different body parts and doing hand gestures. He said that yesterday was a bad day but today was a good day and kept kissing his rosary. As I saw the meter soar I realised why this was his lucky day.

We stopped at the ancient city of Corinth and I have to say I really do like walking around ancient cities. I much prefer a good ruin to a rusty old spoon in a museum. I asked George to wait and as he saw me as the golden goose he wasn’t about to disappear anywhere. He asked for directions on six different occasions during our four hours together. Every time we passed a church George would make the sign of the cross. He may have been a chain smoker, clueless about where he was going and a reckless driver but at least he had religion.

We headed for the Corinth canal which was my real aim for the day. At 4 miles long it connects the Gulf of Corinth with the Aegean Sea and serves as a maritime shortcut saving 430 miles. It was first used in 1893 and now has little commercial use due to its width of only 70ft. It effectively made the Peloponnese peninsula an island. There are two roads and a viaduct which cross the canal which rises 90m above sea level and is a visual spectacle worthy of a Wow!

On the way back I’d already blown the budget so I headed for the Panathenaic Stadium in Athens where the first modern olympics were held in 1896. Well the athletics events at any rate. The word stadium comes from “stade” which is a measurement of approximately 185 metres. I walked round the top rim and then circled the track as I contemplated my Olympian encounters of the last two days. All I needed was a magnet.

George dropped me off at the port and I was relieved of the best part of €300. I could have bought one of the smaller Greek islands for that. Anyway, glad to do my bit for the Greek recovery I headed through customs which was the most painful experience I’ve had in a while. I loathe inefficiency and the Piraeus port staff are dreadfully inefficient. It took ages for three ship loads to get through the X-Ray machines and I vented my spleen at the moustachioed woman at the end. It’s not as if they’ve got full employment. So after ruffling Anglo-Greek relations just a tad it was back on board for the afternoon safety drill which they do every time new guests arrive. It’s all about what we should do in the event of an emergency. It’s very unpopular but necessary.