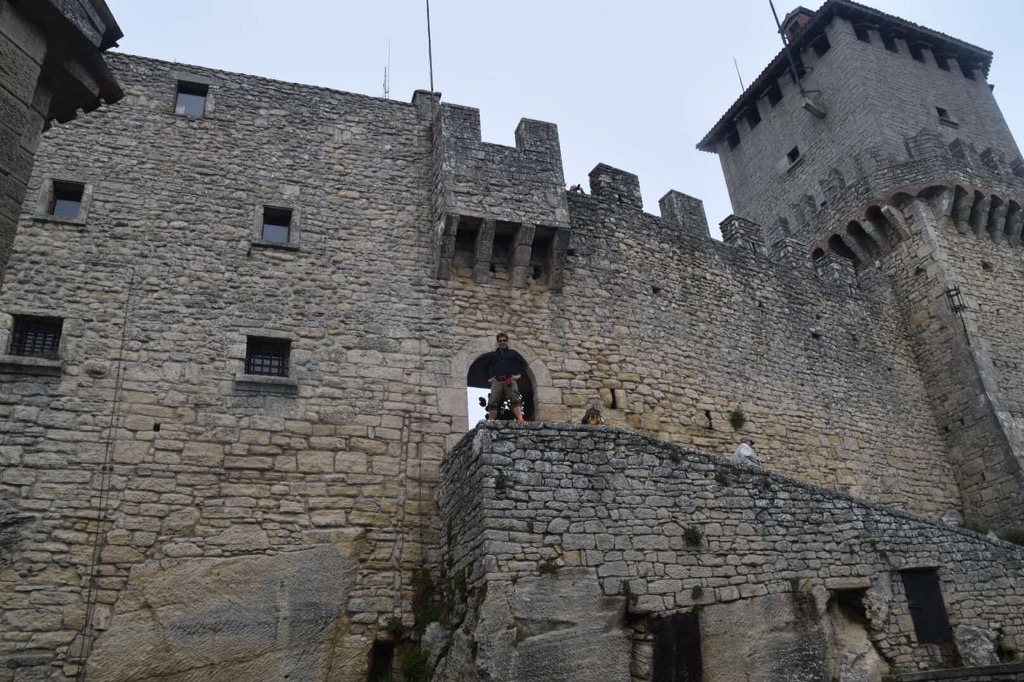 We stopped at the Italian port of Ravenna and I was torn between the Ferrari museum in Modena in one direction and the Republic of San Marino in the other. San Marino won (which is something you don’t hear very often).

San Marino is the fifth smallest country in the world at only 24 square miles and it is said to be the oldest republic in the world founded in 301 AD. It is sometimes referred to as The Most Serene Republic of San Marino which is quite lovely. The five of us – Brenda, American and Susan, Darlene and Harry, Canadian walked around the narrow cobblestone streets of the medieval walled city of San Marino which is the capital of RSM. The city towers over the surrounding areas and the views would have been terrific if there hadn’t been so much fog. Couldn’t see a thing. We had two hours but ideally three to 4 would be perfect to see all the castles and churches. It looked a very moneyed place with lots of banks. There were also a number of shops selling weaponry – guns, knives, crossbows, rifles, as well as camouflage gear which was a little odd.

It was a great place to visit and I would recommend it to anyone passing by. My sauna friend Don went to the Ferrari museum and wasn’t overly thrilled as they didn’t have a 246 Dino or a Testarossa (his favourite). I made the right choice and notched up country number 49 (25%).

At dinner we discovered unsurprisingly I guess that I was the only one whose parents were still alive although only just in the case of Barbara, 79, whose mother lived to 100. Oh we talk about cheery things.

Some San Marino facts. They are 201st in the FIFA world standings and the population is 33,000. Two unrelated facts for you there. The San Marino Grand Prix ran from 1980 to 2006 but there hasn’t been one since. The track, Imola is actually in Italy but because they already had an Italian GP at Monza they decided to call it the San Marino GP. I happen to think that’s a little cheeky. Anyway the last one was in 2006 because they needed to make room for Belgium. Although not in the EU, San Marino uses the Euro!