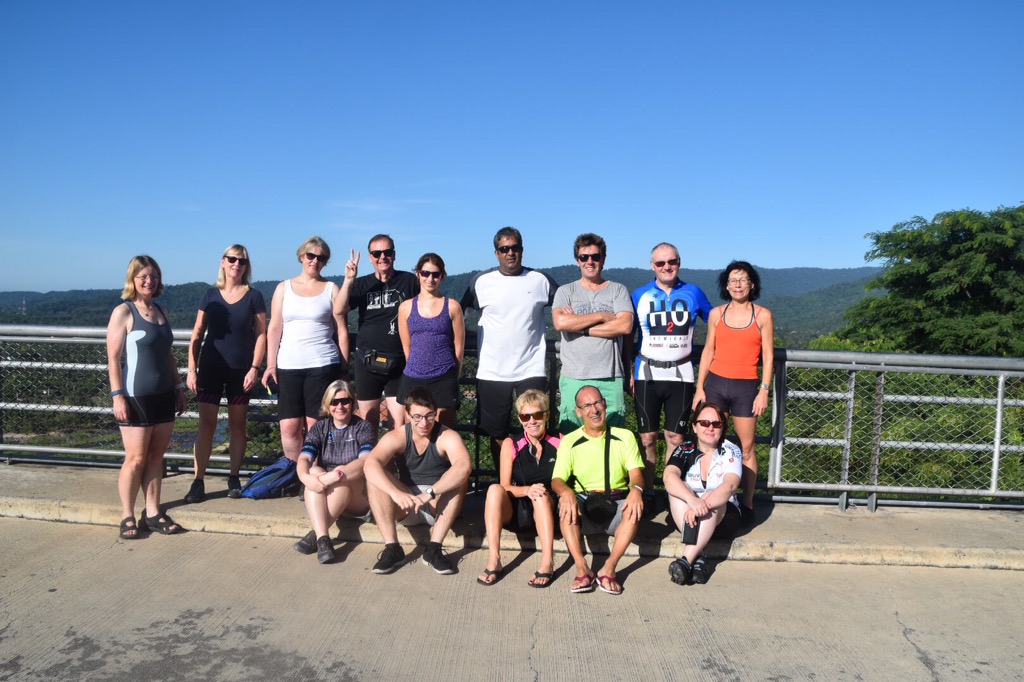 Our cycling group met on Sunday afternoon in the hotel lobby. There are 14 of us: 6 men, 8 women ranging from 21 to 63 years old and already I sense some blog worthy moments ahead. Our tour guide is a Thai chap named Tom. His English is only passable but he looks good in Lycra which is far more important.

We all went to dinner in a busy street nearby called Khaosan Road and afterwards I seemed to be the only one who wanted to stay up. It was 8pm! So I took a tuk-tuk to somewhere he wanted to take me, honest. It was basically a supermarket full of girls but it wasn’t my thing so I left and got another ride to Soi Cowboy which is one of the main red light districts of Bangkok. Soi Cowboy is a single street 150m long packed with clubs on both sides all trying to lure passing men. I found a spot outside one club and had a glass of wine and just people watched. It was all very interesting to see this place but I didn’t stay too long. An observational visit!

We were all raring to go on the first day of cycling and our guide took us across the city to the backwaters of Bangkok in a district called Bang Kra Jao which was an absolute delight to cycle around. Although we were still in Bangkok, we could have been deep inside the country. One of the trickiest parts was cycling along the narrow elevated walkways that traverse the canals. Lunch was a fairly primitive affair with every meal looking identical despite the supposed choice. The communal dessert was slices of sour apple that you dipped in sugar and chilli. An assault on the senses if ever there was one. It wasn’t a winner.

Back at the hotel we had a few hours off before our evening ride through the urban jungle of Bangkok. We left at dusk and within minutes we were weaving our way through Bangkok’s notorious traffic. What Tom’s route lacked in aesthetic beauty it more than made up for in variety as we cycled over bridges, down busy roads, through alleyways, up back passages not forgetting more elevated walkways passing by houses and shops in what one might describe as hidden Bangkok. Some of it should remain hidden but overall it was a memorable experience that combined exhilaration with fleeting moments of enjoyment and of course the odd noxious smell thrown in however I wouldn’t want to do it again. I couldn’t tell you where the ride took us. No idea. Not a clue. Wherever I go I like to get my bearings but because of the size, the absence of well known landmarks and the lack of a defined central area, Bangkok is quite tricky get to know. Not to mention the river Chao Phraya which is bendier than an acrobatic snake.

We left Bangkok and made our way out of the city towards the Khao Yai national park en-route to the Cambodian border. The tour notes suggested it would take 1.5 hours but it took 3. Not because of traffic but more of an admin error in the notes! When we arrived our first port of call was a waterfall which was very mediocre but the exercise was welcome – 4 thousand steps. When the bikes arrived we were all super keen to get going after several hours on a bus. The first 10km were downhill followed by some more Thai food which I’m struggling with. I may lose weight on this trip. After lunch we had another 40km to cycle in the afternoon heat and it was fairly gruelling compared to the easy pace of the day before. I must have sweated my body weight. The scenery was very pretty in parts and rural countryside would suddenly be interrupted by an ornate temple in such random fashion. Temples really are dotted all over the place. We must have cycled passed a dozen today. We cycled all the way to our hotel stop and arrived at the Sida Resort just after 5pm. I don’t think they get many English tourists and it certainly wasn’t set up for a western clientele. I booked a massage straight away and minutes later I was in a pair of silk sky blue pyjamas being manhandled by an 80 year old with fierce fingers. It was hellish at times but at least it only cost £6.

We left the resort and headed for the nearby dam which is Thailands largest and also has the record for the longest dam wall at over 2700m. Then we were treated to a two hour drive before meeting up again with our bicycles after which we did a series of rides of varying length through the hot and humid Thai countryside. Lunch was another bland experience so I opted for two packs of crisps and some doughnuts from a local shop.

We ended the day 15 miles from the Cambodian border at the Indochina Hotel which was another three star establishment where none of the staff speak English but it did have a superb pool so we frolicked for a while before the mosquitos arrived.

Three days cycling and I’ve got tired legs, a sore arse and an irrational fear of 80 year old Thai women but I can’t complain. The group know about my blog which is preventing me from being rude about them. I should have shut the f*** up.