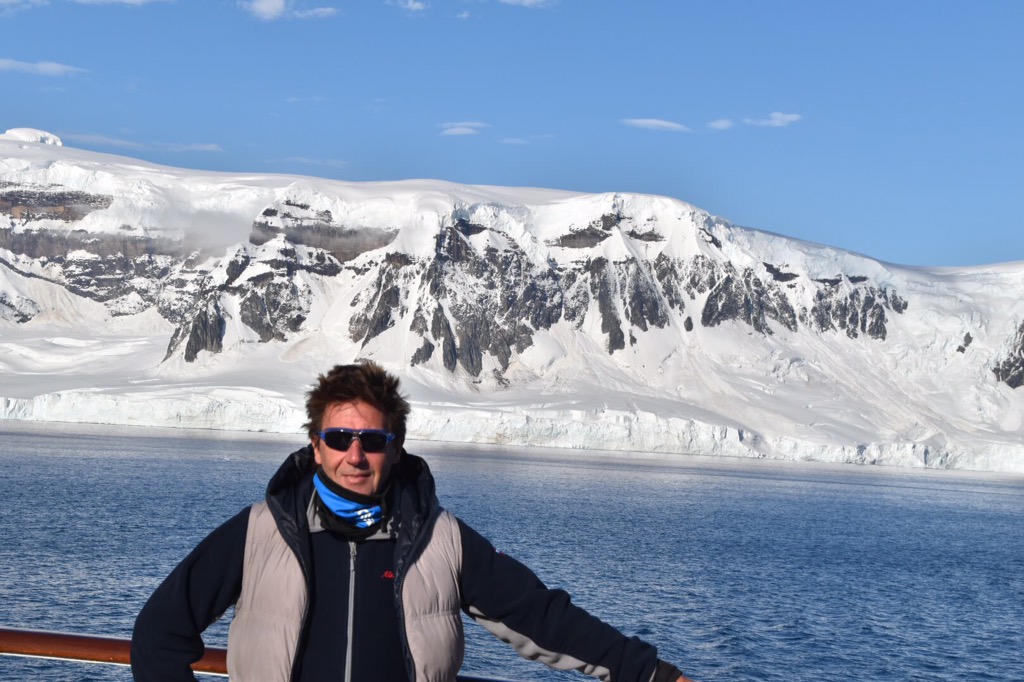 On Sunday evening we started our journey towards Antarctica where we will arrive on Tuesday for three days of scenic cruising. In preparation for this a series of lectures began on Monday about various Antarctica related topics and the theatre was packed. So armed with some fascinating facts this is what I can report.

Antarctica is the coldest, driest, windiest and highest continent on the planet. We vitised the Antarctic Peninsula which is the warmest part but I think they actually meant least coldest. Of the 28,000 species of fish in the world, only 120 are able to live in Antarctica and the ones that do produce antifreeze molecules. There are no sharks that have adapted to Antarctic waters and other species such as starfish, sponges and jellyfish grow much larger than in other oceans – starfish with a 3ft diameter due to the increased levels of oxygen in the water.

90% of the world’s ice and 70% of the world’s fresh water can be found in Antarctica. It has a total surface area of 5.4m square miles which I know means very little to you so by way of comparison, twice the size of Australia. During the winter months the total area doubles in size to 11m sq miles when sea ice 6ft thick spreads from the coastline into the Southern Ocean. The temperature from March to September averages -60 C or -76 F and in their summer from October to February it warms up to -31 C or -23 F. The record low, for those hungry for more statistics was -89 C or -129 F. The wind regularly gusts at 180 mph (hurricane speed officially starts at 74 mph). Thirty countries maintain research centres that make up a summer population of 4000 and the winter population of just 1000. The ice is up to 1.2 miles thick and underneath the ice sheet are liquid lakes and free flowing rivers. There are no trees.

Our crossing was disappointingly smooth as our lecturers confirmed. One of them who has been to the Antarctic 90 times has experienced swells of 50ft during the crossing. From Cape Horn to Antarctica was about 500 miles and the Southern Ocean starts at 60 degrees below the equator. We had a Wandering Albatross following us for a while which has the largest wingspan of any bird at 10ft (condors are second). The record for a single flight for an albatross is 146 days and 10,000 miles.

At about 7am we arrived in Antarctica and I could see the dramatic scenery from bed. I got changed quickly and headed for the outside decks. Wow! Spectacular, awesome, magnificent, wondrous – just a selection of words that may have been better than my initial choice of f**k. This eclipsed anything I had ever seen before – the Grand Canyon, Norway, Beachy Head. About a hundred metres off the starboard side a pod of humpback whales were feeding on krill. With blue sky and a few strategically placed clouds the weather was perfect. Well, apart from the zero degree temperature and the 30mph wind it was perfect.

At 1:30 eleven people from a nearby research station came out to meet us on Zodiacs and came aboard. During their time onboard they can use all the facilities including getting haircuts and eating as much as they can fit it. The US runs three permanent research stations in Antarctica and our visitors came from the Palmer Research Station which is the smallest of the three stations and home to a summer population of 44 people. The largest station is called McMurdo Station which has 1000 people during the summer months. They work nine hour days six days a week and assignments vary in length but can be anything up to 12 months. The gender split at Palmer is currently 34% female with researchers split 50/50. They get about five or 6 cruise ships a year and go onboard and give lectures about life at the station. Each station has a chef and a doctor and if someone needs evacuating for medical reasons the cost of a C17 is about one million dollars.

The third American station is at the South Pole at the Amundsen Scott Station where there is a small unassuming pole stuck in the ground which marks the geographical South Pole. As this station isn’t coastal it has an airstrip allowing the C17 aircraft to land. Some of the more unusual species in Antarctica are the ice fish which has white blood and is the only vertebrate with no hemoglobin and the wingless fly which is officially the largest creature living on Antarctica at 3mm long. It can survive without oxygen for several weeks at a time.

The late afternoon was taken up with more breathtaking scenery as we passed some pretty unbelievable rock and ice formations. Even Joanie who spends six months a year in Alaska was blown away by this place. We sailed by seals laying on icebergs, a minke whale and some penguins in the distance. The water was so still and the wispy clouds and blue skies made it so photogenic.

Another early start and reports of a humpback whale completely breaching the surface were going around the ship. The penguins and seals have been relegated in importance as the whales takes centre stage. What we all want to see are killer whales but apparently we’re two weeks too late but the hope is that the whales don’t have a calendar. Of course there are some mad keen penguin lovers onboard, often to a psychologically disturbing degree. In total we have four stops where a penguin excursion is on offer and some people who shall remain nameless (Julie and Tim) are seeing them all four times.

The scenery was just as good if not better than the day before and again we were blessed with great weather which apparently is quite unusual. I was in the hot tub on the back deck for a while and when there was a whale sighting I was able to hop out, grab my camera and head for the sides in just my shorts. I got some funny looks from my togged up fellow whale watchers but they soon lost interest.

The mood and spirit on the ship these past few days has been excellent as we share this once in a lifetime experience. Well all except that cantankerous old bint with the walker who seems to have alienated everyone she’s come into contact with. I tried to offer her assistance the other morning and was sent off with a flea in my ear so I’ve taken her off the Christmas card list.

I’ve started playing evening trivia on my own and I came second the other night. I’m determined to win one night at which point I will do a lap of honour round the bar and retire. Blackjack is going well and I’m making steady progress. I give myself a target every evening and stop once I’ve reached it. That way I’m always leaving on a high.

Thursday was our last day in Antarctic waters and the we cruised the Antarctic Sound in search of interestingly shaped icebergs. The various viewing locations were busy as usual especially the inside bar at the front where I’m sure some people have been camped out for all three days. They get a good position and stay there. We have had to be very careful with environmental issues whilst here in the Antarctic and plastic cups and glasses have been banned from outside decks and the smokers area on the back deck was closed. We were also advised not to throw anything over the side which is standard policy anyway.

The past three days have been utterly incredible and I would highly recommend visiting this place if you get the chance. The fact that we didn’t set foot on land matters not a jot. We’ve been to Antarctica regardless and in many ways it is best experienced from the sea (especially a warm, comfortable cruise ship with plenty of cookies). Could I spend four months here at a research centre studying the mating habits of the wingless fly? Yes I probably could. This was the highlight for many passengers so it’s only downhill from here. Next stop the Falkland Islands 730 miles away.