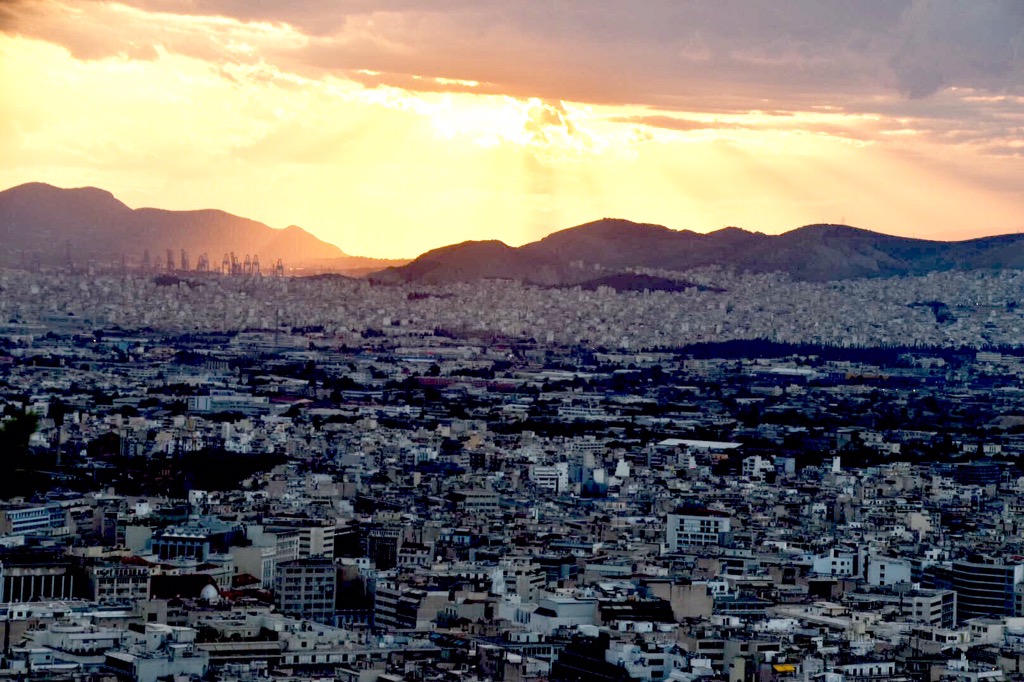 From landing at Athens airport to getting into a taxi took 17 minutes which was a personal best. First in the passport queue, bags came off almost immediately and off I trotted to the taxi rank where Mikis was waiting to take me to the Novotel. Although better than my two word Greek vocabulary his English wasn’t great so we smiled a lot at each other and every now and then he would point at something and I would nod and make a variety of agreeable sounds from my bovine repertoire.

After checking-in I headed straight for the Hellenic Motor Museum which was near the hotel but it was closed and looked very unloved. So I went strolling in the general direction of the Acropolis not realising I was staying in a less salubrious neighbourhood of Athens. Anyway after quickly spotting some miscreants I put the camera away and adopted a more appropriate demeanour. It was rather warm so after popping in to a few menswear shops to familiarise myself with current trends in Greek fashion I jumped into a taxi and met Angelos. Born in Albania to Romanian parents he moved to Athens 25 years ago at the age of two. Fabulous English, stupendous Greek and wonderful Romanian.

He works a 14 hour day and for that he earns €40 net. He owns the car but doesn’t have his own taxi licence (which would cost him around €60,000) so he rents one from a woman he knows who never actually drove taxis herself but her husband once did and she owned the “licence to operate”. Angelos pays her €1000 a month so she is making 20% per annum on her investment. Because he has to pay her, plus €500 for insurance and €600 for fuel, he never earns enough to save towards buying his own licence and as his car is 12 years old and Athens has a 15 year old car limit, he has a secondhand Skoda to purchase in a few years too. Nothing like a bit of ambition. He basically earns €3 an hour. He’s not alone though.

Apparently this is the norm for taxi drivers in Athens in terms of NOT owning their own taxi licences. The government aren’t issuing any more licences so he would need to buy one from someone else off the internet. All sounds a little bonkers to me.

Anyway he dropped me off near to the Acropolis museum which had been highly recommended! It basically contains four and a half thousand antiquities. Pots, urns, statues with missing body parts and some old rocks. The building itself is lovely and the entrance fee was a modest €5 but I’ve come to the sad conclusion that I am just NOT a museum person. I say sad because I really do feel that I’m missing out on something. A bit like not getting the musical genius of David Bowie. I end up people watching and wonder if they’re thinking the same thing as me or whether they actually appreciate, and I quote a statue inscription, “the Kore wears a chiton and a long mantle that falls symmetrically over both shoulders”. It would take a week to read every inscription on every piece, so how do you decide which ones to read? How do you differentiate one pot from another or discern which mutilated statue deserves your attention?

The temple of Zeus and Hadrian’s Arch were nearby so I took my life in my hands and crossed the road. Athens isn’t pedestrian friendly. Relieved of a few euros at the gate, it was a rather scruffy place considering the importance of big Z. However walking through the Plaka which is a district adjacent to the Acropolis, was splendid. A really marvellous couple of hours before Angelos came back for me. He took me to the highest hill in the city which turned out to be the Athenian equivalent of Inspiration Point (from Happy Days) and I took some fab photos of the sun setting over Athens, home to 5m of the 10m people of Greece.

Back at the hotel I had aperitifs (I’ve gone all continental) and gyros at the rooftop pool bar and all was good in the world.

I awoke early and headed off to the Acropolis for 8am because the guide book said “get there early before the crowds” but it turned out that we’d all read the same guide book. However arriving early did mean we were treated to what I will call “the ceremony of the flag” where a soldier carrying the Greek flag followed by six more soldiers with guns do this slow pigeon step march from the entrance to the flagpole which should take about 5 minutes but they drag it out to 20. None of us were allowed to overtake them so there was a slow moving crowd following the slow moving soldiers. At the top before raising the flag they sang a song which I presume was the national anthem. Awful singers.

So I saw the Parthenon, the Temple of Athena, the Theatre of Dionysos (oldest in the world) and the Temple of the Erection (which I was glad to see still standing). Then down the slope towards Hadrian’s library. Most people can fit their entire book collection into a few shelves but not Hadrian. Oh no, he needed a building the size of a football pitch. Then it was the Agora, the Temple of Hephaestus and the Stoa of Attalos which were all great to walk around in the sunshine until I asked a young girl called Kyriaki what was the difference between a temple and a stoa. After 20 minutes I started to wonder if I was going to make the ship. She’d mapped the whole day out for me and when I tried to move on she came after me. Then as I was leaving there she was again. I reckon she’s a part-time stalker. I missed out on the Museum of Traditional Pottery but a man can only have so much fun in a day.

Angelos (my new best friend) met me at 1pm to take me to the ship. Continuing on from our chat the day before I gleaned the following. Uber is deemed illegal in Athens and taxis are cheap anyway; the average salary according to him is about €8000 per annum (so he’s doing well at about €12,000), and most Greeks were happy that the UK decided to leave the EU (they do not have a favourable opinion of Germany’s role in the EU either).

A very enjoyable 24 hours in Athens. I will return not least to visit the pottery museum.