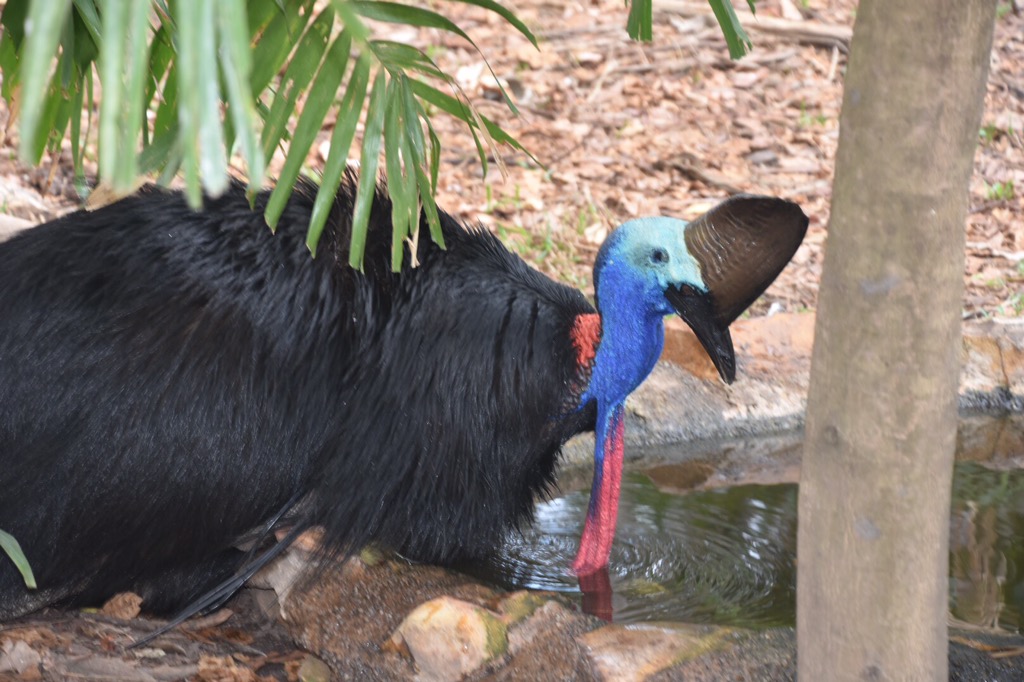 We had three days sailing after leaving Cairns, first through the Barrier Reef before rounding Cape York at the top of Australia, through the Torres Strait which separates Australia and New Guinea, over the top of the Gulf of Carpentaria, through the Arafura Sea and finally arriving in Darwin. I hope I made that sound adventurous and exotic. We also had one of those rather confusing half hour time changes making us 9.5 hours ahead of London. I think India also has a half hour one somewhere. Personally I think they should be banned.

Darwin, named after Charles Darwin has slightly fewer people than Cairns and is the 15th biggest Aussie city. It’s the capital of Northern Territories which as the name suggests is a territory. Australia has six states – New South Wales, Queensland, South Australia, Tasmania, Victoria and Western Australia, and two territories – Northern Territories and Australian Capital Territory abbreviated to ACT which is basically Canberra.

Since the night sailing to Sydney when we all thought we were going to die the seas have been smooth and as we sailed towards Darwin they were even smoother. As our captain called it a “glassy sea surface” which sounds high amusing in a Dutch accent. Try it.

I was really looking forward to Darwin for some reason. Even though Australians I’d mentioned this to were not necessarily full of praise, (akin to a foreigner with a hankering to see Leicester in all its glory) I’d kept my dream alive ever since watching Australia with Hugh Jackman and Nicole Kidman. Blistering heat, cloudless skies, dirt roads, wooden low rise buildings where men are men and sheep are nervous. Well I should have listened to them. Darwin won’t win any awards for architectural beauty or much else for that matter. Other than being the start point for the Ghan, I wouldn’t feel a strong compunction to return.

Ben, Astrid and I went out for the day and our first well chosen destination was the Crocodylus Zoo which as you’d expect in Australia had a collection of weird and wonderful animals. My favourites were undoubtedly the meerkats (who were just like Sergei in the adverts) and it was my first sighting of a cassowary (pictured) and a banteng. Not overly excited about that. The way out led us through a room with animal hides and stuffed big cats before hitting the gift shop which sold crocodile meat. No one could accuse them of wastage at this zoo. It was average at best. Next on our jolly day out was the aviation museum which I quite liked because it had a B-52 on display and you don’t see one of those every day. Darwin was the site of the Japanese air invasion in February 1942 and it played a strategic role in the battle of the Pacific so there were lots of WWll exhibits. The other two didn’t seem to share my enthusiasm and excitement for the General Dynamics F-111 or the Dassault Mirage so it wasn’t long before we headed back to the city and our Indian taxi driver deposited us next to the parliament building. The sky had been darkening for a while by then and the rumble of thunder had been getting nearer. Darwin has a reputation for electrical storms.

About two minutes after we left the protection of the taxi the wind picked up a little, then a lot and then we had to run for it. From the sky just being rather dark to a mini hurricane took about 20 seconds. People from everywhere were running for cover. We were hiding behind a circular pillar which wasn’t the best place to be when battling sideways rain. After twenty minutes of watching in awe, we noticed that we were right by a mall so we took our soaked bodies inside in search of a Dyson Airblade.

I’m not sure why anyone would choose to live in Darwin. Even those who are born there they can vote with their feet but nonetheless, 150,000 curious souls make it their home. The fist two people I spoke to were originally from Ireland. Gladys moved there in 1969 and loved it. Perhaps it was the ovenlike temperatures, the 90% humidity or the box jellyfish season (October to May – DO NOT ENTER THE WATER) that attracted her. It was 93 degrees the day we were there and as the Monty Python sketch put it, it was hot enough to boil a monkey’s bum. Despite an 8pm departure we were back on the ship by 3pm. Walking around in sopping wet shorts does have enjoyment limitations.

Ship life is good and I become more institutionalised by the day. Ben, Astrid, Richard and I have laughed to the point of near leakage. It’s been an absolute hoot since Sydney. The casino has been fun as usual. The staff get to know the regulars and I cannot deny that that does not include me. Having said that, I’ve gone a lot less than in previous trips; sometimes going as long as five days without the mere hint of a shuffle. My favourite dealer is a chap from El Salvador coincidentally called Darwin, but they’re all good. I’m convinced Dalibor’s girlfriend Maria started life with a penis though. The other day I inadvertently said “thank you sir” when she changed up my chips. Easy mistake to make. Next stop Komodo.