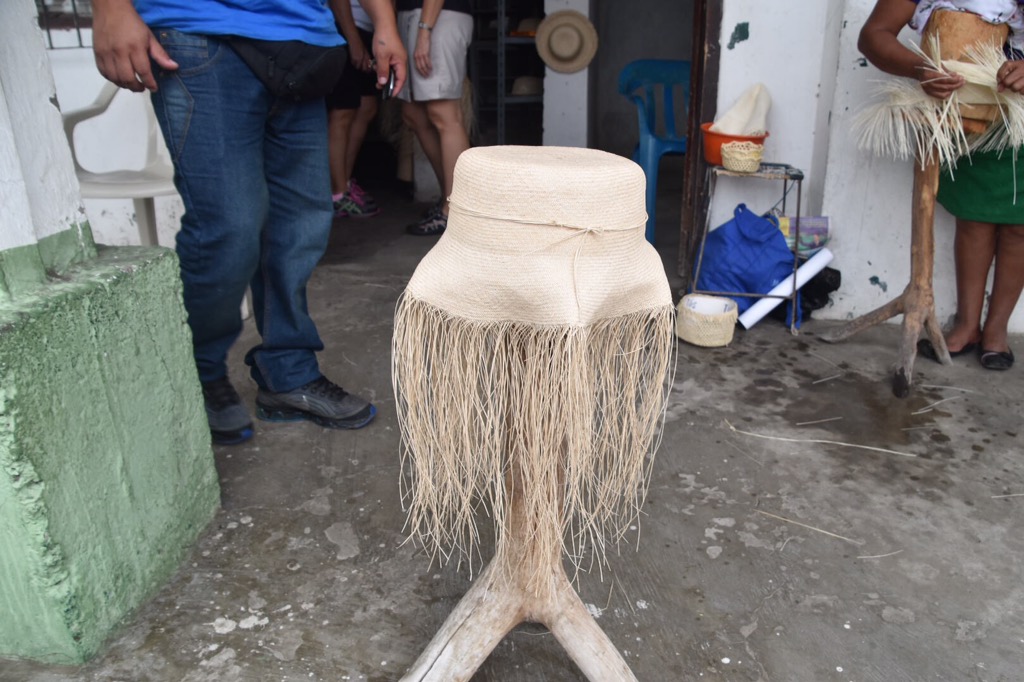 Our only stop in Ecuador was a port town called Manta which is apparently the tuna capital of the world. Sounded a bit fishy to me so I googled it and it was true. There are statues of tuna all over the town which was a little disturbing until we saw the statue of the woman with the big boobies making a Panama hat which was even more disturbing. Ecuador is the only country in South America that has the US dollar as its official currency after switching from the Sucre in 2000.

I was supposed to fly to Quito for the day but the weather forecast wasn’t good and Quito is 9000ft above sea level so the temperature plummets from 80 on the coast to about 60 in Quito which just isn’t on. Instead I ventured out with the team – well 8 of us and we jumped into a minibus and headed for the button factory. Not my idea I hasten to add but two of the ladies, Julie and Joan were intrigued enough so off we went with Fernando, our vertically challenged, non-English speaking guide. My very low expectations were surpassed at the factory which was off the beaten track. As we entered the compound and the gate shut behind us we all had thoughts of kidnapping and ransom demands. We really were at their mercy. Anyway that didn’t happen and the 20 or so workers we saw performing various tasks on lathes, bandsaws and drills were extremely proficient.

We then drove to Montecristi which was a colonial town founded in 1628 and also the centre of the Panama hat industry which incidentally are of Ecuadorean as opposed to Panamanian origin. A few of us made a purchase for the Panama hat evening on the ship (oh, we know how to have a good time).

Following the hat shop we drove an hour south still in the province of Manabi to a national park called Machalilla which was averagely lovely and we found a spot by the sea for a late lunch where Sheryl and I shared a most curious bottle of warm Argentinian wine.

By the time we arrived back at the ship at 7pm it was dark. We had reached a point in the cruise where we will have more daylight hours than not which is good news for all the SAD sufferers on board. You wouldn’t believe how many people are here escaping a cold miserable winter in the US or Canada. Or maybe you would. Later that night we crossed the equator of which 79% is water leaving 21% of the equatorial line traversing land. Nice little fact.

A few nights ago I sat next to Annette on the blackjack table. She’s travelling alone and at 94 is one of the older passengers. Completely random blackjack strategy but it didn’t stop her doubling her money.

The folks on my table are as follows.

Lydia, 56 – was on the World Cruise last year, born in Louisiana and worked as an accountant for the Louisiana Riverboat gaming company which relocated her to Las Vegas where she has lived ever since. Now retired and cruises a lot. Great fun.

Sheryl, 60 – room mate of Lydia they met last year on the WC. She boarded in Hong Kong where she’d worked for 9 years as a Gemologist. She’s now retired and lives in San Diego.

Bob, 89 – Lydia’s dad still lives in Louisiana and used to teach bridge on ships so has taken dozens of cruises. He spends his days playing bridge and. He’s a big deal on the bridge circuit in his home state. Great sense of humour.

Deanna and Anthony were on the WC last year with their son Keegan. They live in Delaware not far from outgoing Vice President Joe Biden who Anthony knows. Deanna is the same age as me and Anthony a year older at 52. He was retired from the police at the age of 28 after a bad fall which still affects him today. He can be hilarious and they are a fabulous couple.

Tim and Julie 64 and 53, were also on the WC last year although I didn’t get to know them. My loss because they are terrific and Julie is a fellow lover of spreadsheets and has the whole trip worked out for excursions and trips. They live in Minnesota.

Joan, 79 was on the 2014 world cruise so I hadn’t met her before but a fellow casino player. I think she comes from Ohio.

Joanie, 62 was on the WC last year and another casino junkie. She works for Holland America for 6 months of the year in Alaska and gets good discounts as a result. She calls home St Petersburg, Florida which is where she last owned a house but after retiring from a thirty year career at IBM decided she couldn’t keep a house and have the lifestyle she wanted so sold the house and now has the entire contents of her life in 11 suitcases, 5 of which are with her on the cruise.

I know I sometimes have a dig at the people on board for being old, oddly shaped or sartorially backward but I have to take my (Panama) hat off to them because whilst a lot of them look like the kind of people you’d avoid in a motorway service station, they’re travelling the world. They could just stay at home but they don’t. They shuffle on board and go off on an exotic adventure and they deserve my respect. We’ll see how I get on with that one.