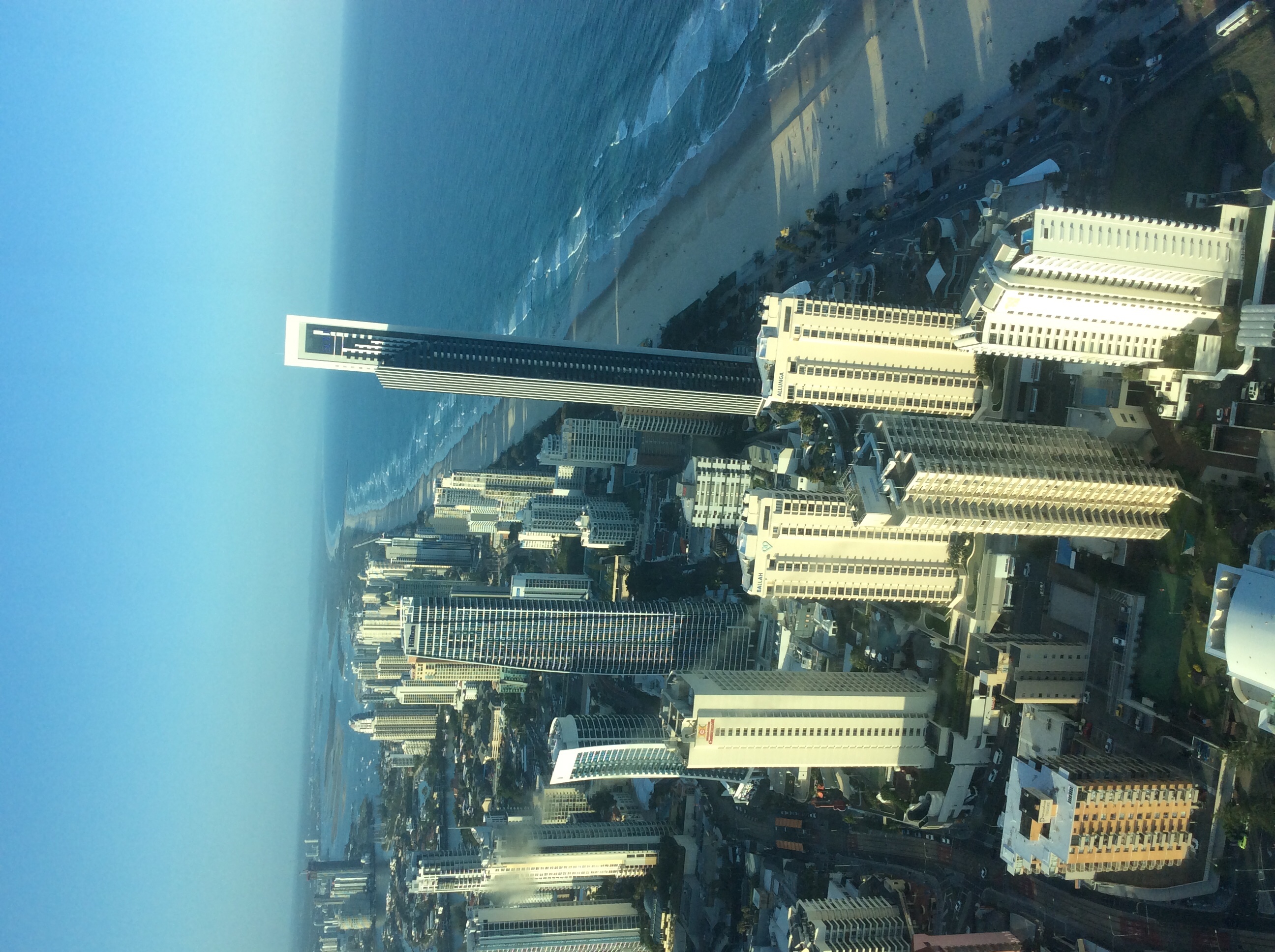 Gold Coast, in the state of Queensland, is the largest non-capital city in Australia with a population of about 640,000. 40 miles south of Brisbane, Gold Coast has become known for its surfing, high rise hotels and apartments, theme parks, nightlife and grown men on wheels. It’s not just grown men. Half the city seems to be on wheels and I’ve seriously thought about buying a skateboard so that I could join them. I resisted because I’m hurtling uncontrollably toward my mid-fifties and a modicum of decorum is expected. 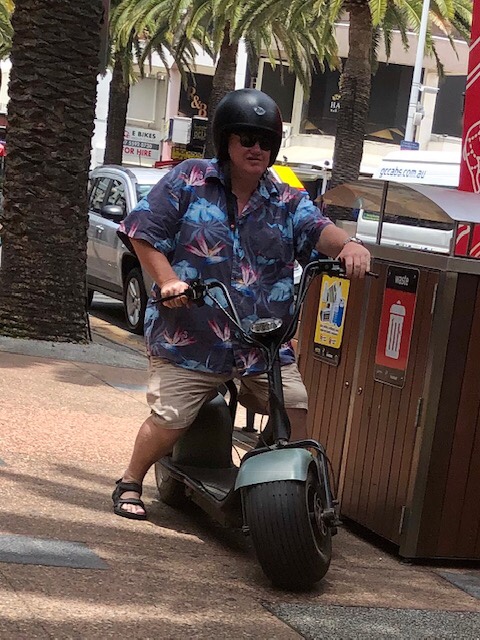 Whilst here I was able to meet up with some travel friends. The other night it was dinner with Steve (59) and Allyson – I met Steve on the Vietnam cycling trip. Steve works in health and safety and he recently did the risk assessment for the Sydney Harbour Bridge Climb which after twenty years with one company is changing franchisees this year. The present company have done well out of it. The government missed a trick and didn’t charge a fee for the franchise the first time round. It currently costs 303 Aussie dollars – £170, but the cost is expected to increase dramatically when the operation changes hands and the government takes its cut. Anyway, Steve was paid handsomely for walking around every single walkway during his five hours there. Luckily I’ve already booked at the end of the month. 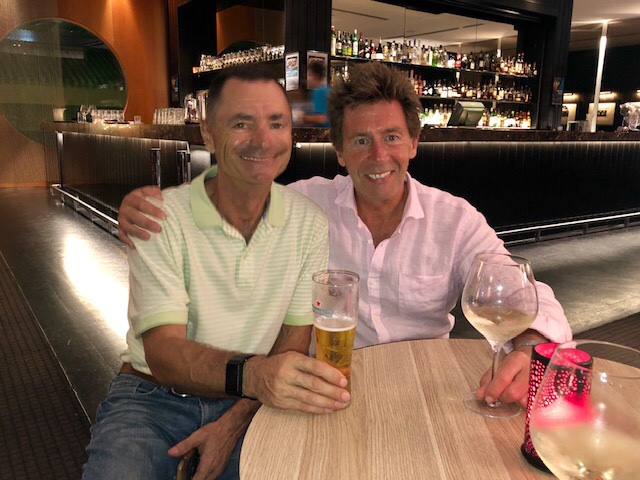 His girlfriend Allyson wasn’t on the cycling trip (not sure the tyres could have taken it) mentioned an amusing story about one of her two husbands. His son, from a different marriage, was in Canada and had an accident. He flew from Australia to Canada to be with him and Allyson never saw him again. I’m saying nothing.

I also had lunch with Ben from the Australia circumnavigation cruise in 2017. He now works as a dealer in the Star Casino and is back with girlfriend Jo although it doesn’t sound like a match made in heaven or even the greater metropolitan area of heaven. I went to the casino on the last night to see him but he was dealing in the high-roller area and I’m a low roller most of the time with the odd foray into middle rollering. I was a winner on Caribbean Stud poker (where the night before, a guy had won 36000 dollars with a straight flush and announced that he could now pay for his daughter’s wedding), then decided to put fifty bucks in a slot machine while Dimitra visited the ladies and I won 465 dollars on a feature. I had absolutely no idea what was going on but I did notice that I’d been playing for ten dollars a spin. So in just over an hour in the casino I was up 520 dollars and sensible Patrick turned up and I left.

The weather has been less than sunny (cloudy) and in all honesty if I’d checked the forecast (which I didn’t) I may not have ventured up there. I would have just flown to Hawaii early and learnt to hula. But I haven’t wasted my time here. I achieved a daily step PB the other day hitting 40,000 which is over 32km and generally kept fit and healthy with the odd alcoholic grape based evening tipple. 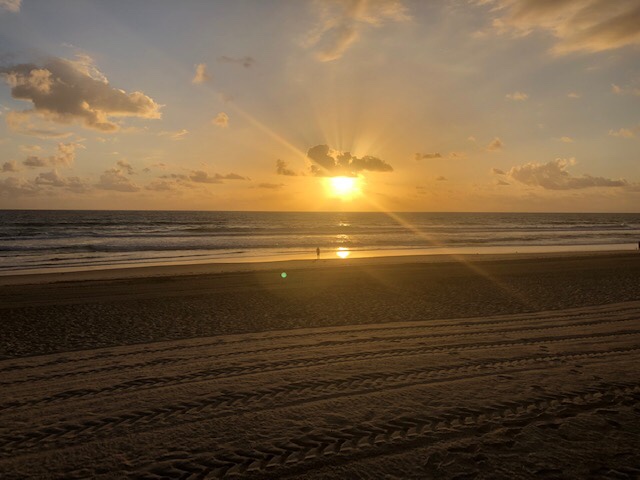 I’ve walked the long sandy beach a number of times and my favourite moment was when a Chinese family got wiped out by the unexpected rogue wave. It must be the German in me. I’ve witnessed this type of catastrophe many times and it’s the beach equivalent of playing chicken. How close can I get to the water to put my stuff where it won’t get wet? Anyway, it was hysterical. 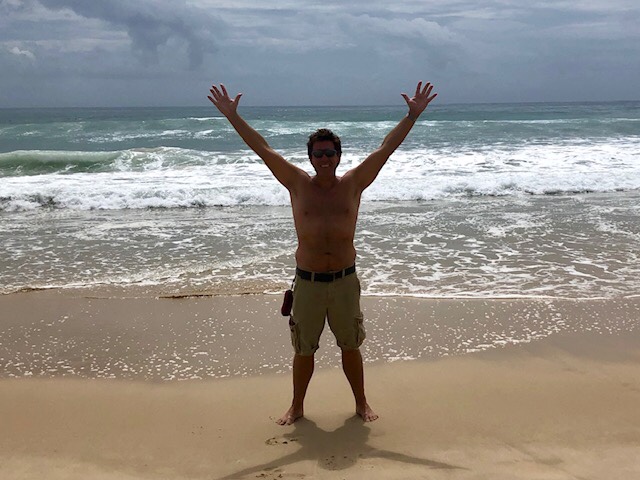 For anyone with insecurities about ageing, carrying a little extra weight, not being as “buff” as you could be or sporting unfashionable swimwear, then this is the place for you to feel truly miserable, bordering on suicidal. There are as many beautiful people here (on wheels) as in Sydney, just with fewer clothes. I did ok in the over 50’s category but I’d definitely feel better about myself if I were at a Slimming World “all you can eat” cake buffet. It’s all a matter of perspective.

As luck would have it, the sun came out on the day I was going back to Sydney. Of course I’m not moaning about my recent luck. As there were two drivers we did the 10 hour drive in one hit and I can report that the roadside facilities have not improved since 2015 and the encounter remains one of Australia’s most pungent sensory experiences.

Back in Sydney I had an unscheduled night at Dimitra’s followed by the longest Saturday I was ever likely to have. Fly west and you lose a day of the week. Fly east from Sydney to Hawaii and you get a 45 hour day which is a bit discombobulating. Ten hours in the air and you still arrive 11 hours before you left. I’m hoping for a record step count. Off to Hawaii to see Dianna.