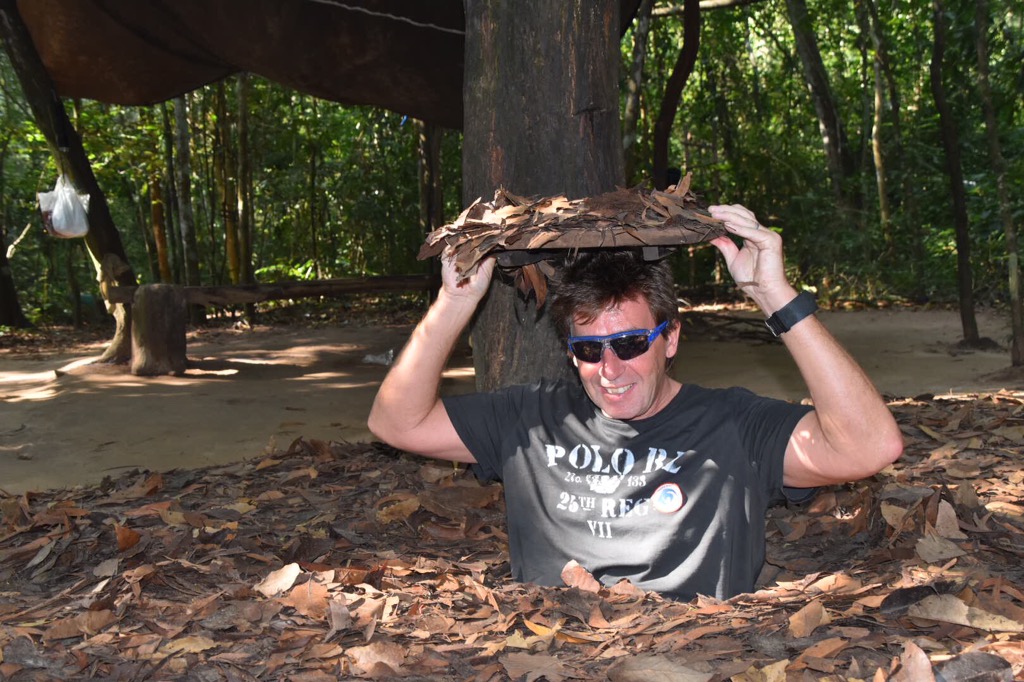 We were all excited to be finally heading to Ho Chi Minh City. I say all but Fiona is Scottish so it was a stretch for her but she did the best she could. So eager to get there we’d elected to skip lunch. On the way into HCMC our guide told us that any “positive” news reports,  the city is referred to as Ho Chi Minh City but any negative news stories and its called Saigon. Interesting that the name Saigon is a byword for evil. Another little Doan tidbit was that people are “encouraged” to have only one child although government workers are allowed to have two. Any more than 2 and their chances of promotion are severely reduced.

We arrived at our hotel mid-afternoon and it was the most expensive of the trip ($70) and also in a great location. I wouldn’t have chosen any of the hotels we’ve stayed at during the trip but it has opened my eyes to the joy of 3 star. On our last evening out as a group we went to the sky bar in the Bitexco building for drinks which is on the 52nd floor in Saigon’s tallest building.

The cycling tour officially finished on Saturday morning but 9 of us wanted to see the CuChi Tunnels so Doan arranged a private tour for us. Just outside Saigon are a network of underground tunnels used by the Viet Cong during the Vietnam war. It was a super tour and I got the chance to fire nine rounds with an AK47 managing to knock over two bottles about 100m away. A smashing experience. Then it was the cramped tunnels! This was the part that scared me the most as a self confessed claustrophobic wuss. 8 of us went in, 3 of us made 10m and took the exit, Dave made it another 20 or so metres but four of the guys who need a mention – Gemma, Nina, Jan and Oliver completed the whole tunnel which apparently only about 50 people per day manage (of the thousands that visit). I was more than happy with my 10m as I had a group of Germans coming up behind me and nobody likes that, not even at ground level. It was a very interesting place to visit and it was quite surreal to think that we were walking over the same ground that US soldiers had during the war. I’m going to have to watch all those Vietnam movies again.

Once back in the city I changed hotels to the Continental which was built in 1880 when the French were in charge and it still had a colonial feel to it. A long standing guest was Graham Greene who came up with the book The Quiet American during his stay in room 214.

I awoke on Sunday and once again I’m on my own as the last of my fellow cyclists had left for the airport. Most of them had night flights so we had time for some last minute bonding. Nurse Jackie said it might take me a few days getting used to the solitude but as I discovered yesterday afternoon completely by accident you understand, you’re never alone in the massage capital of Asia. More on that later.

My first stop was Notre Dame Cathedral which is based upon the Paris version. Plenty of activity including weddings and lots of kids celebrating graduation. Then I headed for the War Remnants Museum which was only one dollar admission which really sets the barrier in terms of expectation. I’d have been happy seeing a rusty old tank for one dollar but it was much better than that with planes, tanks, guns and a helicopter. It was interesting seeing an exhibition from the Vietnamese point of view but as they say, the winners write the history books. Now that there are only five communist countries left in the world, with the benefit of hindsight it does seem rather pointless. There were 13 at the start of the Vietnam War. Whilst walking I came across a man with a bamboo pole carrying two heavy baskets on each end with coconuts in them. I bought a coconut from him and asked if he would take a photo of me carrying the heavy pole. Well trying to teach a Vietnamese peasant the intricacies of modern photographic equipment turned out to be a challenge but we got there in the end.

The last stop on my sightseeing morning was the Reunification Palace. It’s big and imposing and a major landmark but I couldn’t make up my mind if it was attractive or a carbuncle. Built in the 1960’s it would have been attractive if it were a comprehensive school in Essex but as a palace in Saigon it almost felt like the least attractive girl at a Miss World pageant. The rooms inside weren’t much better. Still only a dollar to get in. Expectations met but not surpassed.

On the way back I needed to find a pool for some sunbathing as my hotel didn’t have a pool (small oversight on my part). I chose the Caravelle which was home to the press reporters for the three major American network in the Vietnam War. All very nice but I was rumbled by a pool attendant and had to pay the $26 guest fee but it did mean I could use all the facilities so I used ALL the facilities. Then I bought a Rolex, got a tattoo and had another massage (all in the name of research).

It turns out that the girls don’t get paid a salary. They live on tips which is why they solicit for more business. I turned Wing down for any “extras” but she was a good masseuse so I tipped her well anyway. The day before was a different story. I thought stroking the biffins bridge was all part of the $6 – bargain I thought. Both girls had perfected the mortified disappointment look after I turned them down. It’s like you’ve mowed down their entire family with an 18 wheeler.

I was still getting over the slight on the previous day from the shop assistant where I bought a polo shirt. She was wrapping up the “large” I’d selected but was looking at me curiously. She stopped suddenly and passed me an XL with a look that said “try it on”. I tried both and sadly she was right.

I’ve enjoyed Ho Chi Minh City enormously but I’d rank Phnom Penh as my favourite of the three big cities followed by Bangkok and then Saigon. All good and not much between them but the fact that the other two have tuk-tuks adding a level of vibrancy and an easy means to get about and of course PP has a casino pushes HCMC into third. The traffic in all three is awful. In Saigon mopeds drive on the pavements when the roads are full. Crossing the road is dangerous but everyone seems to avoid one another and I didn’t see any incidents of road rage. They seem to work things in the basis that the person with the best visibility is responsible so if I pull out on someone and can no longer see them, it is their responsibility to avoid me. Monday I fly back to Bangkok and I’m heading for a resort called Rayong for the next five days for what I’m referring to as a another research trip.

La Coruna Our first Spanish port was pretty much on the same longitude as Lisbon,…