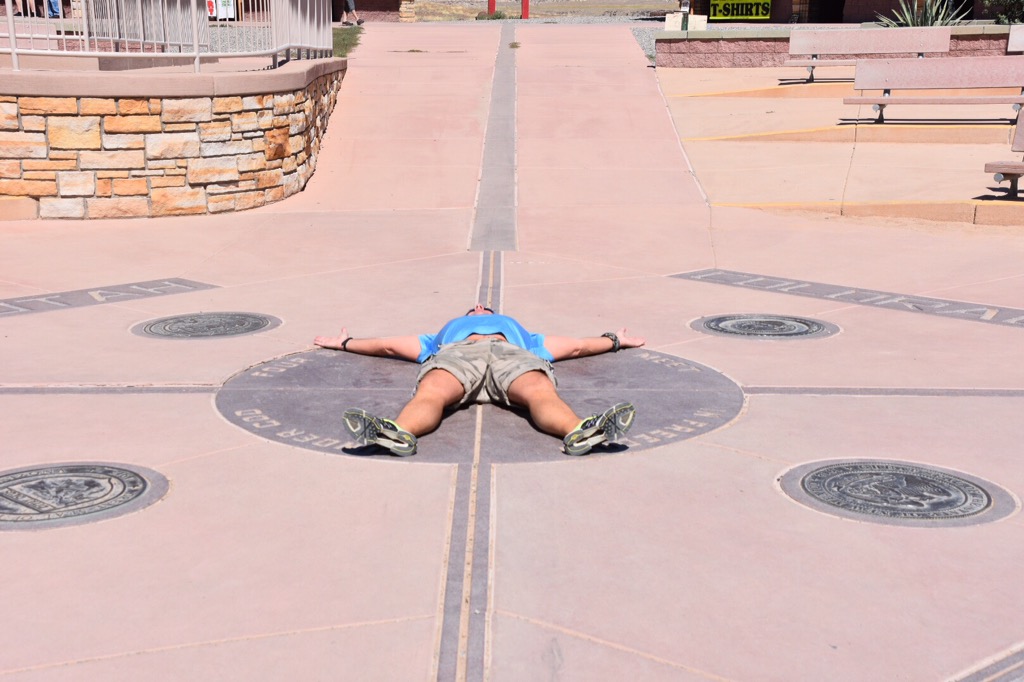 So after a night on an Indian reservation albeit in a plush hotel (not a wigwam) I’m heading to Bluff, Utah which promises to be one horse short of a one-horse town. I was looking forward to the nightlife. Perhaps a game of Parcheesi.

I realise that Ignacio to Bluff doesn’t sound much like an adventure but if I ignore the small caveman keno “chasing” session this morning, today was one of those special days that live on in the memory (Venice).

It was a cloudless morning and I drove first to old town Durango, which whilst a tourist trap is truly splendid. 300 days of sunshine per year; 19 inches of rain and 71 inches of snow. I only spent about an hour there but it’s on the return to list.

Then it was an hours drive to the four corners monument which is the only place where four US states converge – Utah, Arizona, New Mexico and Colorado. The land belongs to the Navajo nation and the monument is run by them. It’s low key and unpretentious to say the least. A gravel entrance road and car park, a few stalls selling Navajo guff and gifts and only five bucks entry. If the Americans ran it it would have an 1,000 space car park, a five star hotel, a golf course and perfectly manicured lawns. And it would cost $25 admission. I prefer the Navajo version.

After taking the obligatory photograph with a limb in each state, I was off again this time to Monument Valley. There’s an iconic image on highway 163 at mile marker 13 on the Utah side and I wanted a photo. Sadly, other people had the same idea but it wasn’t actually that crowded. As Georgia would say, “Dad, it’s a first-world problem”.

I knocked off two bucket list items today which is highly satisfactory. By 4pm I’d arrived at my home for the night and I’ve reached a new low in my lodging choices. But it doesn’t matter because the sun is going down and I’m dining alfresco at a steakhouse down the road (where the wifi password is johnwayne) and Bluff actually has two horses.