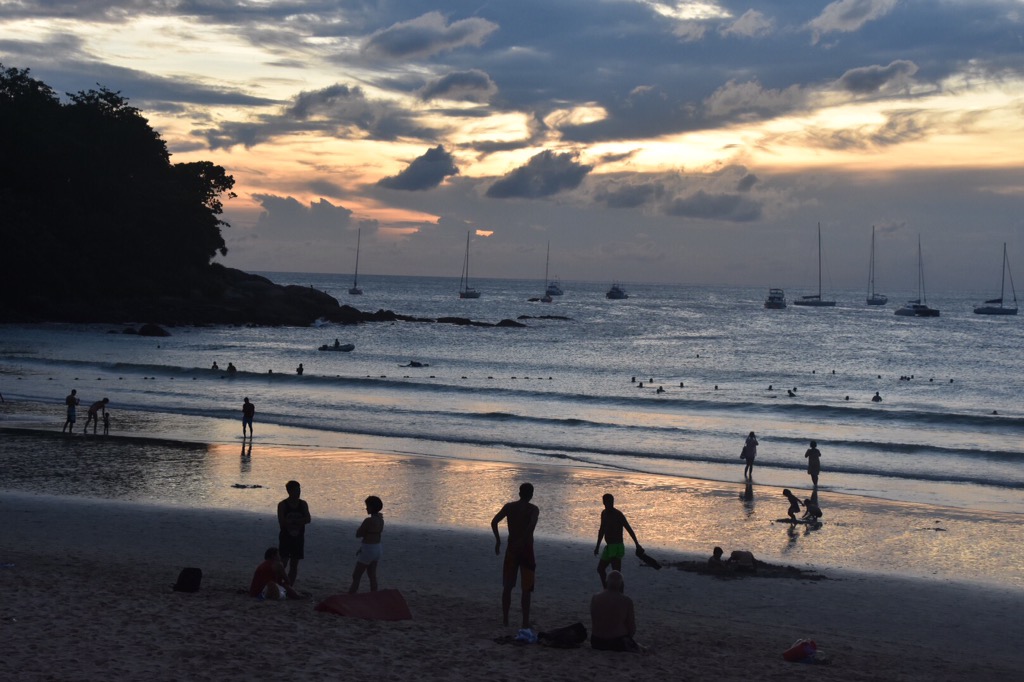 Phuket is just an hour by plane from Bangkok and is one of the biggest resorts in Thailand. Phuket is one of the 76 provinces and is actually an island (the largest in Thailand) lying in the Andaman Sea although looking at a map it looks rather attached to the rest of the country. It’s roughly 30 miles long by 13 miles wide.

On arrival it looked like we’d just avoided a downpour and thick cloud hung around all day. It didn’t stop everyone walking around in swimwear despite next to zero tanning possibilities. One of the first things that became apparent was the number of Russians (who rank highly on my least favourite tourists scale). I was beginning to think this might have been a mistake. I’ve got 16 nights here – 5 in Kata Beach and then 11 further up towards Patong.

On my first full day, after a two hour morning walk/sweat I decided that hiring a scooter might be a good idea. Perhaps not one of my better ones. I’d met Amy the night before and amongst other things, she rents mopeds. She set me up with everything and it soon became clear to her that I was either very rusty or a complete novice. I’d told her that the last time I rode one of these contraptions was three years ago but that was simply to soften the look of concern on her face. Anyway off I rode armed with a map, a quasi-sense of balance and a fetching black helmet. After nearly ploughing into a lorry at the first turn I decided that it wasn’t a race. My rationale was that it would be a quick learning curve and after twenty minutes I’d be an expert. On reflection I’d never actually been on a scooter. Jim recalls the last time I was on a motor bike – a rather tame 50cc jobbie that I ended up driving into the bushes. That was over 30 years ago and it effectively ended my dreams of winning the Isla of Man TT.

In my defence the roads in Phuket are fairly busy and quite hilly and Thai’s have a unique driving style. Well I puttered around for about an hour hoping that I could just keep turning left and I’d end up where I started but alas I had to do a few right turns and negotiate at least two roundabouts that were like Calcutta during rush hour, in order to deliver the bike back and say, thanks but no thanks. I’d hired it for 24 hours. I didn’t overtake anyone. Everything overtook me including a snail at one point. Amy was a little surprised to see me back so swiftly and possibly even more surprised that I didn’t have blood all over my t-shirt or even that I was still alive. The whole thing only cost me £4.65 so I wasn’t overly concerned. I needed a change of pace.

It was overcast again so I headed to the other side of the island to Phuket Town figuring it had to be fairly impressive as the main town on the island. I chose the fun bus to get there as it cost a pound versus 15 quid in a taxi. The fun bus had benches each side and a bench in the middle for the really unlucky. An hour and fifteen minutes later I was cursing my parsimoniousness. I walked round Phuket Town for an hour and it will be an hour I never get back again. It took no time at all to realise that this was not the place for a semi-sophisticated, middle-class chap with a penchant for finery like me.

Although fiscally appealing, I declined the fun bus on the way back and I found a taxi driver called Jinda who was 68 and delightful. Got back in half the time and it was time for a massage. I’d promised Nita the night before that I’d return and I did. Nothing like being smothered in coconut oil.

Saturday was another overcast day that turned into rain. The weather here has been rather shit. I went for my two hour constitutional before it got too warm. It’s a nice place to walk around but the pavements/sidewalks leave a lot to be desired. They’re all uneven, ill fitting or crumbling. After some more exploring I watched a movie on the laptop – The Wrestler with Mickey Rourke. Possibly the most pointless film I’ve seen in a long while.

I went back to see Nita for round two but she was busy so I had to have Ping who was not as good a masseuse but had redeeming features. I found a bar that was playing Chelsea vs. Newcastle and good music so I bought wine and lingered. I think it was the most happening bar in this part of Phuket.

Sunday was a 37,000 step day. It’s been fairly low key here with most of my efforts trying to lose a few pounds after the cruise.

One of the more amusing sites in Thailand is the traffic policeman armed with a whistle. They use it with absolute authority blowing a series of short bursts thinking that the traffic they are directing has any idea what they mean. I’ve never witnessed such earnest enthusiasm. You may recall the you.tube clip of Sgt Somchai in Pattaya I mentioned last year. Have a look if you didn’t see it.

On a cruise ship one would pay about $150 for a massage. You’re a captive market so they can charge what they want. Here it costs as little as $9.41. The girls (and a few chaps) work 14 a hour day and probably only get a few punters each. They certainly never earn enough to give them any sort of financial security or independence so they’re always reliant on their employer. One thing they do have, and cling onto, is the camaraderie with each other. But they will never escape the cycle unless they hook up with a westerner. And once they’re too old, that’s it although I’m not sure what too old is here as they can age quite well. The ladies offering massages on the beach are generally of an older persuasion.

As for the Russians the young ones are sylphlike and the older versions are cabbage monsters. I’ve not witnessed anything even resembling politeness from a Ruskie since arriving. I’m in favour of a return to communism when they all stayed home. In case you think I’m becoming xenophobic the Thais also dislike the Russians: they consider them rude. The Russians nab the sunbeds before sunrise, I’m not kidding. For half these people the family car is a tractor.

Having done a modicum of research it would appear that Egypt, Turkey and Thailand are three popular destinations for Russians because they’re quite affordable to the average working-class Russian or peasant as they’re more usually referred to. Of course every cloud has a silver lining and the benefit of being at a Resort with 90% Russians is that I can wear my speedos with impunity. I just get lost in the speedo-fest that is Moscow-on-Sea.

My favourite restaurant is the Country Restaurant which does all the beige food I’m so keen on and also plays Country music. It’s a bit incongruous but I’m dealing with it manfully. Tomorrow I head north about 10km to a new hotel and a change of scene. Hopefully fewer Russians.