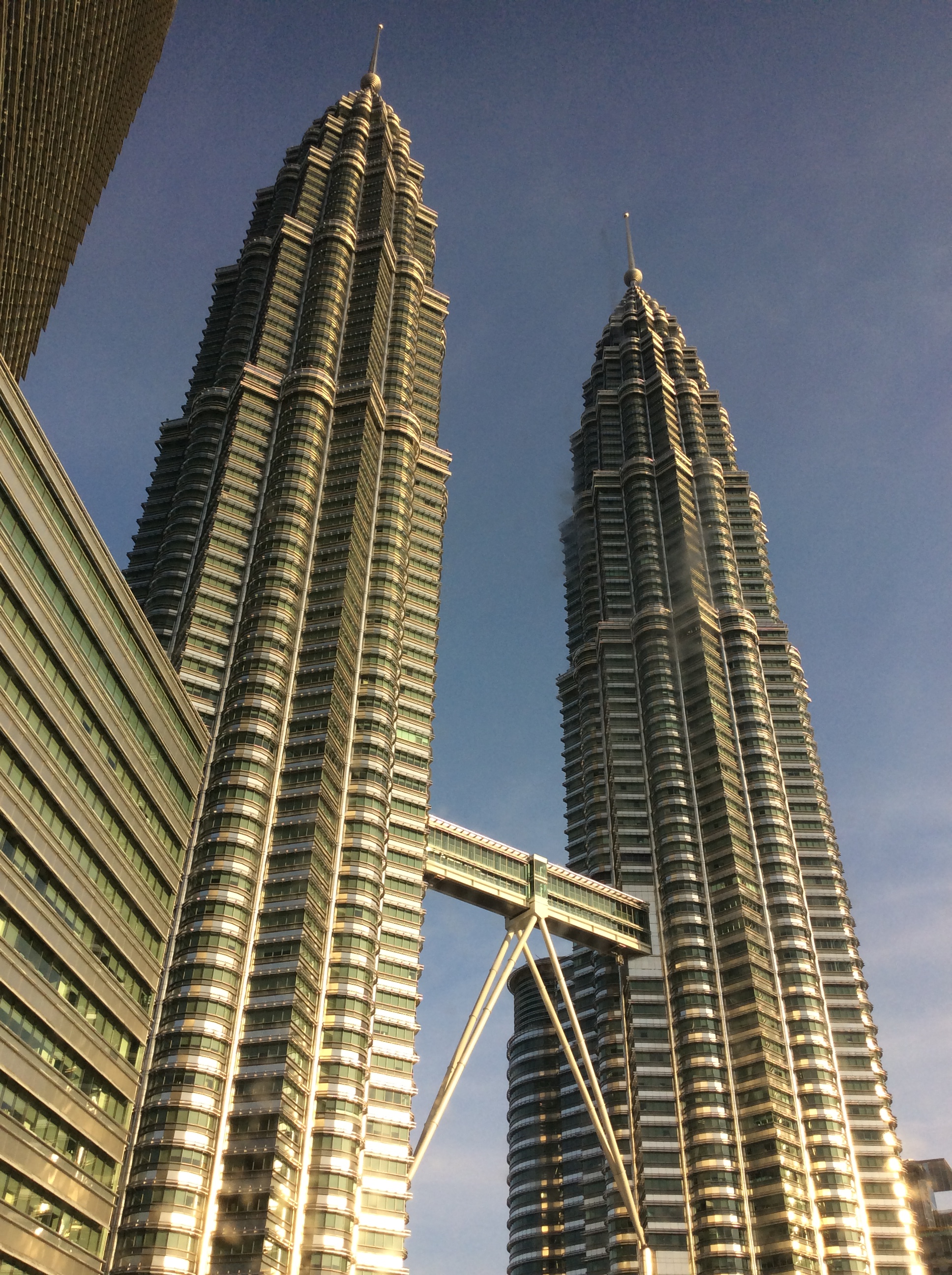 Wow! What a place. Staying at the Mandarin Oriental and my room overlooks the Petronas Towers – well I say overlooks but in reality it’s the other way round. The staff here are fabulous and they all call me Mr Patrick. Sometimes a little too attentive as I don’t need to be asked half a dozen times if my avocado salad is ok although when I claimed it was more like avocado surprise I was delivered a whole avocado. It’s relatively cheap at just over £100 per night which compared to Singapore is a snip for a 5 star hotel. The infinity pool on the third floor has a terrific view of the skyline and I’ve been reliably informed its 27.5 metres long, that good old standard pool length.

I was chatting with a waitress called Jackie from the Philippines in the bar downstairs and as you can imagine life is very different in the Far East especially if you come from an overpopulated and poor country. She’s 32 and been working in KL for 6 years. Her 8 year old son lives back in Manila with the grandparents and she sends home money every month. This is a similar story around the region. People go where the work is and leave children behind. She gets home every two years so not a very good holiday allowance. Here she lives in a condo with four bedrooms and shares with three other girls in bunk beds so about 16 girls in the condo (which could be the name of a country and western song). Her monthly wage is 1300 ringgit which is about £215 and she sends 1000 back to Manila. Rent is free but her “agent” as she calls him must have a deal to supply cheap labour to hotels and provides housing out of the profits. She gets two days off a week and a working day is 9 hours.

It’s odd being in such a luxury hotel with staff being paid such meagre amounts. No wonder so many of them latch on to middle aged men in the hope for a better life in the west although you’re not taking on the woman, you’re taking on the whole family (sometimes the village).

Malaysia only has 30m people which compared to Indonesia (250m) and the Philippines (100m) is relatively small. I’m starting to get the idea that the bigger the population, the poorer the country unless of course it has an abundance of natural resources (call me Sherlock). With no welfare to speak of they have lots of children to look after them in old age but the plan backfires because there’s not enough work.

So the Shard, one of the tallest buildings in Europe is 309 metres. The Petronas Towers are 452m so almost 50% higher although the Burj Kalifa in Dubai is 828m.

The Petronas experience was good although it’s becoming more of a tick in the box rather than a WOW. Once you’ve been up a few skyscrapers the various views all merge into one. Petronas is a large Malaysian oil company and they occupy all of one tower and half of the other (I didn’t ask which half).

After that I visited the aquarium which normally I would pass on but I thought they might have some different species of fish and it didn’t disappoint. The brown banded bamboo shark, the elephant nose fish and the chambered nautilus to name but three.

Then it was the hop on hop off bus known as the “hoho” but for me it was more like the “hono” as I nodded off which is no mean feat on a plastic seat with no window, no headrest and a bunch of excited schoolgirls giggling away.

I’ve only seen one Muslim girl dressed in a full burqa with just the eyes showing. I say girl but it could have been Bernie Ecclestone for all I know. Her man friend was in shorts and a t-shirt. I guess the full burqa is a perfect disguise for a woman to cheat on her partner and step out with another man. “Fatima, was that you I saw this morning with Abdul? No I was at home looking through my holiday photos. I think I look good in this one”.
Taxis are cheap. £1 for the first km then 30p for each additional km and petrol is about a third of the price. My driver this morning pictured below is one the only female taxi drivers in KL but I’ve never been driven so fast in my life. She missed her calling as a racing driver however as she resembled a distant relative of oddjob this may have been a deterring factor – those cockpits are small.

This morning is beautiful sunshine and I’m on a five hour coach ride to Penang and once again I’m the only westerner/caucasion on the bus but curiously the announcements are all in English. Well, I say English but it’s not a variety of English I recognise. Two seats at the front all to myself the other day but this one is full and I’m next to an older lady who snores like a warthog.

Next stop from Penang