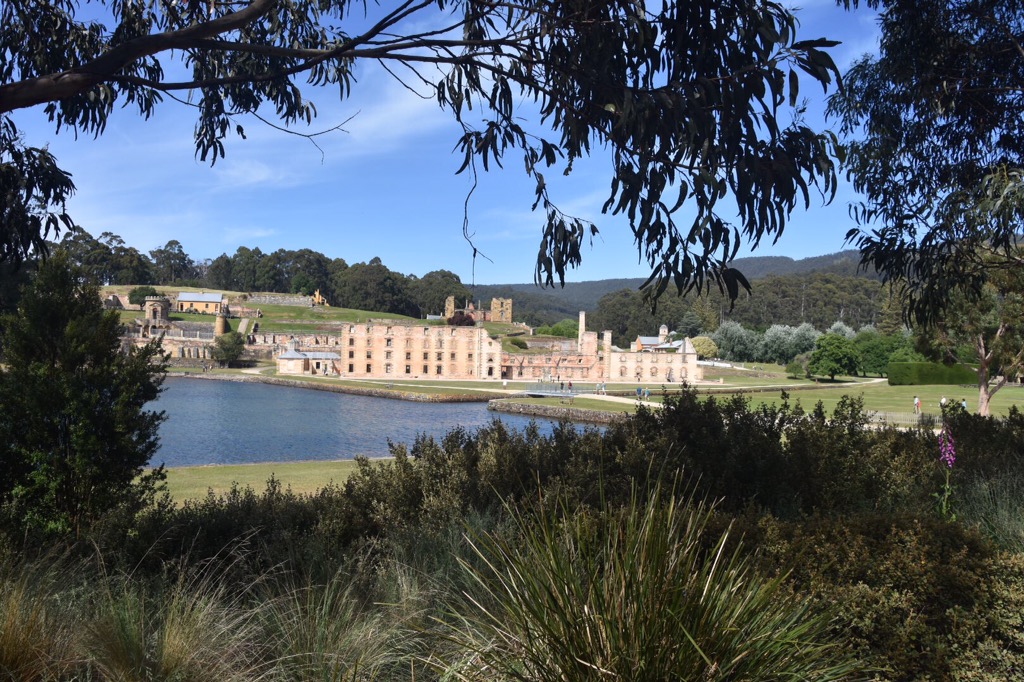 Our final port call on this trip was Port Arthur and what a lovely place it was. Just a little further round the coast from Hobart is one of Australia’s eleven World Heritage Sites. Not for the first time, the historical significance of Port Arthur centres around its function as a penal station, in particular a secondary punishment station which housed repeat offenders from the other penitentiaries around Australia. Just to put things into perspective, the initial deportation of criminals to Australia was primarily because of overcrowding in British prisons and back in the day you could be banged up for some rather petty offences such as stealing a loaf of bread.

The three of us had bought a tour for $80 each and the thing about any of these port stops is that you don’t know the lay of the land before you get off and sometimes you think you’ll be better off with a tour rather than freestyle. Well here, freestyle would have been fine and our tour was a little painful as 25 of us were given the 2.5 hour tour. It was the equivalent of the long version of a dull story. The level of detail was overkill. I’d like to say I’ve learnt my lesson about these types of tours but clearly I haven’t. Anyway it was a beautiful place to stroll around and with sunny skies and a warm temperature I really didn’t have to much to complain about.

We were back on board early as the ship was due to sail at 3pm for our 600 mile journey back to Sydney. It was the final gala night (black tie) and one last outing for the Union Jack waistcoat and tie. After dinner with the gang I was a winner in the casino before retiring. The casino has been kind to me on this trip although they haven’t bought me one drink. T’will be noted.

The final sea day was a little emotional for some as we’d been together for so long. The passage was calm and I couldn’t resist an afternoon flutter at the three card poker table where I was victorious. The winning streak continued into the evening and I cashed in my chips with the best result yet on a cruise ship (the least I’ve lost). The gang and I, drunk as sailors, enjoyed one last hurrah in the piano bar and had a thoroughly fabulous time.

A little about the gang.

Gwen (79) who has been on since San Dieg, grew up in Des Moines and went to the same school as Bill Bryson. Her younger sister actually knows him. She now lives in Kansas and has been my substitute mother at times with a forgiving nature and sagely advice. She was staying on the ship for a total of 99 days.

Ben (first cruise, 45) has been my partner in crime and it’s been a hoot knocking around with him. He now lives in Australia but has dual nationality with the US and spent 30 years there from 13 to 43. His father was English and I guess the most significant event in Ben’s life was when his father came out as gay when Ben was just 11. His dad sounded like a character. He briefly managed David Bowie and went on tour with the Beatles but his big success was managing the New Seekers. Ben is also a big character and he’s known all over the boat, especially in the piano bar where I suspect he’s Barry’s favourite. Great fun.

Richard (70) had 22 years in the army and at 6’7″ 7/8 was just within the height limit. Any taller and they don’t have clothing and equipment to fit. He won a basketball scholarship to university in Ohio where he is from. Now home is Mobile Alabama and he is a big fan of their college football team. In fact all of his clothing is branded – from underwear to formal shirts. He requests Sweet Home Alabama every night at the piano bar. He could still dunk (and I don’t mean digestives) until he was 42. Richard can be painfully embarrassing and has a “broken record” predictably to him but lots of fun. He cruises without his wife now and I think he prefers it that way. After retiring from the army he became a teacher in an inner city school where they were looking for male for role models from the military. He did that for 20 years and it meant wearing his army uniform. He retired as a Lieutenant Colonel.

Astrid (43) is German and similar to Ben is between jobs. Although she was on the ship from San Diego, I only saw her a few times before Sydney and we didn’t speak until we’d been sailing for three weeks and she wanted to know what I was doing with my camera. “Time lapse photography of course”. Well, I’m glad we’re speaking now. We’ve spent a lot of time together and together with Ben have ventured out most days as a trio.

It was a great cruise but I have to say I’m happy to be getting off. I’ve met some lovely people and collected a few more friends.

Cambodia – the land of inexpensive laundry

Having to leave the US every 90 days is proving to be a real chore.…