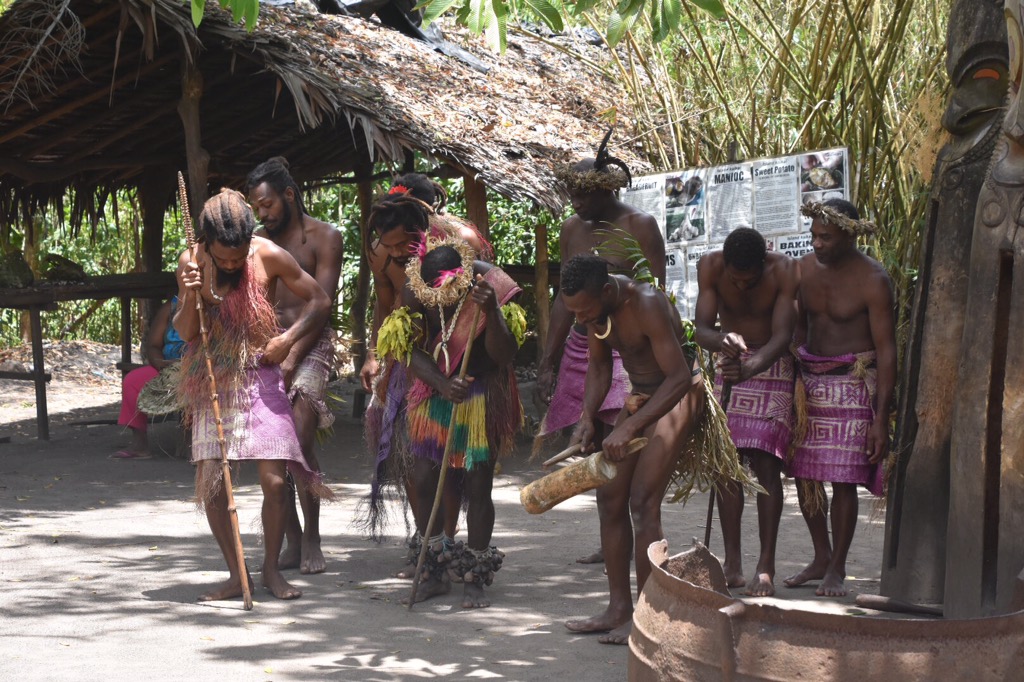 Vanuatu is an archipelago of 83 islands in the South Pacific with a total population of 281,000. We stopped at the capital, Port Vila on the island of Efate. In 2007 Vanuatu was voted as the happiest place to live. Local status is decided by number of pigs you have and women look after pigs while men look after the children. Until 1980 the islands were an Anglo-French condominium called the New Hebrides and even though Vanuatu is now a country in its own right, the national split continues with some schools teaching in French and others in English.

Six of us picked up a cab after talking to Barry the taxi coordinator. In hindsight I should have asked to see the vehicle and vet the driver. We got toothless Joe who’d gone to a French speaking school and had a minibus worth about $100. It was a right state. Never seen anything quite like it so as others drove off in shiny Toyotas, we pulled out of the port in a Hyundai Chit-Heap. I sat in the front and Joe had to manhandle the door open for me every time we stopped as I couldn’t open it from the inside.

Joe tried his best to make conversation with me pointing out the various highlights along the way. A school, a football field, a church. The Secret Gardens in Mele turned out to be quite interesting with men in loin cloths and penis sheaths dancing around. The exhibit about cannibalism was particularly noteworthy and the last recorded incident was with the Big Nambas in 1969.

The main event of the day was Hideaway Island a short ferry ride away which has the world’s only underwater post office. Yes, one of the dumbest ideas you’ve ever heard. It’s basically a gimmick and people can buy waterproof postcards, swim out about 100m and dive down to the post box. Lots of people did it!

Back at the port we had to navigate our way through an Ikea style arrangement of vendors selling tut whereby we passed every single stall. Very clever. I bought a tea towel for my burgeoning collection.

Vanuatu is home to the Pacific Mini Games in December where 2000 athletes representing 24 nations will compete over 14 sports. As well as some of the smallest nations on the planet taking part, Australia are also included which seems a little unfair.

It won’t surprise anyone to learn that the Chinese are investing In various infrastructure projects on the island. I’m tellin’ ya…

A goodly day and a box ticked. Vanuatu reminded me very much of the Caribbean – landscape, people, potholes. The people are black with little of no Polynesian influence unlike our other Pacific stops. Nation number 62.

Another of the ships passengers worth mentioning is Katarina. She’s just turned 11 and is the second youngest person on board. Travelling with her parents who just sold a motel business in Napa Valley, she is home schooled and is without doubt one of the most amazing 11 year olds I’ve ever met. She joins us for trivia most days and during the Abba music trivia event a few weeks ago, she could have won on her own. She knows everyone on the ship and seems to like the company of older people. Not much of a choice there. Her favourite film is Roberta!