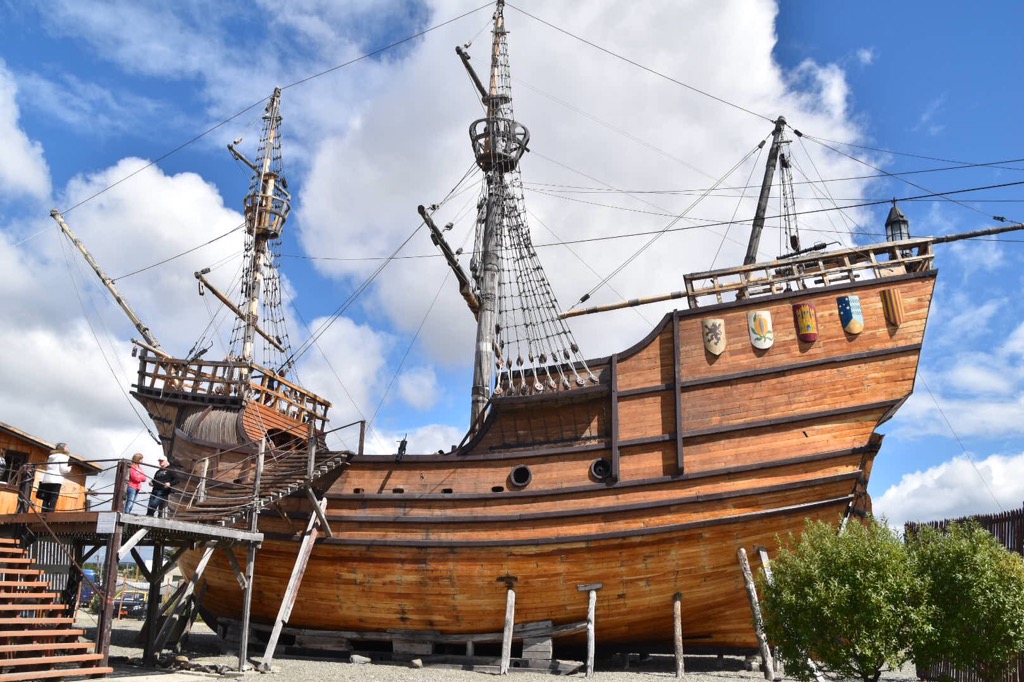 I’m really enjoying ship life, constantly on the move travelling to new and exciting places. When I’m at home I spot things – a crack in the ceiling, a weed or two (usually more) on the patio, something that needs painting or fixing or changing or moving – you get the idea. On the ship I don’t think of those things at all. I grant you, it’s an expensive way of distracting myself but I do get to visit places, meet lots of people and tick boxes. We’ve been sailing for almost four weeks now so 6 more weeks to go and I know it will fly by.

We had two days at sea before arriving in our last Chilean port of Punta Arenas and we spent the time navigating our way through the Darwin Channel and then the Chilean fjords. The scenery was similar to Norway only with fewer waterfalls. On the second morning we passed by the Brujo Glacier which was quite something to see. We sailed slowly due to large pieces of ice that had broken away from the glacier but not melted yet. The ship had to reduce its speed to under 5 knots so as not to cause damage if we hit one. We’ve all seen the movie.

Sea days are often welcome after a port day and I attended a lecture called “The Importance of Latitude” and it was the best ship lecture I’ve been to. It doesn’t sound very exciting but it was a fabulous geography lesson. New learning: over the course of a year, everywhere in the world has about the same amount of daylight. If you already knew this then just be thankful that I’ve finally cottoned on. Also Sheryl and I took a second tango class and I was rather disappointed that the teachers were from Colombia and not Argentina, home of the tango. Not disappointed enough to let it spoil my whole cruise but certainly a let down. Like being taught how to make pizza by a Frenchman or how to toss a caber by a Welshman. Anyway I got over it.

We entered the Strait of Magellan in the early evening of the second day and the sharp left turn into the channel caused some nervous moments as we rolled one way and then the other. At the time we were sitting in the dining room and we heard some dishes go crashing in the kitchen. Things stabilised quickly though.

Punta Arenas, which means Sandy Point in English, is a city in southern Chile located on the Strait of Magellan in Chilean Patagonia. At one end of the Strait is the Pacific and the other the Atlantic. It’s 53 degrees south so the northern hemisphere equivalent in the U.K. is Birmingham but at 14C I dare say a lot cooler than Brum bearing in mind it’s the summer down here. It started getting light at 5am this morning and it’s still light at 10pm.

We were one of four cruise ships visiting Punta Arenas and they had another 5 the following day. I went touring with the gang and we strolled around the sights. At the main square we visited a church and Anthony decided to go to confession. He’s a good catholic boy. The only problem was that Anthony didn’t speak Spanish and the priest didn’t understand English. He could have confessed anything. Rather bizarrely the municipal cemetery is the number one tourist attraction in Punta Arenas. It was impressive and unusual but the highlight for me was the outdoor Nao Victoria museum which has a life size replica of the first ship to successfully sail around the world. The voyage was led by Ferdinand Magellan who set sail on August 10th 1519 and consisted of five ships and 265 men. Only the Victoria and 18 men returned on September 6th 1522. Magellan didn’t even make it after being killed in the Philippines. The ship measured only 69 ft and to be honest I would have been sceptical about its ability to cross the English Channel let alone circumnavigating the globe.

A second boat at the museum was the James Caird one of Shackleton’s lifeboats used in the most remarkable maritime rescue mission ever. As some of you know Ernie was Katy’s hero and he saved ALL 28 crew members from the ill-fated Endeavour expedition. It took four attempts to rescue the remaining 22 from Elephant Island.

The third boat was The Beagle which was the ship that carried Charles Darwin for his the Galápagos Islands discoveries. At 90 ft it was a fair bit bigger than Magellan’s boat and cost £7,803 to construct which in 1820 was a lot of money. The Beagle’s first Captain was Pringle Stokes who shot himself. I like the idea of his mother looking at him after birth and saying to her husband “I think he looks like a Pringle”. Darwin was on the Beagle’s second voyage as a naturalist and travelling companion to Captain Robert Fitzroy. Up until that point Darwin hadn’t amounted to much and was a failing medical scholar. Then things changed after visiting the Galápagos Islands. Of The Origin of Species wasn’t published until 1859 despite the voyage to the Galapagos occurring during a five year expedition from 1831 to 1836 so it took another 23 years after returning for his most famous work to be published.

The signature tour from the ship in Punta Arenas was the Antarctica Landing which was $3,500 and as the name suggests included four hours on Antarctica after a two and a half hour flight. Those going – about 50 including a handful of crew members (who obviously paid a lot less) had to have their belongings decontaminated the day before. They also had to have the correct clothing including hiking boots and waterproofs. Anyway, the trip was cancelled because of the weather. Apparently this happens the vast majority of times. Some of my blackjack friends were due to go and they were not happy at all after being diverted to another tour which none of them would have signed up for. Landing on Antarctica is the main reason for some people taking the cruise so I can understand their frustration.

After Punta Arenas we had another sea day or “scenic cruising” as it was billed. At 8am we arrived at an area known as glacier alley on the island of Tierra Del Fuego on our port side in the Beagle Channel. Whilst the waters were calm, the wind at times was some of the fiercest I’ve encountered and up on the top deck we were all leaning into the gusts with our clothing flapping wildly. It’s not easy to guess wind speed but I would estimate gusts of up to 50-60 mph. It certainly hit wobbly face speed. The glaciers were stunning; one in particular had a huge waterfall gushing from underneath it. Visibility was good but there were too many clouds and not enough blue sky to create the right contrast for fabulous photography. Everything seems to look better when the sky is blue.

By late afternoon we had reached Cabo de Hornos or Cape Horn as we know it, the southernmost island of the Diego Ramirez island group and most southerly point of South America. We anchored about 400m offshore while a boat, loaded with all our passports was lowered into the water. It made its way to land which looks as bleak as anything I’ve seen where I guess there’s a guy sitting in a hut with a desk and a stamp and for an hour or so he is going to stamp passports. This might be one of the crappiest jobs in the world. After restarting the engines we sailed round Cape Horn and the Captain sounded his horn as we crossed from the Pacific Ocean to the Atlantic Ocean.