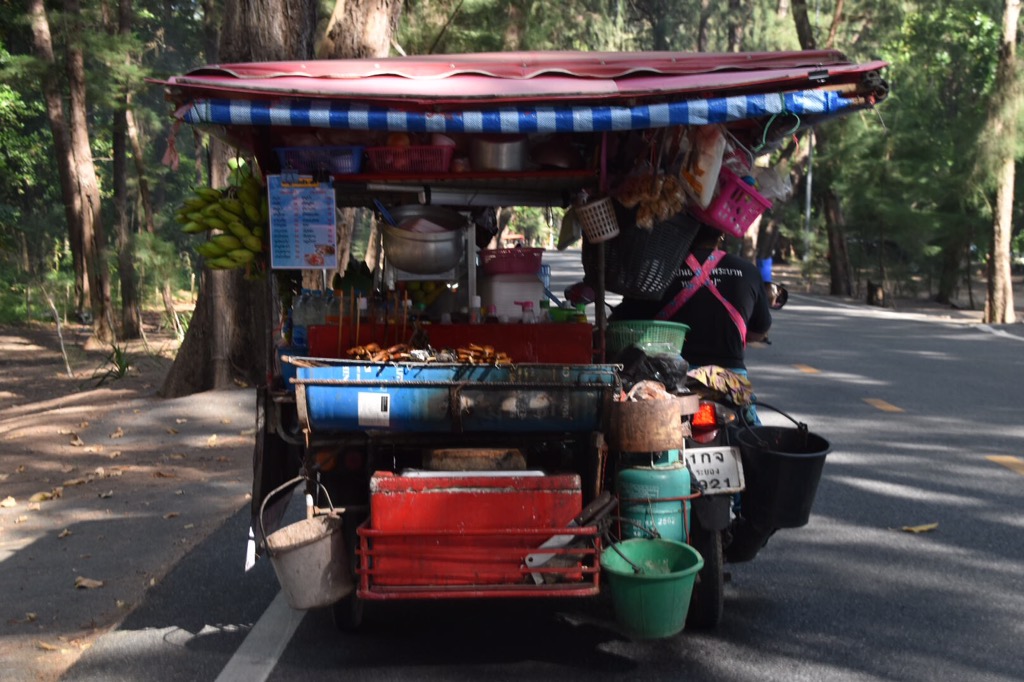 After flying back to BKK I jumped in to a taxi and headed for the province of Rayong which is south of Pattaya, and very lovely and chilled indeed. The flight was two thirds empty and only took 70 minutes. Five nights here at the Novotel then up to Pattaya for the last seven nights. Include me in your prayers.

Now I’ve been in many a taxi and they all have varying degrees of personal stuff in them otherwise known as “tut” but this guy had half his wardrobe in the boot. My bag had to go on the back seat so I won the lottery and had to sit next to Gollum’s slightly better looking brother in the front. The front doors had four speakers each and his car stereo/TV had a remote control. In the back were disco lights and to add to his array of electronic equipment he also had a weird siren for getting the attention of ladies. He had half a dozen USB zip drives with his music which he eventually played after we listened to an hour an a half of static. The journey to Rayong was three hours mostly on a motorway and he had this peculiar way of driving where he would floor it for a while and then slow down like he was trying to annoy someone behind him. I questioned him on this a number of times and asked if he could pick a steady speed and stick to it which he would do for a while before becoming annoying again. Then he stopped on the hard shoulder and bought some roadkill which he stuck in the boot. I tried to have a nap but he decided to chew some sweets noisily. In fact during the journey he ate a variety of things he had secreted around his car. The journey didn’t feel overly dangerous unless I include the lane meandering. I did offer to drive at one point. He had everything in his utility car. Two boxes of tissues on the dashboard in front of me. One clearly wasn’t enough. The sun visor was hiding a stockpile of straws and the rear view mirror had a plethora of Buddhist objects hanging from it. I couldn’t actually see out of the passenger window as he had so much guff stuck to the glass. I knew I shouldn’t have got in his car.

During my few days in Rayong province I watched some glorious sunsets and sunrises. The beach faced directly South so we were treated to both which is a rare bonus. I really liked the Novotel Rim Pae in Rayong. The perfect place to relax for a few days despite a proliferation of French and Chinese guests. In fact I didn’t hear one English voice in four days.

On the first day I managed to drop a bottle of aftershave on the floor which smashed into a number of small pieces. It has of course meant that every time I return to the room I’m overcome by the fumes of a whole bottle of Antaeus Pour Homme. What the maid must think. Smells like a poofs boudoir. She keeps leaving the aircon on full blast.

Thai people are still mourning the death of King Bhumibol who reigned for 70 years which makes him the only king most Thai people have ever known. He was never meant to be king but when his older brother (the former king) was found shot at the age of 20 he became king aged 18. He was seen as a unifying force and as a result he achieved an almost godlike status – the official period of mourning is one year with people wearing black as a mark of respect. His son is less popular and at 64 he’s been a playboy for most of his life and spent a great deal of time outside of Thailand. One of the more curious things the new king did was to promote his poodle Foo Foo to a high rank in the Thai Air Force. Criticism of the royal family carries a jail term of 15 years so no one said anything at the time. He’s was crowned a few days ago.

During my time here I’ve been mostly lying in the sun however I did go on an excursion to a nearby island called Ko Samed which is a lovely little island with some great beaches. I hired a golf cart and drove round the whole island in two hours. I got a speedboat there and back and then to get back to the hotel I found a husband and wife tuk-tuk driving team. Most peculiar but it worked out well as she clung on to him. She was very effective ballast.

I was surprised a few times By some ladyboys working at the hotel who dress as men but wear make-up and are clearly as gay as a day in May. They’re often referred to as the third gender in but despite their worldwide notoriety, acceptance is not universal in their home country and can be seen as an embarrassment and disappointment especially to their fathers.

On my last day in Rayong I walked down the beach and found a rickety old shack with three women of indeterminable age offering massages on grubby old mattresses. Perfect I thought and by the end I swear I had all six hands on me. The weather had turned so I left Rayong a day early and headed for Pattaya which has more to do if the sun isn’t shining. In fact for most people who visit I’m sure the sun is the last thing on their minds. Our father, who art in heaven…