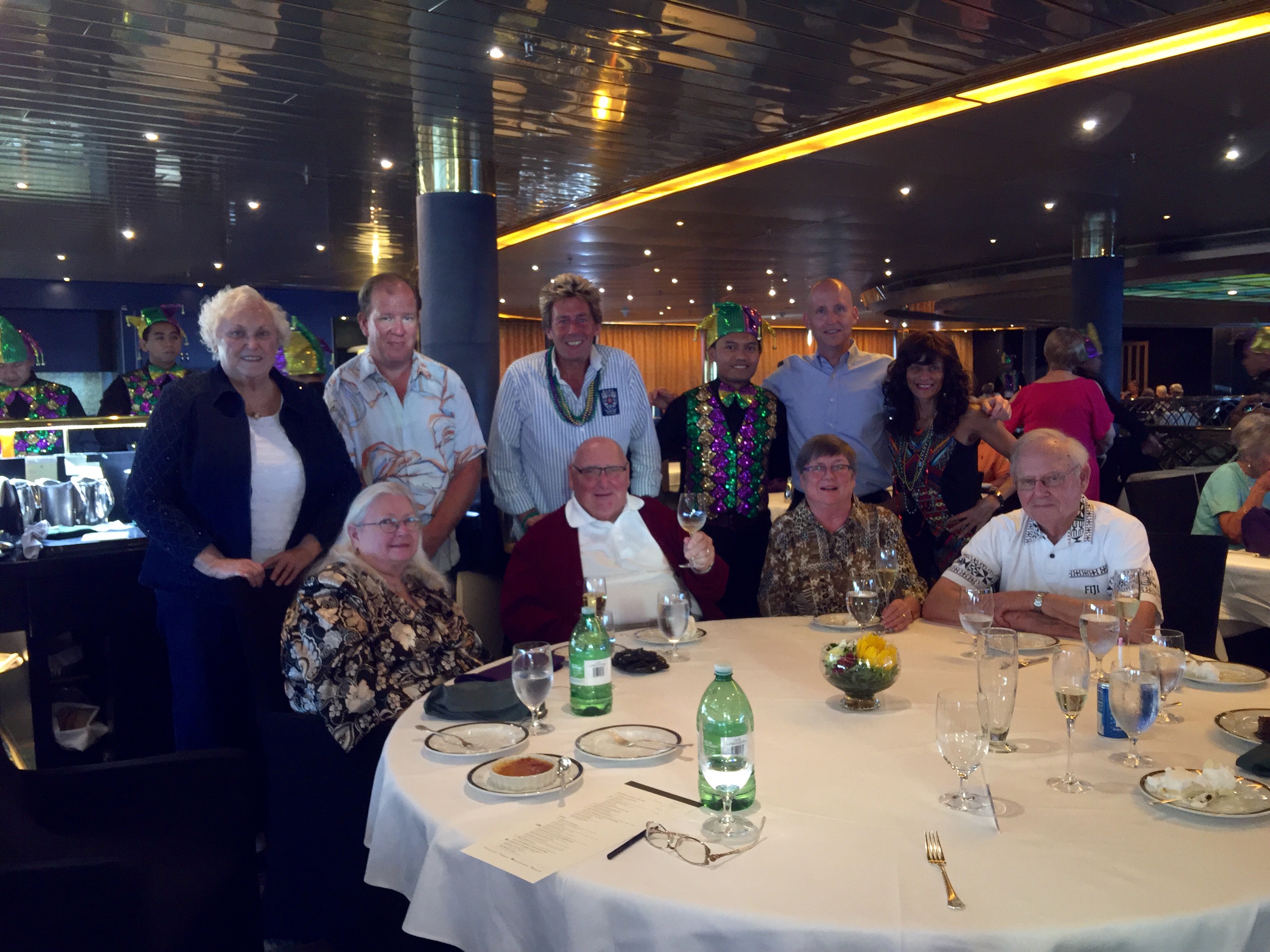 We had four days at sea between the Cook Islands and our first of three stops in New Zealand.

Some of the ship characters

Tanned Jeff lives on the ship for 7 months of the year and this is his 15th world cruise. Home is Virginia Beach when he’s not cruising. He blogs and has 1.8m followers if that’s what they are called. Mostly takes photos and talks about the weather!

Dolly is 92 and not the oldest onboard but certainly one of the more colourful characters. She lives onboard for 10 months of the year and the other two months she imposes on a friend in Florida.

Bob is a 75 year old from Boston. In the summer of 1963 he and Jimmy, Joe and Tony and four girls spent some time on Lake Ontario and there was much cross fertilisation. Three years ago one of the girls contacted him to tell him that he had a 50 year old daughter and two grandchildren. The girl, let’s call her Lucy had put the baby up for adoption as she didn’t think she could handle motherhood at that time. When Bob went to visit his daughter for the first time she lived in a multi million dollar house with a Ferrari on the driveway. She works in New York and has a good job in insurance. He now has a great relationship with her and is grandad to her kids. It was the nicest story I’ve heard since boarding.

Welsh Dave from tennis is 71 and the former trampolining champion of Britain. Now I think he’d go straight through the netting but in his day he was also the Scottish badminton doubles champion, played rugby for Middlesex and tiddlywinks for the navy or was it high board diving? I forget. He’s lived in Florida for 30 years after a career in the Royal Navy and marks and spencer.

Karla has been trying in vain to teach me the two step, the rumba, the foxtrot etc. but I’m sticking firmly to the freestyle circular foot shuffle. There are six gentlemen dancers onboard who I think get a reduced fare but have to be available everyday from 4:30 until midnight to dance with both single ladies and casino widows. A nice bunch of guys the youngest of whom must be 65 and the oldest about 104. Chinese Mark is the most elegant whilst Freddie is only one rung above the foot shuffle.

Our dining table is for 10 people although we only have 9 most evenings. Bruce and Cindy are in their early 80’s and a lovely couple. They still like each other and when Bruce is being amusing which is often, Cindy just looks at him adoringly. It’s very sweet.  Ellen and Russ both have walking frames and must be in their 70’s – Russ is husband number 4. He won’t let her cook.  Husband number 2 was much older and had a large data processing company so Ellen is wealthy with the money in trust. Two cheques a year. She’s in a suite and never misses an opportunity to tell us how important she is. The table bragger although she doesn’t look moneyed in any way. Linda who could be Dame Edna’s sister is 73 which she announced proudly one night possibly expecting me to say “oh you look much younger” but in truth she doesn’t so I was floored. Could easily pass for 82. She is with her adopted handicapped son Guy who is 44 and a sweet chap. Steve is 49 and travelling alone. I get the feeling he’s retired but I need to delve a little more. Karla (55) is from Miami and looks 45 and then me the only Brit on the table. Karla and I sometimes recruit a tenth person for a guest appearance. They’re a great bunch to dine with and the conversation flows well so long as we can keep Ellen quiet. The other night we had a rip roaring time probably because Ellen was so tired she was falling asleep in her broccoli. She is also the first Donald Trump supporter I’ve met but she’s such a staunch republican I think she’d vote for Donald Duck if he was standing.

Our waiter is Yitno from the Philippines whose voice is the acoustic version of a dead ringer for Peter Lorre’s character Ugarte in Casablanca. He wants my tea stained Union Jack waistcoat however it’s several sizes too big for him.

The other day it was Wednesday and then it turned into Friday so Thursday had gone missing. Normally this is as a result of too much vino collapso but in this instance it was crossing the international dateline. I hope I get a refund for the missed day. Anyway I’m not all that partial to Thursday’s so missing the odd one is fine by me. A strange thought: 7 billion people in the world nearly all of whom experienced Thursday somewhere.  And a few thousand people either missed out completely or had two. Also there should be about 4 people on board who missed their birthday. I was about 12 hours behind you but now I’m 12 hours ahead which is a little confusing.

Every day they change the rugs in the elevators with the day of the week printed on them because it’s very easy to forget what day of the week it actually is. I’m waiting for them to install the “who cares” rugs.

When I walk into the casino I can almost see the dollar signs in their eyes. I think there may be a profits warning when I get off in Sydney. I’m up on the tables after some reckless all or nothing moments but Da Vinci Diamonds and Wolf Run are definitely getting the better of me.

The other evening the singers and dancers of the MS Amsterdam did a made in England show featuring the music of Elton John. We overheard a few of the older guests at lunch saying “have you heard of this Elton John guy” and the other one replied “I think he’s a singer”. The show was a train wreck as none of them had strong enough voices with “Kiss The Bride” the most painful of them all. Bring back the Uruguayan Harpoonist, all is forgiven. Chatting to Michael at the blackjack table, he saw Elton John in Memphis in the early 1970’s when Elton was in his twenties.

The author Paul Theroux is on the ship and he did a Q&A session which was absolutely fascinating. Louis Theroux’s father. He was asked where he would live if he had to choose one place and could no longer travel. His long-winded answer finally got him to say Hawaii (and Cape Cod) where he currently divides his time. But he said that one of the big factors was finding love and having a companion. Well that set me off good and proper.

He lives on Oahu (home to Honolulu) and lives on the north shore famous for surfing. Yesterday there were 45ft waves there and 13 surfers needed rescuing.

Then Karla asked a question from somewhere in the audience (didn’t know she was in the theatre) about solo women travellers and the difficulties they face. His answer was insightful about the need to blend in depending on where you are. In Mexico wear a had. In Argentina grow a moustache (not so easy for some women). He said that at his age he is invisible which he thought was a great advantage.

He did a book signing at lunchtime and the queue was enormous. We’d all been given a copy of his  Pacific island travel book. Later in the afternoon I ran into him in the sauna and we had a nice private chat about all sorts of stuff including Louis who is apparently working on another Jimmy Saville documentary.

The other night Karla dragged me up to the late night dancing in the Crows Nest bar and there was a couple in their late sixties, possibly older dancing like they didn’t care to all the modern hits. And they knew the words. It turned out that their son is a lawyer in Miami and one of his clients is Pitbull.

We arrive in the Bay of Island today with is off the coast of NZ. Bit of a dull day yesterday with the temperature plummeting to 72.

Last night I invited one of the entertainers Bayne Bacon to our table. Originally from Texas he married an Australian and now lives in Noosa Heads in Queensland. A comedian/ piano player. It went well despite him being a little sexist.