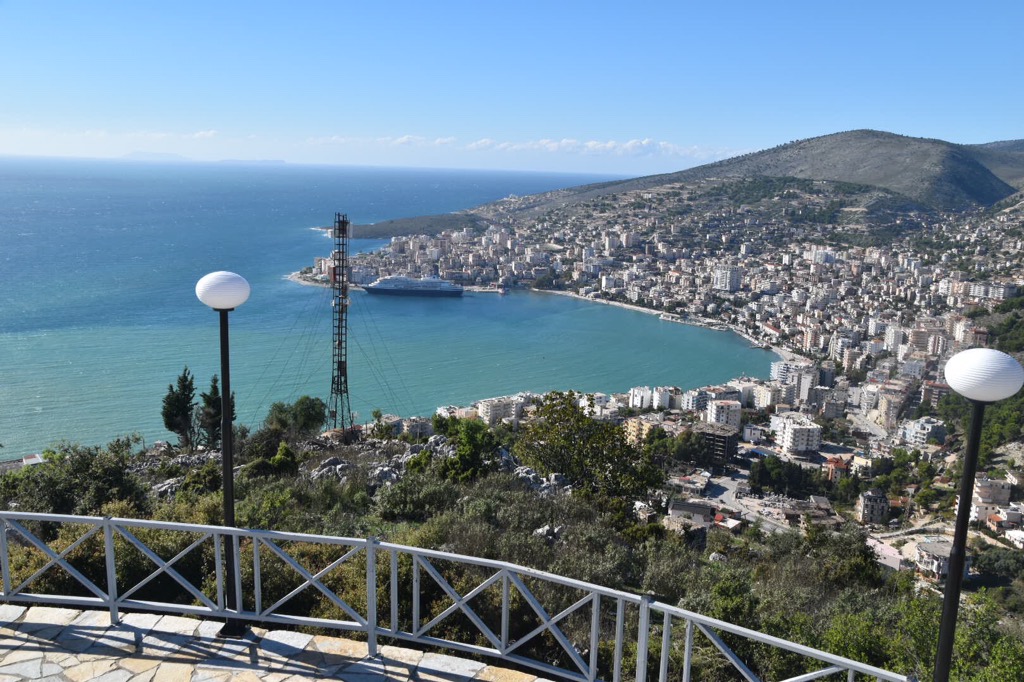 Not on the original itinerary, Albania was added when the troubles in Turkey began some months ago all because passenger safety is the most important thing to Holland America! Anyway, Turkey’s loss is Albania’s gain and by the look of it they need all the tourist dollars they can get.

We visited the area known as the Albanian Riviera and the description is fair because it’s a continuation along the coast from Greece. What becomes immediately apparent is the poverty. Albania is Europe’s 4th poorest country with an average income of $4,500 or 562,500 lek which sounds much better. $10,000 and you’re a lek millionaire.

I was booked on a private tour arranged through Cruise Critic at a bargain price of €25. There were 25 of us on a coach that was a shining example of communist engineering. There are more Albanians living outside of Albania (7-10m) than in Albania itself (3m) but perhaps the most curious thing about Albania is that if you nod it means “no” and from side to side means “yes”. I think this goes a long way to explaining their economic and social problems. They also have one of the most sinister and aggressive looking flags in the world.

Albania’s most famous son started life as Ahmed Bey Zogolli in 1895. He was the son of an Albanian chief when it was still part of the Ottoman Empire. He held various government offices including Prime Minister. After returning from exile he established himself as President but this eventually proved too junior so in 1928 he proclaimed Albania a monarchy and he took the title of Zog I, King of the Albanians. Handsome, reserved and ruthless (that potent cocktail) he was a chain smoker who loved Charlie Chaplin films. Mussolini ousted him in 1939 and Zog went back into exile and for part of the time lived in the Ritz hotel in London. I can just imagine the scene as he strode into the lobby in his regal finery, ringing the bell and saying “I am Zog the first, King of the Albanians. Have you got a room”. Reading about Zog I couldn’t help thinking about the Woody Allen character Zelig.

The tour headed to the ancient city of Butrint (another UNESCO WHS to tick off) which was a fascinating place and apparently the number one tourist attraction in Albania. I was the youngest and nimblest of our group and the terrain wasn’t easy especially as it was pouring and the day before there’d been a deluge. A lot of the site was waterlogged and the pathways and steps were slippery which of course added to the entertainment value. Renee from Canada with her walker fell at least once and I did wonder why she was on the tour. I was losing the will to live so I left the group and went ahead armed with a wet map and I had a chuckle at every obstacle the group, but in particular, Renee were soon to encounter. The cattle grid bridge was my favourite.

Whilst these tours have very knowledgable guides who insist on stopping at every “significant” point and explaining in great detail everything you never really wanted to know about some ruin, a quick summary would be sufficient and anyone wanting to know more could google it to satisfy their yearning for a more in depth understanding of Albanian archaeological antiquities. I cannot be the only person who thinks this?

We drove back to Sarande for a spot of lunch: €5 for a pizza and Diet Coke and then off to what for me was going to be the highlight of the day, the Blue Eye Spring. Well I can’t remember the last time I felt that underwhelmed. Some countries do tourist attractions well but not the Albanians. I was also been befriended by one of the sauna crowd who was on the tour. Indonesian/ Dutch with hairless legs and a big camera lens.

The last stop of the day was at Lekuresi Castle built by Suleiman the Magnificent, 10th Sultan of the Ottoman Empire. He was around at a similar time to Henry VIII. If the last place was a let down, this more than made up for it. The views were breathtaking although it was a little breezy for some of the older folk.

Some other Albanian facts. They have 36 letters in their alphabet; there are no McDonalds restaurants and seat belts are optional. They have applied for EU membership but they only qualified on half a dozen of the 8,000 rules. They are also one of the most corrupt countries in the world.