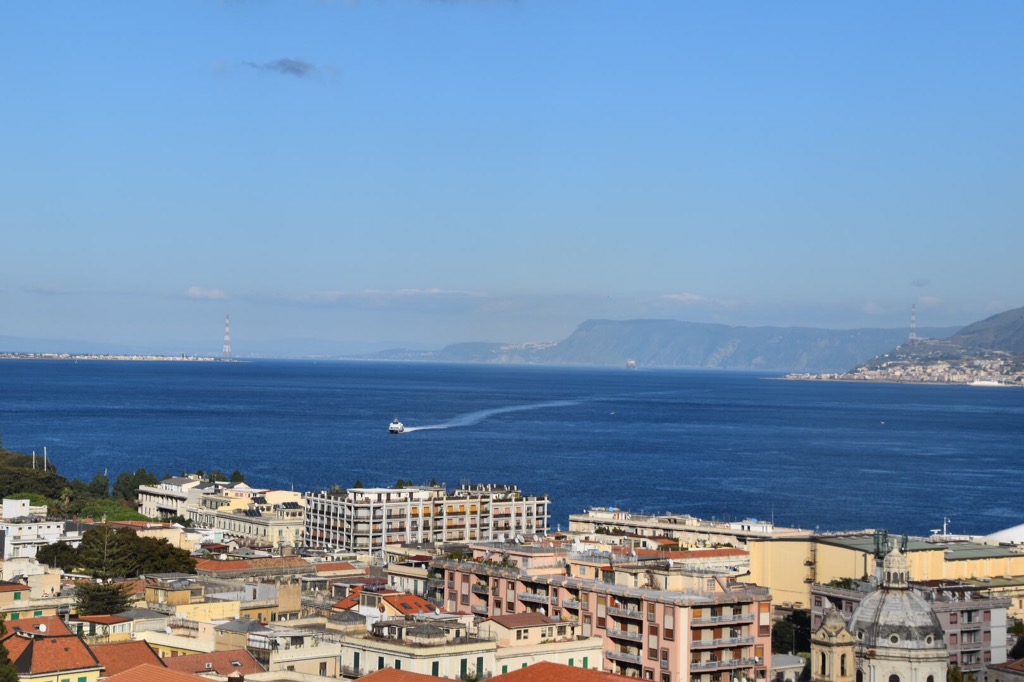 We sailed into Messina on the northeastern tip of Sicily on Tuesday morning looking forward to our day on the largest island in the Mediterranean. The top five are Sicily, Sardinia, Cyprus, Corsica, Crete. Sicily is separated from the mainland by the Strait of Messina which at its narrowest is just under 2 miles wide.

Nancy and I were keen on seeing Mt Etna and Susan and Brenda wanted to see Taormina and as they were in the same direction we decided to do both. Until this point our taxi drivers have been fabulous but the winning streak was about to end. At first I was speaking with a nice chap called Salvatore who had a kindly face and spoke good English but alas there was some kind of pecking order and we ended up with Guido the Killer Pimp. Etna was 100km away and the fare for the whole tour was advertised at €340 which was a little pricey but Guido had a 9 seater taxi so at least we’d have plenty of room.
Taxi driving was a curious choice of occupation for Massimo (his real name) who had appalling manners, drove like a maniac and looked like the kind of person you might hire to exterminate pests in your crawl space. I think it’s fair to say we didn’t take to him. On the plus side, we did reach Mount Etna quite quickly and as we drove up the winding road to the summit it became clear that the weather was anything but clear and fog and low lying cloud was going to impair our view. I say low lying cloud but we were at nearly 11,000ft so I guess the clouds were allowed to be there.

Coupled with the poor visibility it was also very busy and quite chilly and my clothing choice that morning was starting to be a concern. We had a look at the crater, took a few photos and succumbed to the lure of the magnet shop but 20 minutes later we were back in the taxi heading for Taormina.

Taormina is a small village on the coast and is absolutely lovely. Guido tried to stiff us on the amount of time we had to explore so I pointed out that we’d had less time at Etna than anticipated so we would like the extra half hour here. He accepted my suggestion. In all honesty we would have happily paid him off and never seen him again but apparently we’d agreed to a tour and it was “not possible”. Mankind has put men on the moon, split the atom and mapped the human genome but stopping a sightseeing tour early was a step too far in human possibility. He really was an arse.

We could have spent the whole day there such was the charm of Taormina. So it was back in the taxi with Mad Max back to Messina. When he dropped us off he uttered the words “tip for me” more than once and in truth he’d been so bad I wanted to kick him in the testicles which I know is a little harsh but he really was awful and I hate it when people cause me to choose to feel so negatively.

Back in Messina we went to a few churches and I climbed a bell tower (one of my new hobbies). On this trip I have certainly discovered a liking for churches. I can remember years ago feeling a little daunted by them. It wasn’t as bad as Damien’s reaction in the Omen but they certainly gave me the willies. Now I’m learning to really appreciate them (one of my new hobbies). On the way back to the ship I bought another tea towel and I’m seriously thinking about voluntarily entering into therapy to see if I can stop this worrying trend.

From the port of Naples we were spoilt for options. Capri, Sorrento, Positano, Pompeii, Vesuvius, the Statue of the Lactating Man. We settled on Herculaneum which is Pompeii’s less famous half-bother’s niece. Upon leaving the ship we were set upon by a posse of taxi drivers each one shorter than the next all trying to lure us into their vehicle but after the previous day we were in no mood for Italian driving so we walked to the train station and caught the Circumvesuviana. The ride took 20 minutes, cost two euros and gave us a short ten minute walk to Herculaneum at the other end.

Quick bit of history. On August 24th in 79AD at about lunchtime Vesuvius erupted and on day one Pompeii didn’t fare too well because of the wind direction. On the second day it was Herculaneum which suffered due to a shift in the wind direction and a series of pyroclastic surges which are nasty business. Herculaneum ended up being buried under 60ft of ash and due to the nature of the disaster, a great deal was preserved in rather good nick. It was quite moving to walk around the city streets and try to imagine the terror they must have experienced. It is estimated that 75% of the city is still buried. I think that would suit Penge.

On the way back to the station we stopped for lunch and as we were in the city that invented the Margherita pizza and where the first pizzeria opened in 1830 I thought I’d have a cheeseburger and fries with a glass of urine coloured wine. Well I didn’t exactly ask for urine coloured wine. That’s just the way it came. After lunch we enquired about getting a taxi back and were quoted €50. I said something rude in Klingon and we decided to get the train instead.

Naples is meant to have some lovely places but we missed them all and the waterfront where we walked to the station was ugly as hell. A carbuncle if ever I’ve seen one. I’m sure I will return here at some point so perhaps I can see the highlights of Napoli another time.  Ack on the ship,  it was our last night so seven of us ate at the Pinnacle Grill which is the upmarket restaurant on all Holland America ships and it was super. Then four of us hit the hot tub before I had my final game of BJ and I won for the third straight night. Those lessons are paying off. I was given a letter from the casino host which may entitle me to something on the next cruise.

It has been a great trip and I’ve met some fabulous people whom I will stay in touch with (the cheque’s in the post). Some of us are already planning a cruise around Australia next October. The next cruise for me is in January round South America for 67 days and my biggest fear is the amount of magnets I may accumulate. I must have bought 30 on this trip so I need to cure this strange affliction or buy a bigger fridge.

We arrived in Civitavecchia (Rome) this morning and I’m flying home this afternoon.