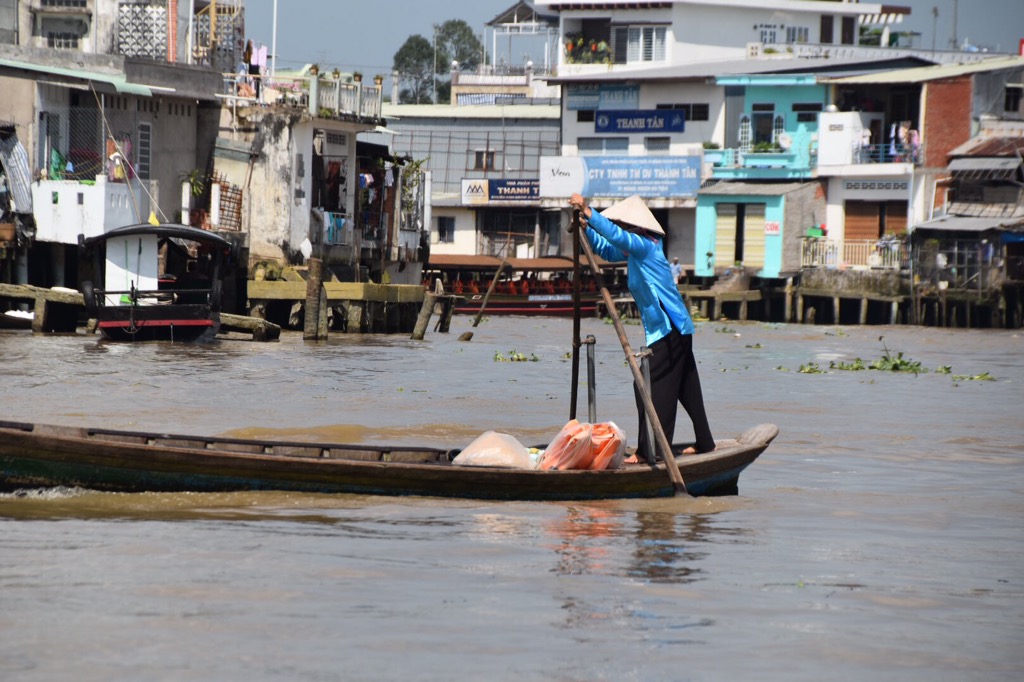 On Tuesday we left early as we had to be at the Vietnamese border by 12pm. The traffic leaving PP was atrocious. We had a four hour journey and many of us were trying to sleep but every now and then the bus would hit a pothole violent enough to kill a small dog. The border crossing at Ha Tien was so much quieter than Poipet but took just as long and we met out new guide, Doan who speaks English with an Aussie accent. Most disconcerting.

We weren’t far from our hotel which was apparently the best in town. It turned out to be a rather drab and nondescript town on the southern coast of Vietnam but the rooms were the best so far and I had my very own toilet seat which I now regard as a bonus feature rather than a standard one.

We all changed up some money at a rate of 28,000 dong to the pound. Cambodia accepts dollars everywhere so there was no need to get any riel but the Vietnamese are obviously less friendly towards the greenback. Both lunch and dinner were abysmal from the perspective of an unadventurous fussy westerner.

We cycled from the hotel and hugged the coast for a while before heading inland and following a canal. We had pedalled 50km by 11am and then visited another killing field as we were close to the Cambodian border. I would suggest that one killing field is generally enough. Lunch was around the corner and it was noodle soup. Now there’s nothing wrong with noodle soup, especially after embracing my inner noodle but I’d just cycled 50 bloody kilometres and I could have eaten four chickens so noodle soup wasn’t the tucker I was hoping for. Cycling was over for the day therefore we had some time to fill so Doan had arranged a bird watching boat trip for us. At best it was a curious interlude as we drifted through the canals sitting on hard wooden planks trying to spot birds.

This was the day that had a few of us feeling quite anxious as the overnight accommodation was described as “homestay”. None of us knew what to expect and we’d become accustomed to some of the finest cheap three star hotels in Indochina. Whether or not my bathroom would have a toilet seat was the least of my worries.

During the day we’d cycled another 50km passing through some backwater villages and paddy fields. It really was a lovely ride just seeing people go about their everyday lives. Lunch was at a crocodile farm and I tried some crocodile in a pepper sauce which was like chewy chicken.

Doan told us about the corruption in Vietnam and he gave an example of a driving licence whereby you need to take test but if you don’t want to do that you can just pay $200 instead. He said that everything has a price and that the government officials were the highest paid in the world. Doan cannot get a government job because his father fought for the South Vietnamese in the war with America and as a result he has been blacklisted. The South Vietnamese didn’t fare too well after the Vietnam war and those of you who remember the news stories about Vietnamese boat people: well they all supported the South in the war and were leaving in search of a better life elsewhere as their opportunities were limited in the unified Vietnam.

Of a population of 96m, there are 6m members of the communist party and these people are generally wealthy and above the law. Police cannot arrest them.

The homestay was actually very pleasant and exceeded everyone’s expectations (secret of a happy life). The food was very good, the beer was cheap and the company was magnificent.

I decided not to go on the 20km cycle today as the terrain looked dodgy and we’d had rain overnight. So I sat in the sunshine on the dock with my cyclists tan trying to even things up.

By mid-afternoon we’d reached Ho Chi Minh City where the tour ended and our merry bunch of Lycra wearing cyclists went their separate ways. Over the past 12 days we’ve cycled around 400km and seen some fantastic sights. Our group has been brilliant, the guides, somewhat political at times, have been good and the food has been interesting. After this experience I’ve been turned-on to activity holidays. From this trip I shall take away some great memories, some new friendships but most importantly I’m looking forward to a future with more resilient buttocks.