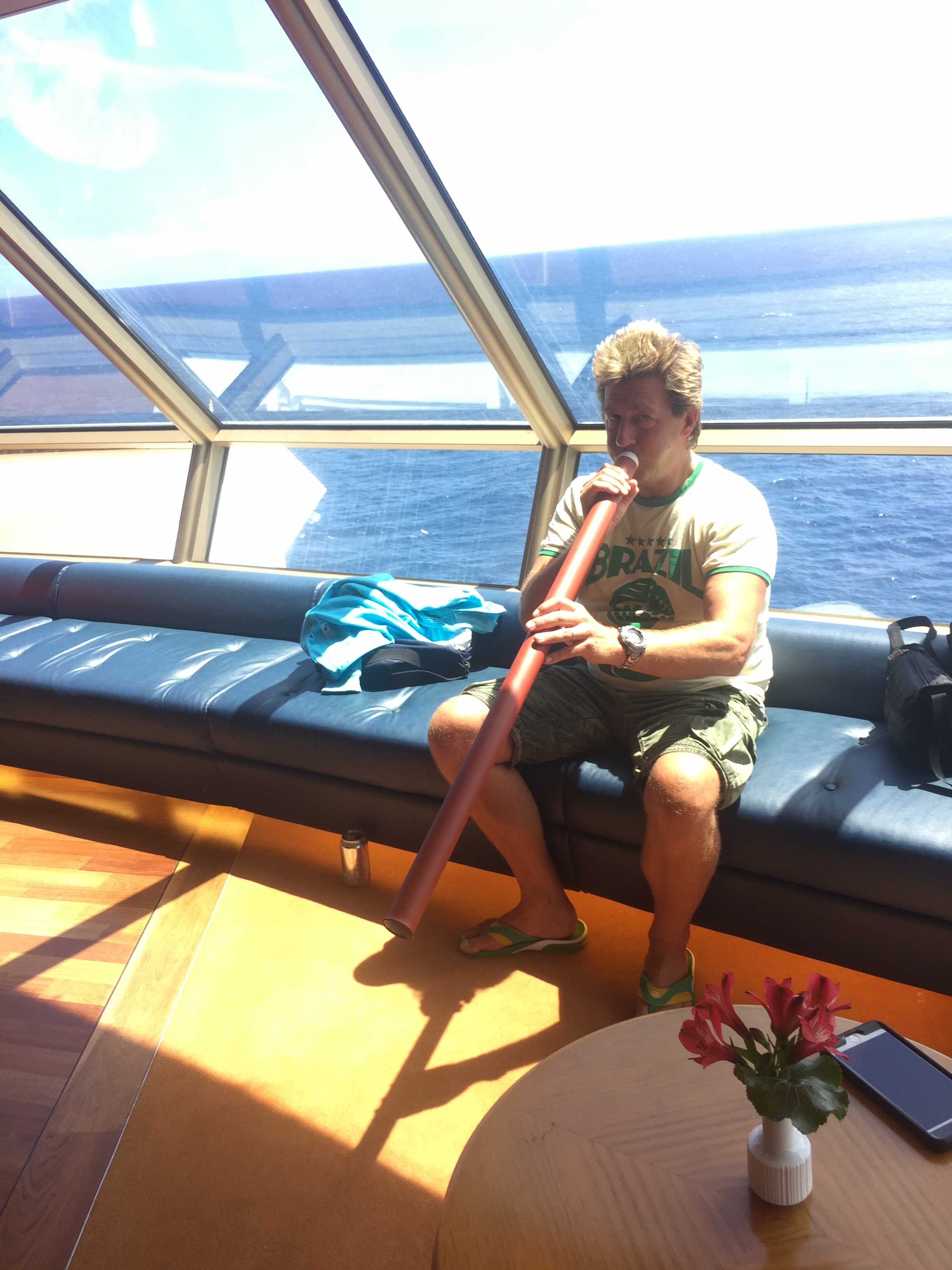 The storm we were due to pass through was avoided in large part because the captain took a detour. We ended up with 10ft swells instead of 15ft but they still put the sick bags out at every lift shaft. I think some people were affected but they stayed in their cabins so the rest of us were saved witnessing the involuntary sick bag filling which can be infectious.

There are about 600 crew members onboard and they can be split into nationalities. The Filipinos run the bars. The Indonesians run the restaurants and also housekeeping. The Indonesians are also the maintenance guys including a painting crew whose job is like the Forth bridge. The casino is a blend of Eastern European and Spanish and all other areas have a mixture of different countries represented. By far the nicest and friendliest are the Filipinos and Indonesians. The bar staff get paid $50 dollars a month as a basic but earn 60 cents for every drink they serve so they are keen on getting the guests trolleyed. They have a crew bar in the bowels of the ship and pay about one sixth of what the passengers pay. Guests are not allowed down there.

The captain has his American wife on the ship (Karen) and she has her second cousin with her, also Karen as a free guest. The president of Holland America is getting on in Sydney (Orlando Ashford) and we already have the wife and daughter of his boss (Stein Kruse – good name) and the wife of the big cheese of the whole of the Carnival Corporation onboard. They are all so down to earth and just blend in like the rest of the passengers.

All of table 303 went to Ellen and Russ’s suite the other evening for some champagne. I think Ellen was keen to show off and it was a lovely big room with a huge balcony however at $102,000 for the whole 115 days I’m not sure its value for money. It was about three times the size of my inside cabin but I spend very little time there so it does me just fine.  We’re all playing up to Ellen to make her feel important. Cindy and I played bridge against her and Linda the other morning – my first real game and we were trounced. I was hoping for some beginners luck prior to doing a lap of honour. Ellen is the bridge director on another cruise later in the year and she’s been telling anyone who’ll listen how much better she is than the current bridge director. All hail Ellen. She’s one of them! I challenged her to say something nice about the current bridge director which she managed to do…just. The other day she provided the kitchen staff with a “recipe” of something she wanted cooked and of course they got it wrong and there she was moaning about how the sauce should be on top and created a right hoo-ha with the head chef and head waiter, both grovelling to lady Ellen but in reality they wanted to throw her overboard as did the rest of us. I’m not sure she’ll make my pen-pal list.

Having said all that, our table really is delightful and many of them have commented about it being the best table they’ve ever sat at during a cruise. The dynamic just works with no-one dominating and everyone adding something. It’s funny how that happens sometimes. If match.com did seating plans they wouldn’t have put us all together.

There’s a real sense of community on board with smaller groups sprouting up. I’m now in a core group of singles ranging from 30 to 60 and it’s great fun. Seeing the same people every day for 30 plus days produces a strange bonding and we literally are “all in the same boat”. I can see how long term friendships develop on world cruises. I’m looking at a 67 day cruise round South America starting January 3rd next year if anyone’s interested. Visits Antarctica and the Falklands as well as the Amazon and 6 or 7 countries in South America.

Our cruise director had to plan evening entertainment for 115 days which cannot be easy and so far we’ve had some enjoyable acts. The other night was curious though when we had a guy playing with his yo-yo. It was more like a children’s party but it certainly was different. Then the didgeridoo player burst an eardrum (a common injury amongst the didgeridoo fraternity) and couldn’t perform so the yo-yo man stepped in for a second show of tantalising yo-yo magic.

I’m wondering at what age I may decide the time is right to wear socks between my feet and a pair of sandals. It’s a tricky dilemma with sartorial considerations on one side and I don’t give a sh## anymore on the other. In an attempt to delve into the psychological world of “sockandling and sockandlers” I wonder whether it’s an absolute “I no longer care” or whether the descent is a steady decline and the colour of the socks still actually matters in the early days of sockandling infractions.

There was a lecture the other day about how so many historical characters had succumbed to the lure of Pacific Islands. Herman Melville, Marlon Brando, Paul Gaugin, Thor Heyerdahl, Charles Lindbergh, Mark Twain to name some of the most famous. Was it the unspoilt beauty of these paradise islands; perhaps the intoxicating cultural variety. Maybe the easy laid back pace of life offering peaceful solitude. In my opinion it was the half naked women but I’m no expert.

Today was our last sea day before we hit Melbourne and on the board today were how to play the didgeridoo and the finals of the cake decorating contest. There were heats? I had a go at the didgeridoo and the technique is similar to blowing raspberries which we all had to practise first. So I’m sitting in a room with 50 people blowing raspberries which sounded like “group flatulence”. Needless to say I got the giggles.

The casino shut at 7pm because we will be within 12 nautical miles of Australia and countries can make some sort of territorial waters claim. Sometimes it’s as little as 3 miles but the general rule is 12.

Other tales of fatalities on cruises, I heard a story of one chap who died whilst on an excursion. He was with his wife and another couple. Now they can’t exactly bring a dead person BACK TO the ship so they all got off with their luggage. It’s all about timing.

Talking of luggage, Ellen and Russ have 15 suitcases with them. 2 to Russ, 13 to Ellen including her printer/copier. Always useful at sea. There’s a gay couple with even more than that according to the ship grapevine.

The last formal night was on Saturday and we had a ships officer with us. Well Barbara isn’t exactly an officer. She runs the shore excursions but it meant free wine as we had an officer hosting the table. I wish I’d known this before. I would have invited one every day.

One of our group, Mark, was in hiding yesterday after some inappropriate behaviour on the dance floor. Apparently it wasn’t the first time and security were called by the bar staff. They take things like this seriously because of potential lawsuits. Protecting the passengers is highly important.

A final piece of randomness, I met two married chaps yesterday called Russell and Stephen who were doing needlepoint in a quiet corner of a lounge. Russell was making a frog beanbag and Stephen was making a small house which he said he spends 4 hours a day doing. They’ve been married for years and were an attractive well groomed couple. I took an interest out of politeness however I won’t be joining them any time soon.