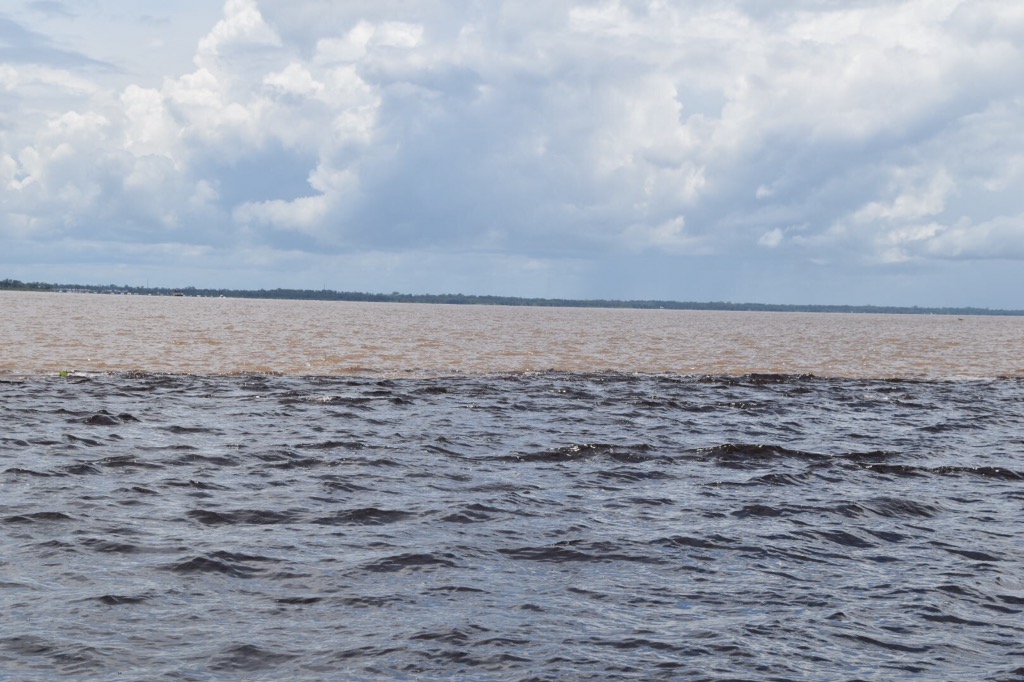 After leaving Fortaleza we had another sea day as we headed north to the Amazon for a week visiting five different ports. Sea days are great for relaxing and possibly taking part in a new activity. During my morning walk I pass by the Tai Chi folk moving gracefully and with purpose and often think I should have a go but I’m worried I’d get the giggles.

In the evening I tried to win Name That Tune on my own but came third. After that we had another Officer’s Ball which was my chance to dance with Charmaine from the front desk. A simply delightful young Filipino who I met on the last cruise in October and was responsible for raising my heart rate every time I saw her. She has been promoted since then and is now a petty officer hence attending the ball. At 31 I think it’s fair to assume that she is far too young for a man who’s beginning to regard “walking” as vigorous exercise.

Our first stop was Belem which is Brazil’s 11th largest city in the state of Para (Brazil has 26 states). It is regarded as the gateway to the Amazon and lies on the river Para which is part of the greater Amazon river system. Another unremarkable Brazilian city where vigilance was required. We went around in a pack as we visited the cathedral, the governors palace and a theatre before heading back to the ship. I think most of us would have preferred a whole week in Rio and skipped these other cities.

Our first day of penetration saw the water change form a nice blue to a curious brown. We had passed by an island called Marajo at the mouth of the Amazon which is the size of Switzerland and the largest fluvial island in the world whatever that means. Once we entered the river I was expecting the river banks to be about a hundred feet away with tall trees, monkeys swinging from branches and perhaps a glimpse of Tarzan. How wrong I was – the Amazon can be up to 30 miles wide so even if Tarzan had been swinging from a vine we wouldn’t have seen him. Despite my visual disappointment we had a terrific day on the back deck in the pool with a mixture of sunshine and rain. It’s not every day you get to swim in a pool on a cruise ship sailing the Amazon being rained on in 90 degree heat.

That night we had a cello player who aroused me as much as the flute player. I’m starting to get worried. We’ve got an oboe player next week and I’m not sure of the colour! Team Patrick finished joint first in the evening trivia game. Four points for naming the big four accountancy firms.

Saturday was our first day waking up on the Amazon river with the sun rising at the stern and beautiful calm waters. It made the morning walk most enjoyable (awesome for American readers). We’d crossed the equator going north only to cross it again going south so our Neptune ceremony will be on the next and final crossing.

Santarem was our second stop some 450 miles up the Amazon. We piled into two taxis and headed for Alter do Chao which was apparently the Amazon’s answer to the Caribbean. In fairness it was pretty special and we swam in the Amazon without incident. It was the drinking that caused the commotion. Four of the ladies had some sort of Brazilian speciality and after downing just two drinks Sheryl’s legs started to malfunction. Deanna and Lydia were in slightly better shape whereas Alexa wasn’t affected at all!

Sheryl’s list of achievements were: falling backwards off her beach chair into the water; then performing one of those walking backwards then sideways becoming more unsteady with each step as her body chased her legs before falling on her arse routines whilst taking a photograph and the taxi ride back to the ship which was interrupted by two unscheduled puke stops. Once back at the port we needed a wheelchair to get her back on the ship. Sheryl is very normally very elegant which made things all the more amusing.

On Sunday we were tendered ashore to a small village called of Boca da Valeria with a population of 120. It is so tiny it’s not even listed in Wikipedia. This place was fairly primitive. Not loin cloth, blow dart, boobs out primitive but certainly without many of the mod-cons that would make life intolerable. It was a very popular stop and we were relieved of several dollars by children and locals who had either dressed up, had found a jungle creature for a photo opportunity or just begged. Toucans, sloths, caymans and the Amazonian Woman of Plenty were my weaknesses.

We left mid-afternoon so I went to front desk to get a movie. “Wall Street 2 is the follow up to a great 80’s movie called Wall Street” I informed young Mandy. I said “you probably weren’t even born in the 80’s” to which she replied, “my parents hadn’t even met in the 80’s”! We are no longer on speaking terms.

On Monday we reached the furthest point we visit on the Amazon, Manaus which is a huge city 1000 miles upstream. Manaus has an interesting history. Nicknamed the Paris of the Tropics it is home to 2 million people. In the late 1800’s Manaus was the richest city in South America due to the rubber boom from 1879 to 1912. The demand for rubber was increasing in Europe and other parts of the world and at the time the only place that latex could be found was the Amazon region of Brazil. Fortunes were made by the rubber barons and the city developed in line with the new found wealth including the most famous landmark the Teatro Amazonas, a 700 seat theatre modelled on an opera house in Paris. More on that later.

The boom eventually came to an end due to an Englishman named Henry Wickham. The far-sighted Wickham had smuggled rubber tree seeds out of Brazil in 1876 and planted trees in various parts of the British Empire where rubber could be extracted more economically. With cheaper prices found elsewhere, the demand for Brazilian latex fell and the economy in Manaus stagnated.

We were booked on a speedboat tour with Alexa and it was chucking it down. I’m not sure what I was expecting. We were in the rainforest after all. What did astonish me was the amount of debris floating in the river. Branches, twigs, logs – sometimes whole trees that have fallen into the mighty Amazon a few thousand miles away and drifted slowly towards the Atlantic Ocean. They were quite a hazard for the speedboat and we had a driver who didn’t seem to care that we were being thrown around like eggs in a shoebox.

It was an uneventful trip but one has to show a degree of gratitude when one is being treated by someone else who has shelled out 1000 bucks for the boat. The highlight was the meeting of the waters where the blue water of the Rio Negro and the brown water of the Solimoes create a distinctive line and adding to the amazeballs experience, the water temperature was noticeably different, the brown being a few degrees colder.

The lowlight was a drive-by of a local beach which looked ghastly. Imagine Birmingham by the sea. In all honesty much of the 4 hours was average and that’s being grossly unfair to average. If I had paid for the day I would have complained not least for the rain!

It’s funny how places often promise so much more than they deliver. I certainly had an image in my mind of Manaus which it didn’t live up to as didn’t Tahiti and of course we can’t ignore High Wycombe which sounds like it should be peachy but is actually a bit crap.

Day two in Manaus was my chance to see the main item on my sightseeing list, the Teatro Amazonas. Completed in 1896 the theatre epitomised the excess of Manaus at the time of the rubber boom. The theatre was intended for opera and in one season half the opera troupe died of yellow fever. After the decline in demand for Brazilian rubber performances stopped but after a 90 year gap opera was brought back. It was impressive enough and I can imagine back in 1896 it would have been more so but it was smaller than I’d expected. One might even say, intimate.

I didn’t hang around Manaus long as I was conscious of the prison riot in January with a number of inmates escaping. 60 prisoners were killed during the riots, many of whom were decapitated as rival drug gangs clashed. So I walked at speed, with purpose and wearing my most aggressive clothing – a pink t-shirt, orange shorts and a pair of flip flops. We left late afternoon and headed back toward the ocean with one more Brazilian stop tomorrow before we cruise up to the Caribbean on the last leg.

Manaus won’t win any awards for attractiveness. A scruffy place that looks like it’s been in decline for over a century now which of course it has. I had envisaged architectural splendifery with the jungle encroaching on all sides but alas my envisaging has once again exceeded reality.

In the evening we celebrated Mardi Gras on the ship. I have no idea why but it was fun especially with Jack wearing just a towel. Jack is 80, lives in LA and once owned ten Toni & Guy hair salons. His wife Marcy has bad knees so she just watched as Jack jumped around like a teenager.

Our final day in the Amazon was at a place called Parintins where the local Boi Bumba dancers put on a show for us. All pre-arranged and the ship sold tickets which made me think the only reason we stopped there was so that the cruise line could make a quick $30,000. Good show with fabulous costumes. In the early evening the sunset was fabulous made all the more special by the interesting cloud formations here in the Amazon.

The Amazon has over 1100 tributaries emptying into it which adds to the overall size of the Amazon Basin of 2.7m square miles, roughly the size of Australia. At 4000 miles it is the second longest river in the world (Nile 4130) but in terms of volume it has no equal with a water flow greater than the next seven added together. It flows from west to east starting high up in the Andes before making its way to the Atlantic with a slope of only 1cm per kilometre. Depending on the season the difference in height can vary by as much as 65ft flooding a vast area of low lying land surrounding it.

I’m not sure our itinerary included the best bits of the Amazon and from what I’ve seen I wouldn’t rush back here. Aside from Rio I’ve been underwhelmed by Brazil and in truth the highlight of the week was Sheryl getting hammered on Caparinha’s.