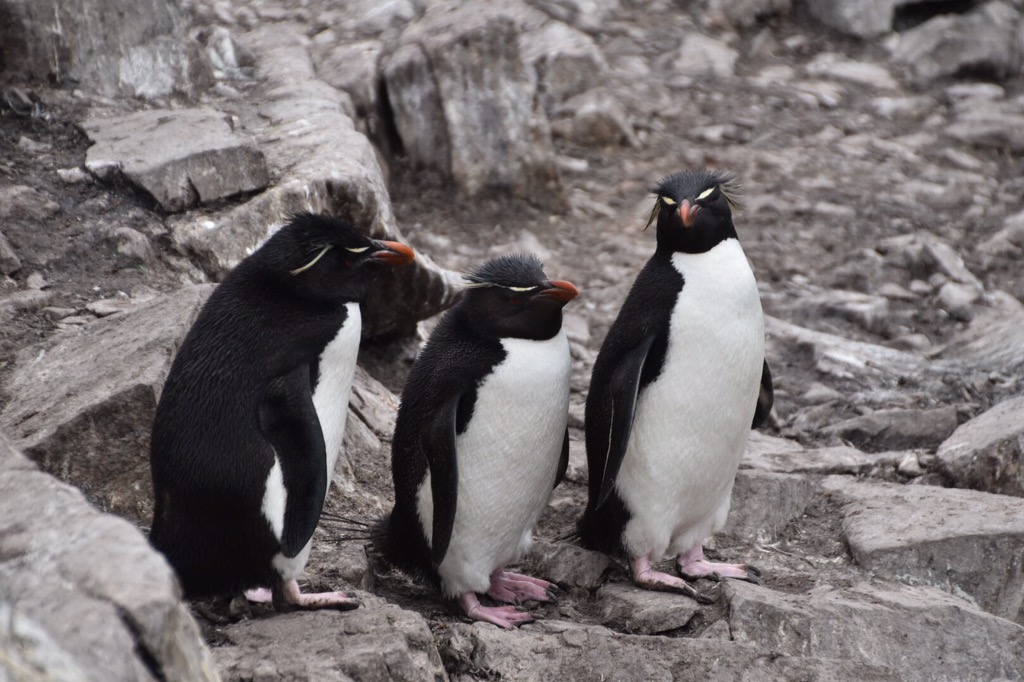 The return journey across the Drake Passage was just as smooth as the outbound trip and many people were disappointed not to have experienced the rough seas that Cape Horn and the surrounding waters are famous for. Not me. I’m still trying to shake the memory of Montserrat.

We had a sea day before our next stop and I had my tenth and final acupuncture session. I’ve actually enjoyed the experience which I realise makes me a weirdo but I will miss it. I may need to find some other ailment just to book more sessions. Afterwards I attended a craps lesson in the casino that by the end had only confused me more. Then in the evening I played with three guys (craps that is) and we had a fabulous time. What added to the fabulousness was winning $250 but now I know how to play. Not that I could explain it to anyone mind.

I’ve not mentioned a great deal about the evening entertainment but the vast majority are British and of a good standard except for Joe West who has performed twice now and was by far the best act we’ve had. A real star who can sing, tap dance and play a variety of instruments that you blow into. He’s young – maybe late 20’s and has a deep raspy speaking voice incongruent with his youthful boy band appearance. We get to mingle with the performers because they’re stuck on a ship for a week so last night I played blackjack with Tony the comedian from New York and a good chat with Mandy the magician from Wimbledon who is not allowed to play in the casino because she’s a magician. There is also a group of girl singers and one comes from Bromley.

The motto of the Falkland Islands is “Desire the Right” which makes as much sense as why 3248 people would choose to live in this god forsaken place. It has one of the most miserable, depressing climates on planet earth with a summer average temperature of 13.3 degrees celsius or 55.9 F. The record high is a whopping 75.9 F. One feature of Falklands life is the wind with an average of 20 mph and very few calm days. In fact upon our arrival the wind speed was 40 mph. There are no native trees but plenty of penguins (like trees and penguins should be linked in any way). Even the weekly newspaper (made from wood from trees) is called the Penguin News. I knew I could link them somehow.

The official anthem is God Save the Queen but they also have a Song of the Falklands which is reminiscent of an Irish sea shanty. There are 25 police officers keeping law and order on these largely crime free islands but there are six prisoners.

The capital is Stanley which is 51 degrees south so about the same as London (51 degrees north). The British have ruled since 1833 and the most surprising statistic is that the average GDP is $78,000 which is 9th in the world. There are a total of 778 islands of which the two largest are imaginatively called West Falkland and East Falkland. Only 13 of the islands are inhabited, the highest peak is 2000ft and the land area is a similar size to Wales (or Connecticut if you’re unfamiliar with Wales’ land mass). They lie 300 miles off the east coast of Argentina.

In 2013 they had a referendum about continued British rule and the result was 1513 in favour and 3 people registering a “no” vote. The 3 “no” voters have still to be identified. Before the Europeans came to the islands there were no indigenous people and today the ethnicity is 59% Falklanders, 28% British, 10% St Helenian and 5% Chilean who have arrived in recent years to take service industry jobs. Keen mathematicians amongst you will notice that these numbers add up to 102% for which I offer no explanation.

After the Falklands War in 1982 the British government has paid more attention to this remote outpost and poured money into the economy with various infrastructure projects and a permanent military base at Mount Pleasant which includes fighter jets. The Argentinians still claim sovereignty over the islands so a military presence is most welcome. There are still land mines in certain areas. The penguins are not heavy enough to set them off so they have workers from the Lebanon and Zimbabwe doing the job. I didn’t ask.

After years of relying upon the wool trade the economy is now in good shape with over 50,000 tourists visiting each year and more importantly the selling of squid fishing licences which has been highly lucrative and made the islands millions of squiddly diddlies. I couldn’t resist. In 1980 the GDP was £5m. In 2007 it was £104m. The discovery of oil will add even more economic prosperity to the islands in the coming decades.

There is only one bank – Standard Chartered but no ATMs. The internet company Sure has a monopoly and therefore charges a fortune – 70gb costs £425 per month.

A bit of quirk for you. There is a government run 9 seater plane service to various places using grass runways but there is no schedule as such. You call them and tell them where you would like to go and your request gets added to all the other requests. Then at 18:15 every day on Falklands Radio the schedule for the following day is read out along with passenger names so trying to keep your inter-island travel plans a secret is futile.

We arrived in Port Williams and things looked bleak. The cruise director informed us that we had a little bit of wind – 40mph to be precise. We were tendered ashore and it was fairly rough. Often the weather is so bad that the port is missed completely.

I was lucky enough to find a local lady running a penguin tour at a fraction of the ship’s penguin price so three of us jumped into a Land Rover and make the hour long journey which was mostly cross country to the rockhopper penguin colony. It was pleasant enough but won’t go down as a highlight. Our driver was Lianne who works for a shipping company but saves up her annual leave for the cruise ship season and takes time off to do penguin tours. She was delightful and full of information.

When the Argentines invaded and took control in 1982 they immediately made everyone drive on the other side of the road and insisted that they were addressed in Spanish. The islanders were very grateful that the British came to their aid and on the 14th of June 1982 after just 74 days the war ended. This day is now celebrated as Liberation Day. They also observe Margaret Thatcher Day on January 10th and have a public holiday called Peat Cutting Monday in October.

We asked about house prices which according to Lianne have gone up hugely in recent years. Her daughter just bought a two bedroomed place for £78,000! Her youngest son of 19 is a sheep shearer. He was never interested in school and from the age of five wanted to shear sheep (it’s a Falkland Island thing). His personal best stands at 243 sheep in one day. Top shearers can do up to 400 a day and the two best guys are currently in New Zealand at the Sheep Shearing World Championships. I tried my hardest to keep a straight face while she was telling me. Apparently they get paid by the sheep which has a beautiful ambiguity to it. 80 pence per sheep.

Transportation to and from the island is limited. Flights to the UK run twice a week on a military plane at a cost of around £1600. The flight goes via Ascension Island and then on to RAF Brize Norton. The planes also bring packages under 2kg to the islands. Before 1982 there were just two cargo ships per year that delivered goods. That was it.

We were dropped off in Stanley which is the capital and main town and I walked around for a few hours looking for anything interesting to see which I have to say was a bit of a challenge. The gift shops were excellent though. Then I found a pub, the Globe Tavern which was showing football. The most striking feature was the sticky floor. There were lots of passengers inside as well as groups of lads, presumably from the military base. A bit of a dive and not the sort of place you would take a girl to! No, I’m being too kind. It was a sh**hole.

As we sailed away in the late afternoon the skies cleared, the sun came out and all of a sudden the Falklands looked quite lovely. When we arrived, the big question I wanted to ask people was why? Without wishing to insult Lianne I did manage to ask this most pressing of questions and her answer was simply that this was her home. She was born here (at least third generation), there’s a sense of community and she didn’t find the absence of a bowling alley an impediment to happiness. Personally I couldn’t live somewhere without trees but as Lianne remarked on a trip to England in 2000 she thought the trees interfered with the view. Amazing what you get used to.