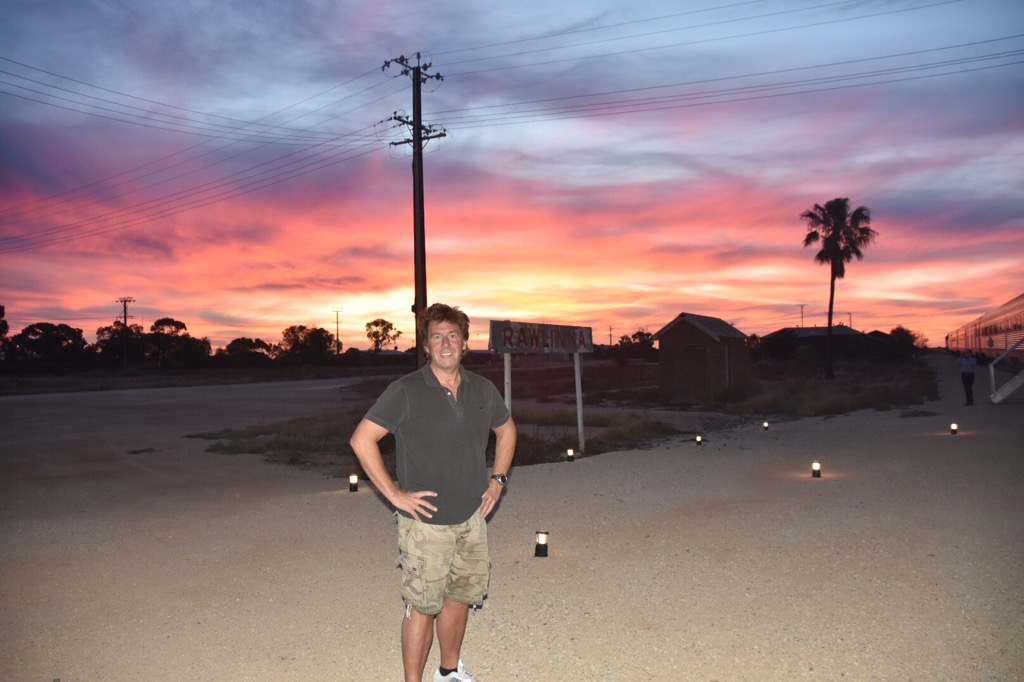 Astrid and I debarked and joined the world’s longest taxi line. I was remarkably calm about it. Katy would have been proud of me. In fact I was so calm she probably would have taken me straight to a medical centre for tests. I was finally free of the ship and ready for the next adventure. I’ve worked out that about 6 weeks on a ship is my maximum before I start going rogue.

I was hoping to catch up with Michael Medway but he was away in New York so we had an email exchange instead. After dropping the bags off at Astrid’s hotel we went walking around and found the rather glorious St Mary’s Cathedral followed by Darling Harbour and finally the Rocks which is the oldest part of the city but also the most picturesque. Sydney is a fabulous city to walk around. Just after lunch I left Astrid at the hotel and taxied to the station. It was tough leaving her as we’d grown close during the past three weeks.

The Indian Pacific is so called because it runs from one ocean to the other although I’m doing the Pacific Indian route. 72 hours covering three nights with some longish stops en route. The train is about 700m long and doesn’t exactly speed across the continent – its more of a leisurely cruise. My single berth cabin was pokey. Not even sure I could get a cat in there let alone swing one. But I did have a large window at bed height so I could watch the world go by whilst supine; I had a small sink which I used as storage (and middle of the night emergencies), a single bed that appeared from the wall, two hangers in a tiny closet and a plug socket for charging le gizmos. There were 16 berths in the single carriage and I was opposite Malcolm. Nice chap. Two showers and 4 toilets complete the room count.

I had to walk through three double berth carriages to reach the lounge bar and the doubles are much more commodious – I was envious. I had dinner with a couple named Lynne and Bob (late seventies) from Perth who coincidentally were on the cruise ship for the last two weeks (didn’t recognise them though) and another Bob from Perth who was very timid and a train fanatic. Lynne turned up with one of those breathing machines for people with COPD and as I looked at my three dining mates I thought this was going to be a fun evening. It was actually fairly pleasant. It turned out that married Bob was a retired flying carpenter and I’d not spoken to one of them before. I snuck off as soon as it was polite to do so and repaired to my fold down bed.

This was possibly the noisiest most jerky train I’d ever travelled on. As opposed to be rocked gently to sleep we were shaken violently to sleep. I did manage to get some periods of sleep which was a miracle and only twice did I think the train was leaving the tracks. I awoke at 5 and decided an early shower was required. We were on a tour at 6am at the first stop of Broken Hill, NSW. It’s an ungodly time to go on a tour but they were all included so what the heck.

Broken Hill is one of the most famous mining towns in Australia. It had the largest deposits of silver, zinc and lead found anywhere in the world and in its heyday was home to 35,000 people. Today it’s roughly half that amount and mining is still the main focus albeit using fewer people and more machinery. The first stop was a reenactment of a union meeting from yesteryear presided over by a chap called Nugget and it was truly surreal. It was like I was still dreaming. Anyway, these people had got up nice and early (every Thursday) so I paid attention and went along with it. Part two of the tour was a visit to the memorial for the hundreds of people who had died through mining accidents and incidents from the 1880’s to the present day. Rock fall was the most common reason for a miners demise but others included heart attack, being crushed by various things, a chap falling off a bicycle (1956), explosions, falls from various things that you shouldn’t fall from and my favourite (if one is allowed such a thing at a memorial), in 1893 William Williams was killed by a falling plumbob.

Broken Hill is the BH of the mining giant BHP Biliton. It was also one of the locations used in the movie Pricilla Queen of the Desert with a number of bar scenes filmed at the Palace Hotel. In fact they have a drag queen festival there every year called the Broken Heel festival. I’m tempted.

Back on the train for breakfast and we were headed for Adelaide which we should reach by 3pm for another tour (can my day get any more exciting). They like to fill up the lunch tables with four random people but I requested to lunch alone and claimed I had work to do. After 55 days on a ship and leaving my buddies behind I’m not really in the mood to start over and be Mr. Sociable for a three day trip.

Adelaide is home to the Hills Hoist Rotary Clothesline, a claim to fame not easily eclipsed I think you’ll agree. On the leather seated coach our first stop was Mount Lofty which is somewhere I missed when the ship stopped here so I was happy to be doing that. It was certainly lofty and had views of the city however a little too far away for a PWA. Next stop was the Beerenberg family farm shop and you all know how much I enjoy a farm shop. The chance to buy homemade jams had me salivating. On a par with museums on the enjoyment scale. The rest of the passengers seemed to like it though. Do I sound a bit grouchy? Post cruise blues.

The highlight of the tour was Hahndorf which is a German town 40 minutes from Adelaide and very picturesque indeed. We had the choice of a chocolate or cheese excursion and I chose cheese. It was called Udder Delights and it was basically me having a cheese and wine party with a load of old people. Then it was dinner at a German restaurant and they laid on some dancers in lederhosen. I’m always disturbed by men in lederhosen. It was like a scene out of ‘allo ‘allo. I sat with my new friends, Chris, Bonnie, Hugh and Sandy and of course Jean and Graham and Richard and Marie. I knew I couldn’t stay unsociable for long.

Travelling cross country by train has only been an option since 1970. Prior to that the different states used different gauges which is quite unbelievably daft in my opinion. It’s not a smooth ride by any stretch and the noise can be quite voluminous. Despite this I’m able to sleep quite well in the narrowest of single beds.

On Friday at 11am we started on the longest straight stretch of railway track in the world at 487km (297 miles) – Our first stop was at a small town called Cook in the Nullarbor Plain derived from the Latin meaning no trees. It was flat and you could see for miles over red dirt and scrub no more than a foot high. Every now and then you’d spot a bigger bush that wasn’t quite a tree. It was impressive in its unimpressiveness if that makes any sense. I was hoping to see kangaroos bouncing along being chased by Aborigine’s wielding boomerangs but alas there was nothing that entertaining on offer.

Cook was an small place where we had 30 minutes to stretch our legs. With a population of 4 it could be the smallest place I’ve been to. It’s used as a diesel refuelling stop for the train and that’s it.

The train fare was just over 2000AUD but it did include all excursions, meals and drinks and I can certainly put it away when it comes to vino collapso in an effort to achieve maximum value for money. I’ve found starting early is the key.

During this trip I’ve spent several hours just staring out of the window into the vastness of the outback. Australia goes – sea, city, bush, outback, bush, city, sea. For several hundred miles it’s been flat as a bowling green so an easy railway track to construct except for the remoteness. And of course the extreme heat. And let’s not forget the deadly snakes. Or indeed the killer spiders that lurk in the dunny. Other than that, building this railway was a cinch.

One of the outposts on the long stretch of track was a place called Forrest with a population of 18. As well as a railway siding, back in the early days of aviation it was a stopping point for cross continent flights and has a dirty great airstrip running north to south. With the flat ground I would think that the runway was fairly easy to build except for the remoteness. And of course…

Our second stop of the day was for dinner under the stars. How romantic. Me and a load of old duffers, some of whom had escaped nursing homes to be on this train. The town was called Rawlinna and as well as being a railway stop and small lime mine it is also the largest sheep station in the world measuring 3900 square miles making it bigger than Cyprus. There have been some notable derailments at Rawlinna which brightened my mood no end.

We got off the train as the sun was going down and 160 of us sat along long tables in the open air right beside the train. Quite a bizarre experience but very pleasant nonetheless. The sunset was magnificent. You’d wait all year to have one like that in the U.K. but here they’re like that all the time. After dinner we re-boarded and I had a drink or two in the lounge talking with Jean and Graham (both 80) about the future of the oil industry and reincarnation. Fascinating couple.

On Saturday I awoke to a beautiful sunrise that I could see from my bunk and the trees had returned to the landscape. We’d pushed beyond the Nullarbor but we were still several hundred miles from Perth. The day was uneventful and I made some more friends in the bar car. Interesting how many train buffs were on board! I’d normally cross the road to avoid them. We finally arrived at three thirty having crossed Australia and I headed for the Novotel for my first bath in two months. More like a foot trough than a bath with dodgy taps and an ill fitting plug but I blissfully wallowed regardless.

My challenge, to drink a glass of Sauvignon Blanc in every Australian city got fully underway in the evening and then I retired to a “land bed” which I haven’t enjoyed for a goodly long time.

Well I’ve had a thoroughly lovely time in Oz and now I’ve visited all six states and their capitals, the two territories and their capitals, travelled 4,352km across the country on the iconic Indian Pacific and not made a single “bush” joke. Despite all this I’m already planning the next trip as there are still things to see and do – Uluru, Alice Springs, the Ghan, Port Douglas and revisiting Perth, Cairns, Melbourne and Sydney. Might be a three-weeker if anyone is interested.

8 Days in the Pacific

Today we reached our first Pacific island, Nuku Hiva in the Marquesa Islands of French…