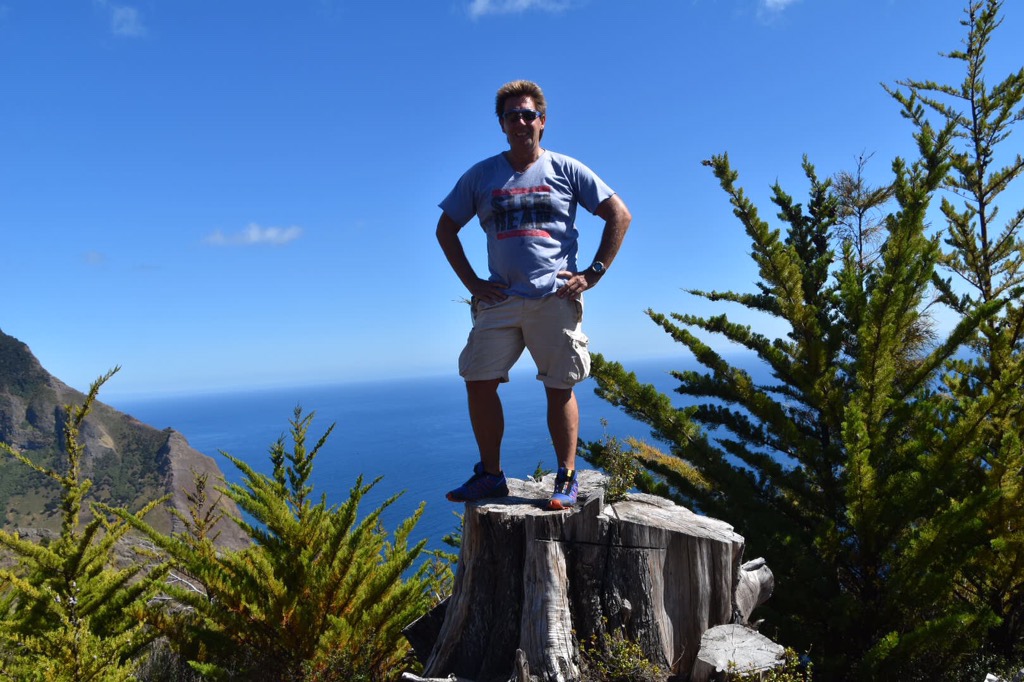 Located in the remote Juan Fernandez Islands 416 miles off the west coast of Chile, Isla Robinson Crusoe is where Royal Navy officer, Alexander Selkirk was marooned in 1704. He was put ashore following an altercation with another officer and spent four solitary years on the island before being rescued. He was said to have been the inspiration for Robinson Crusoe by Daniel Defoe, first published in 1719 although in the fictional version he was marooned for 27 years, had a companion called Friday and it was an island off the north coast of South America. Other than that it was identical.

The island itself is mountainous with a population of just 859 – less than the ship if you include crew. The bay we docked in was surrounded on three sides by green hills covered in rocks and conifers creating a landscape similar to that of the Norwegian fjords (or Alaska as some people remarked). They get about six cruise ships per year from December to April.

What seems to be even better than low expectations (for a happy life) is no expectations and for this stop I had absolutely none and it blew me away. By far the best place we’ve stopped thus far and I actually enjoyed it more than Machu Picchu. There were no excursions on offer as the island is small and the population even smaller so it was freestyle. Normally on these type of stops you mooch around the town for an hour or two wondering who on earth would live here but this place was one big national park and you could hike the various peaks. I’ve always been partial to a few peaks so off I went in search of a fabulous view. I had asked my dining table the night before if anyone wanted to come with me but the level of keenness barely registered on the excitement scale. Off I trekked on my own and two hours later after chats with fellow climbers I reached the top. I say climbers making it sound like we were scaling the Matterhorn. It was a hill. A big hill but still a hill.

My first encounter was with Elaine and Kurt from Switzerland who now live in Siesta Key, Sarasota – one of my favourite places. They were winners in the green card lottery in the late 1990’s. At the top I met Max and Mary from Phoenix, Arizona followed by David and then Gerry who was a ten pound pom back in 1968.

It’s interesting that if you go on a shore excursion with 50 other people you might not talk to any of your fellow bus mates all day but shared adversity such as hillclimbing, potholing or even passing on a wobbly bridge and you’re much more likely to strike up a lifelong friendship. Maybe that’s an exaggeration but you get the point. A passenger told me a story about New York in the 1950’s when there was a terrible snow storm. People who’d previously kept to themselves started speaking to one another. Then when the snow melted they went back to ignoring one another. It is one of the curiosities of the human condition.

Back to the hill. The views were breathtaking. As good as anything I saw in Norway last June and it made me feel so alive. I spent an hour walking along and around the peak in beautiful 80 degree sunshine with a cooling breeze and I reached a height of 1500ft asl according to my new altitude app (every serious mountaineer should have one)😉. I’d even go as far to say that it qualified as what Abraham Maslow described as a “peak experience”. Not had one of them for a while.

Tragedy struck Isla Robinson Crusoe on 27th February 2010. Following an earthquake moments before, a 10ft tsunami hit the island killing eight and travelling up to 300m inland. Things could have been much worse had it not been for a 12 year old girl who felt the tremor hundreds of miles away and ran 400m to ring the alarm gong. It was early in the morning so many of the islanders would have been sleeping.

We sailed away at 4pm in beautiful clear blue skies heading back toward the mainland for our next stop. A truly outstanding day and then I won 50 bucks playing BJ. All is good (well nearly all).

A day as sea followed and Sheryl and I took our first tango lesson. We were terrifically tragic so it could well have been my last but you never know. After tango was bingo which I definitely won’t be doing again.

Our penultimate stop in Chile, or Chee-lay as the Americans call it was the town of Castro on the Isla de Chiloe which is Chile’s second largest island just a short distance from the mainland. The weather was gray and disappointing which never helps a town in my affections but this one would have struggled in brilliant sunshine. The buildings, many made of wood were brightly painted both in pastel shades and bold primary colours trying to inject some zest into the town but it really was lipstick on a pig in my opinion. Also, Castro followed on from Isla Robinson Crusoe which is a tough act to follow. Having said that, other guests were full of praise for Castro: one even said it was his favourite stop which just goes to show how subjective port popularity can be.

By the afternoon the weather had improved and we left Castro and sailed through the Darwin Channel on the lookout for whales. I saw a log and some seaweed. In the distance were the snow-capped mountains of the Andes which were spectacular and over the next two days we head further south through the Chilean fjords which we are all looking forward to.
Next stop Punta Arenas.