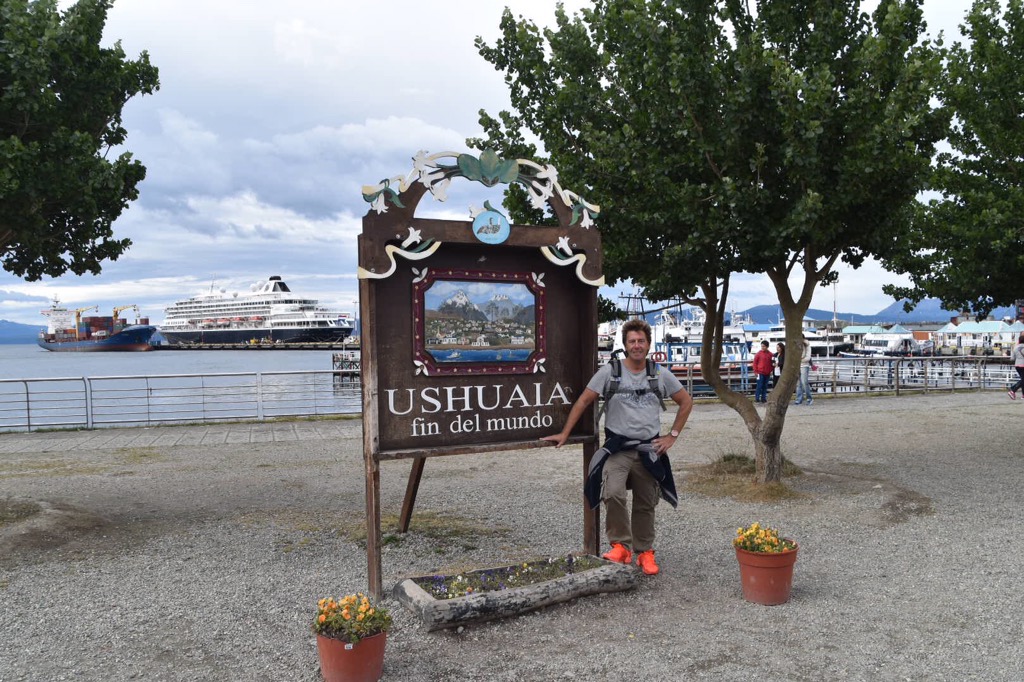 We’d already passed Ushuaia on the way to Cape Horn before heading back for a port stop. I left the ship late as I was watching Federer vs Nadal which went on a bit, but we were there until 8pm so I had plenty of time. Ushuaia is the southernmost Argentinian town on the island of Tierra Del Fuego which belongs to both Argentina and Chile. This was our first stop in Argentina and I was hoping that they’d forgotten about 1982 and the sinking of the General Belgrano.

I had no real plan but I was on my own which allowed me to move at a pace in the balmy 11 C. I decided to take the Train to the End of the World. I shared a taxi with a couple from the Czech Republic who were hoping to halve their expenditure. We split it two ways but I’m not sure if I should have gone for three ways after all it was I who had to sit in front with toothless Miguel. I’ve been asked this before by people who loiter around taxi ranks looking for a lone traveller going in the same direction.

The Fin Del Mundo as they call it in Ushuaia is like a toy railway with tiny carriages and very small seats. It’s the world’s southernmost railway and it had a Thomas the Tank Engine feel about it. I bought a first class ticket because I’m getting accustomed to South American luxury train travel. There were just sixteen seats arranged in four sections of 4 split by a walkway giving eight face to face pairs of seats with a table in the middle. I say table but that’s rather insulting to tables; more like a square piece of wood. The Southern Fuegian Railway took us the last 7km of the original 25km route. It was most peculiar. Like going back to primary school and being too big for the seats. Primera Clase afforded us two drinks; one alcoholic, the other not so I had wine and water figuring if it was good enough for Jesus. The train line was built by convicts after a penal colony had been established there in the late 1800’s. At its height in the 1930’s there were 600 inmates which was well above the capacity of 380. One of the most notorious prisoners was Cayetano Santos Godino better known as the Midget with Big Ears who was accused of killing 12 children – I suspect they may have teased him and paid the ultimate price.

Our destination was the Tierra Del Fuego National Park. I can’t think of many place names that are more enjoyable to say than Tierra Del Fuego. Other personal favourites are Timbuktu, Vladivostok and Penge. It means Land of Fire but originally it was supposed to be named Land of Smoke but the Spanish wanted to dissuade other nations from going there so decided a more fearsome name should be chosen.

Well I could have walked faster than this train and the commentary was a waste of time because of the train noise. There were only seven of us in the FC carriage and there I was travelling to the end of the world sipping sauvignon blanc. We stopped after about fifteen minutes at a small station for a Kodak moment when another train pulled in which was filled with fellow cruise passengers on an excursion. Gawd knows what they paid but they looked cramped and squashed and none of them had a square piece of wood in front of them with a glass of vino and a salmon sandwich. My train also had some independent ship passengers indeed my carriage has a couple of Swedes from the ship and a Spanish family of four. We left the station before the other train and as we passed by I raised my glass to my fellow cruisers and felt like David Niven. Not had a Nivenesque moment for a while.

The landscape of TDF reminded me a little of the New Forest. Wild horses roamed the lush pastures which were surrounded by green hills. At the other end I had a choice of a ten minute stopover or a three hour stopover. It started to rain and I wasn’t prepared for moisture so I did the ten minute option and came straight back. The main highlight was the train so I was perfectly happy. Gazing at the landscape I couldn’t help thinking about beavers.

Beavers have been in the news recently. In 1946 Argentine President Juan Peron imported 20 beavers from Canada to Tierra Del Fuego hoping to establish a fur trade. Unfortunately the beavers have been busy and now seven decades later they number in the tens of thousands and over the years have destroyed much of the land and reengineered the ecosystem more than humans have. So they are now public enemy number one and they are to be eradicated. Part of the problem was that they had no natural predators in TDF. Back in Canada there were bears, coyotes and wolves that kept the beaver population in check. They also introduced rabbits to the area and later the grey fox to keep the number of rabbits under control but if transpired that the grey fox rarely ate rabbit. The zoological consultant was never seen again.

Back in Ushuaia I walked around town which had a fabulous shopping area but it was Sunday so most of the shops were closed. Far more attractive than Punta Arenas, it felt like an American ski town during the summer months. I went in search of an Antarctica t-shirt as I wasn’t convinced Antarctica itself would have the same retail opportunities. I ended up with a load of stuff including another tea towel to add to my burgeoning collection of three. My new saying is “been there, done that, bought the tea towel”.

Back on the ship I decided to have a whinge if anyone asked how my day was to see if I could get someone to say “it’s not the end of the world” to which I could reply “I think you’ll find it is in a geographical sense” but no one did. In the evening I entered every trivia event I could find including famous faces which is like a picture round (in case anyone didn’t get the gist of it from the name) and although I was the only one to recognise Christine Lagarde, I was unaware that Justin Bieber had gone blonde or that Ian Fleming did a great facial impersonation of David Niven, otherwise I would have been victorious. What did surprise me was Fred turning up. He’s registered blind so I would have thought a picture round might not be his bag.