Two stops in Borneo or bor-nay-owe as my American friend says (I’ve been picking her up all week on her pronunciation) the first in Sabah called Kota Kinabalu and the second in Brunei.

Sabah is part of Malaysia and it was so well developed by comparison to the Philippines. It’s all about natural resources but no more bicycle/ motorbike taxis. All very modern with air conditioned taxis. I have to say I much preferred the third world qualities of the Philippines.

Brunei was a real revelation. Muslim (like Malaysia) nestled in between Malaysian and Indonesian Borneo – three nations share Borneo the second largest island in the world for you trivia buffs of which only Brunei is entirely located in Borneo. Brunei has a population of 415,000 and they don’t sell alcohol or cigarettes and there’s no gambling. They also don’t pay any tax and the weekend is Friday and Sunday so Saturday is a work day. Messes up a weekend away.

They are incredibly rich through oil and gas and with such a small population the Sultan pays the people rather than raising money through taxes. It’s like a benevolent dictatorship. Crime is low and there is almost no public transport system so everyone owns several cars; usually three!

We went to visit a water village with houses 20,000 people on the Brunei river (imaginative) which is literally houses on stilts. There are 19 schools in this village which is the largest of its kind in the world. 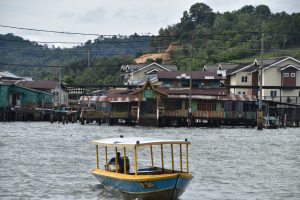 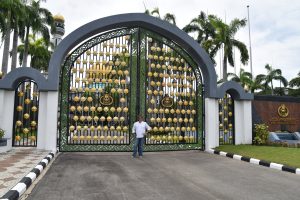 There are no homeless people – if you’re struggling financially you just fill in some forms and ask for more money and its provided. There are only 10 people in nursing homes and the prison only has people we have stayed longer than they’re visa allowed (according to her). Petrol is cheaper than water and if you go to the dentist or doctors the fee is the equivalent of 60 cents after which all treatment is free. If they don’t have the expertise for whatever you need they will fly you anywhere in the world where the treatment is available all expenses paid.

Parents have to pay 23 dollars a year for kids to attend school however when they go to university the government pays the students 300 dollars per month. If they study overseas the government pays everything including a 2000 dollar a month allowance.

I guess they can do all this because the population is relatively small but the place felt soulless and driving around we saw very few pedestrians or signs of life – how I’d imagine North Korea to be. A fascinating place in terms of the contrast with the UK but not somewhere I’ll be buying a timeshare.

So today is a sea day and the sun is shining. We arrive in Singapore tomorrow morning at 8am and I shall be glad to get off despite having a good time thanks to the people I’ve met.

I went to the towel folding demonstration this morning to add to my repertoire which currently consists of a snake! I passed on the origami and napkin artistry although I was curious as to what could be done with a napkin. I’ll ask Ramil.

I bought a drinks package at the beginning of the cruise and I need to drink 42 dollars worth a day to break even. I’ve done my best but I think the cruise line will win. Lightweight Paddy.

My cool British reserve in the casino abandoned me a few days ago replaced with the desperation of a Syrian refugee so last night I just watched other people lose. Very entertaining and it didn’t cost me a penny.

I’m on deck hoping another bellyflop competition with start (can’t believe people are so stupid) but I won last week so I might enter again. Only kidding – I couldn’t compete with some of the lardier guests. There’s one guy who could empty the pool if he entered. It would be like sitting in the front row at sea world.

Next report from Singapore.