I arrived at the Kingdom hotel in Vic Falls at 10am and delightful Irene managed to set me up with a room straight away. Finally I was in a proper hotel. Bath tub, fridge, TV, safe, ironing board, slippers and the real mark of an top class establishment, tandem toilet roll holders. The place was fabulous and it even had a casino which as you understand didn’t influence my decision at all. 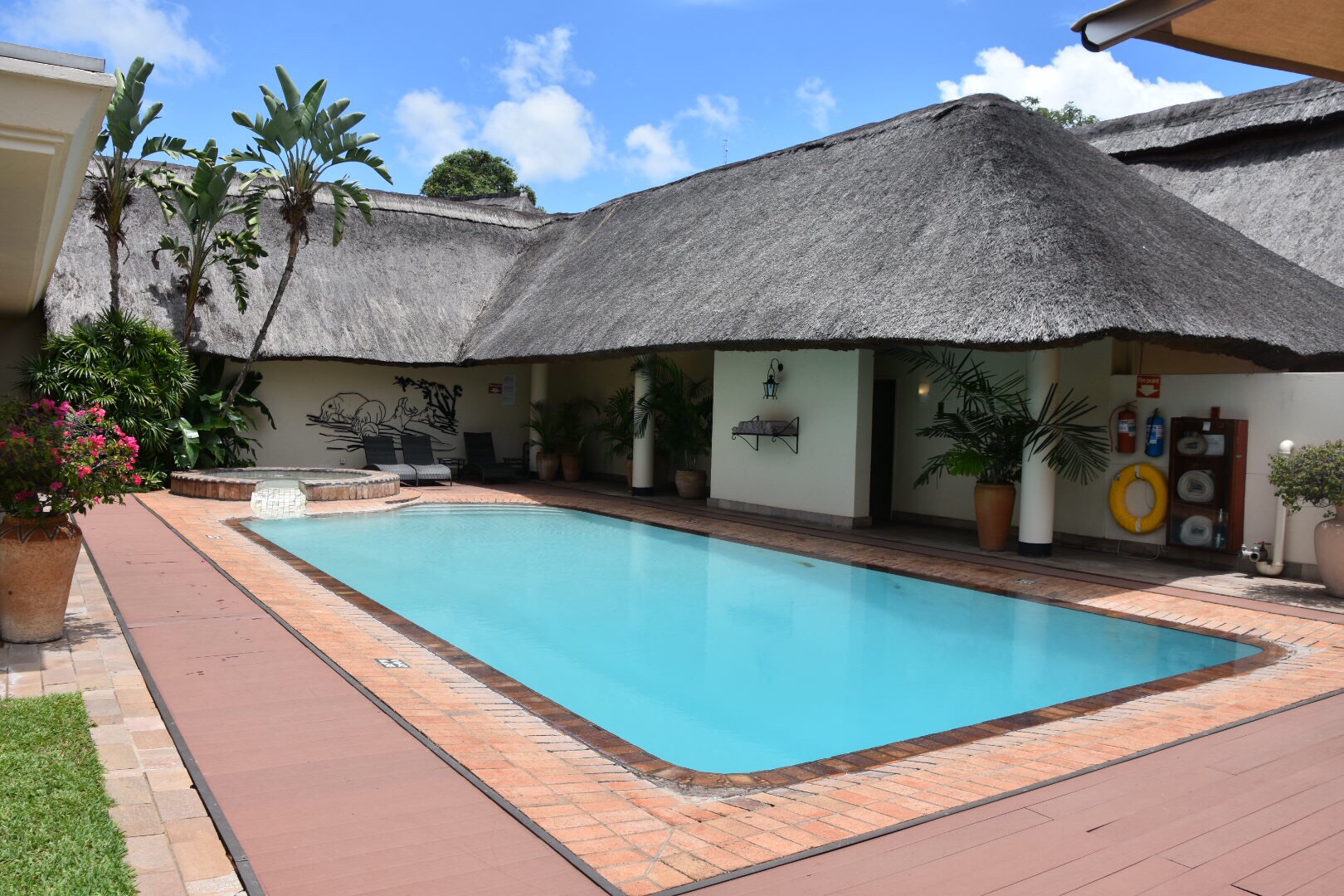 Zimbabwe is another landlocked country in Southern Africa with a population of 16m. The US Dollar is the unofficial currency however other currencies are accepted such as the South African rand, the Euro and of course the Botswana pula. The most common languages are English, Shona and Ndebele.

Zimbabwe was called Matabeleland for most of the nineteenth century and became Southern Rhodesia (named after English colonialist Cecil Rhodes) from 1898 until independence in 1965 when it became known simply as Rhodesia only to be renamed Zimbabwe in 1979. In 1980 a chap called Robert Mugabe became prime minister. That was the end of white minority rule. Mugabe changed his title to President in 1987 (for life) and it has been a downhill disaster ever since. He has only just relinquished power (late 2017) after 37 years.

Now the former Vice President Emmerson Mnangagwa is at the helm despite Mugabe wanting his wife to take over. The first president of Zimbabwe after independence needs a mention because his name was Canaan Banana. President Banana, Mr. Banana, however you say it it just doesn’t convey the gravitas that the title demands. The ruling party is ZANU PF which stands for Zimbabwe African National Union – Patriotic Front. In 2000 compulsory land acquisition commenced where white farmers were forced off their land in an effort to redistribute the land (to Mugabe’s military buddies). Economic sanctions followed and the black “farmers” have been less that successful causing the economy to decline still further.

It is estimated that in 37 years of rule, the deaths of 3m Zimbabweans can be attributed to Mugabe either directly or indirectly. The economy has grown a pitiful amount in that time period from around $8bn to $14bn. The scale of how pathetic that is cannot be overstated. It goes without saying that you could have achieved a better return buying property in North Wales.

On Wednesday I awoke feeling much better. The antibiotics must be working. I briefly thought of my camping buddies unzipping their tents at 5am, clambering outside and fumbling their way through the bushes in the dark to the nearest ablution block for a cold shower, a pee and the use of some highly ineffective toilet paper. The important thing is though, they’re happy just as I was in my extra large double with fluffy pillows and Egyptian cotton sheets.

I’m staying about 1km from Victoria Falls which has to be one of the top five things on my bucket list so off I went dodging the various street sellers. These guys are the most persistent I’ve encountered in my whole trip. “No thank-you sir” seems not to register. I’ve gotten angry with a few of them which I don’t like at all. I’ve also lectured a couple about how they are potentially spoiling a trip to one of the world’s natural wonders. I’m not kidding, these guys are relentless and it’s one after another selling the same bollocks. I blame Mugabe.

Anyway there are various ways to view the falls and the most obvious is in the Vic Falls National Park but I’m doing that tomorrow with the group so I did the bridge instead. The bridge is actually in no mans land between Zimbabwe and Zambia and so long as you’re not going into Zambia you can get a piece of paper which allows access to the bridge from the Zimbabwe customs people. All very simple. From there it’s a ten minute walk through rain which isn’t actually rain but the falls produce so much moisture that it’s like it’s raining. I had prior knowledge of this so I had my rain jacket on. I saw several rainbows which reminded of the quote, “everyone wants happiness; nobody wants pain, but you don’t get a rainbow without a little rain” – Dolly Parton. It’s certainly not the best view of the falls but it is where they do bungee jumps. It was fabulous to see and tomorrow will be even more impressive. 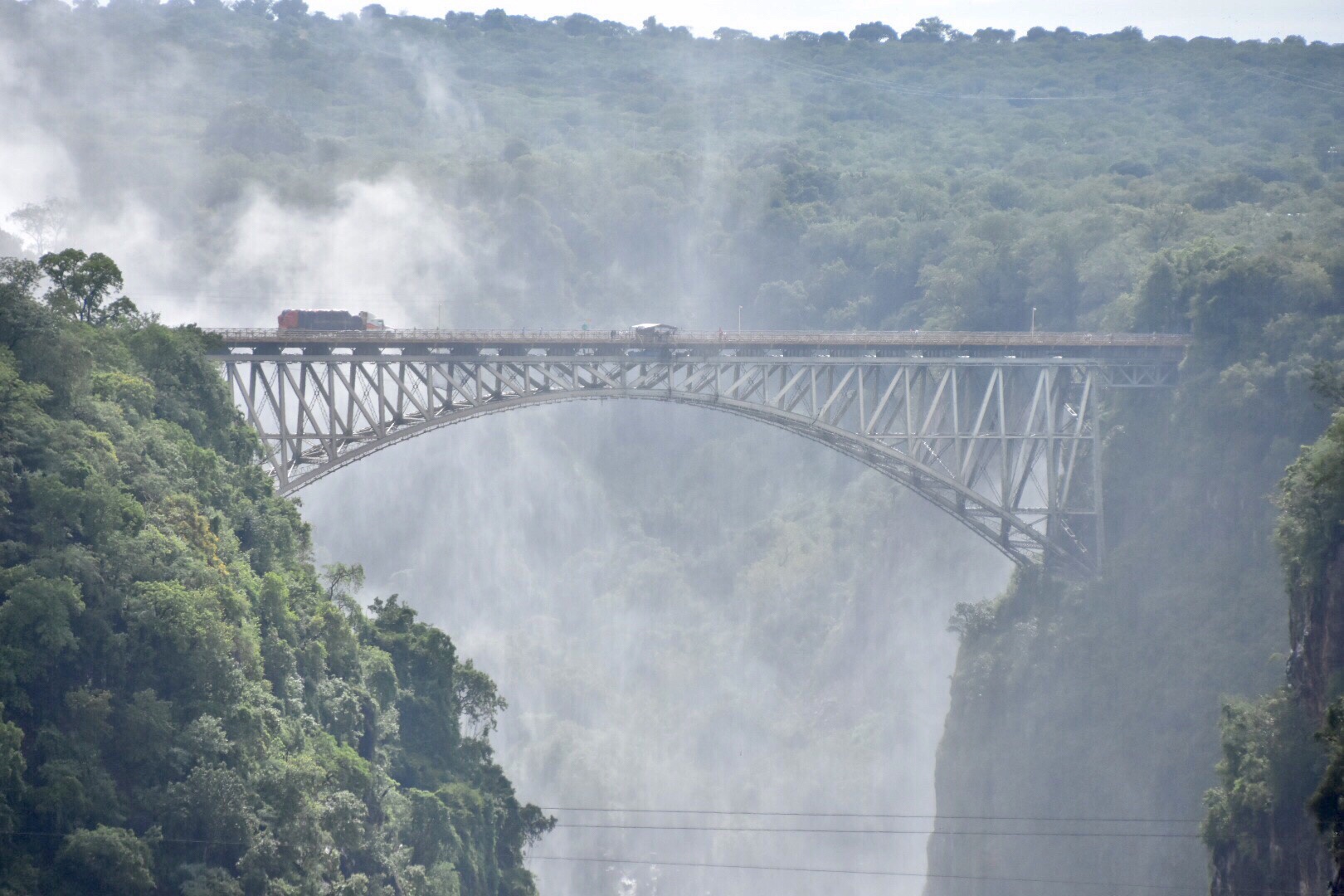 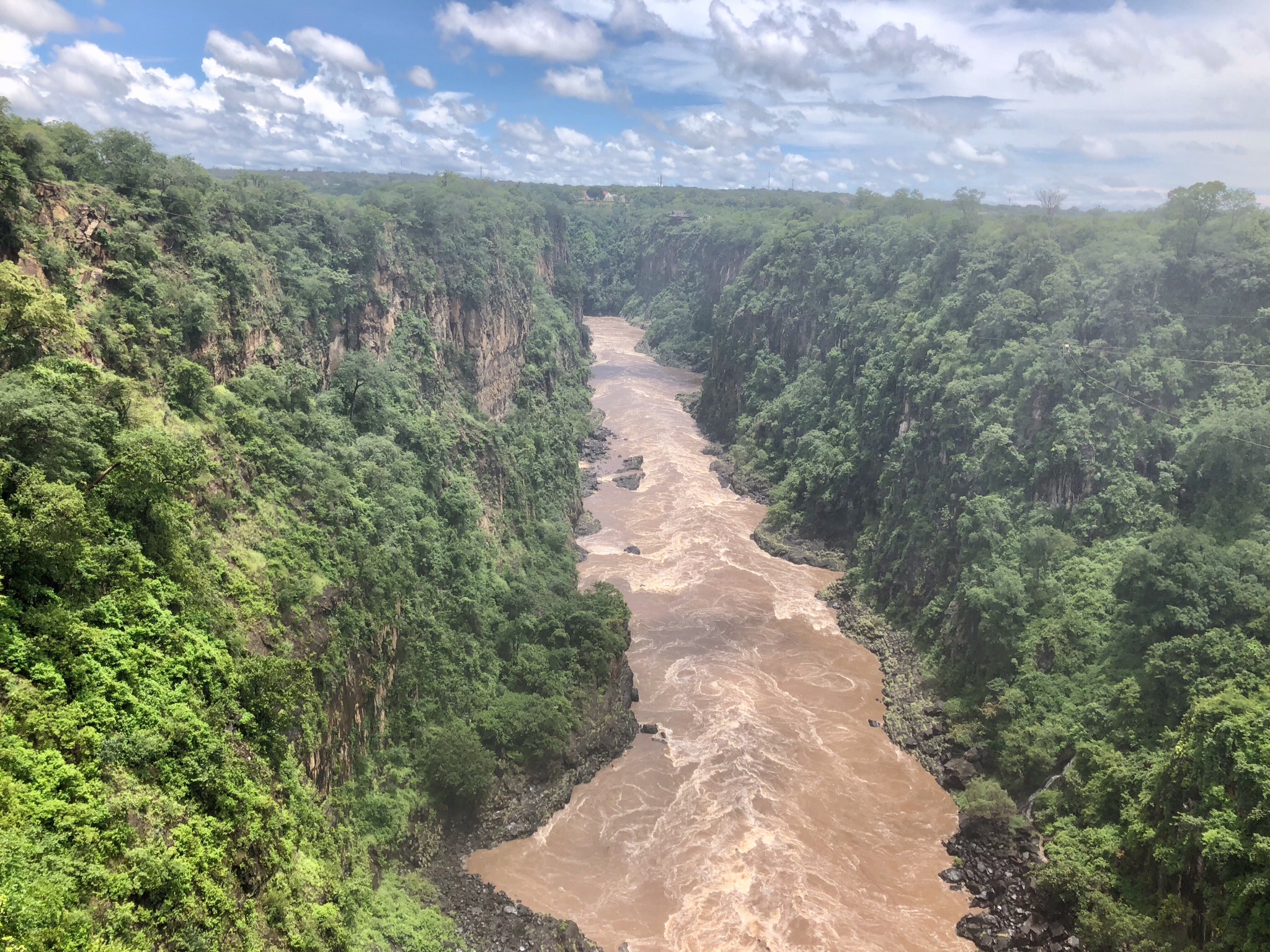 On the way back to the hotel I met some hawkers who liked my trainers and wanted to do an exchange. A wooden giraffe for a pair of Adidas Climacool! I think they were ‘avin a giraffe. I did however take Francis up on his offer of some souvenir Zimbabwe dollars. I am now the proud owner of several banknotes including a 5 Zimbabwe dollar note at the lower end and a 10 trillion dollar note at the top end. That’s 13 zeroes. The largest note was 100 trillion dollars which was worth around 40 US cents. Now I’m no expert in African fiscal affairs but I’d say that something had gone wrong somewhere. People would turn up with a wheelbarrow full of cash just to buy a loaf of bread. As always, at times of hyperinflation it’s the wheelbarrow salesmen who seem to benefit the most. So Zimbabwe adopted the US dollar but didn’t ask the Americans so it’s not official. So how did they get dollars in circulation? They sold mining interests to the Chinese of course in exchange for wads of currency. How Mugabe lasted 37 years is a complete mystery. 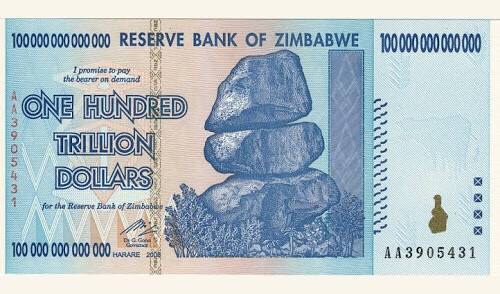 Lunch at the hotel with an overly attentive waitress called Cynthia had put me off going there again. In the evening I tried the casino and it was the saddest casino I’ve ever visited (and I’ve been to a few). One customer and a bunch of out-dated slot machines. I retreated.

On Thursday the highlight of the morning was a baboon entering the large open air breakfasting area and stealing food from a table. He caused quite a stir. He then came in a second time and went straight up to the buffet area and stole three or four apples before making his escape. He was large and quick (and very cheeky). 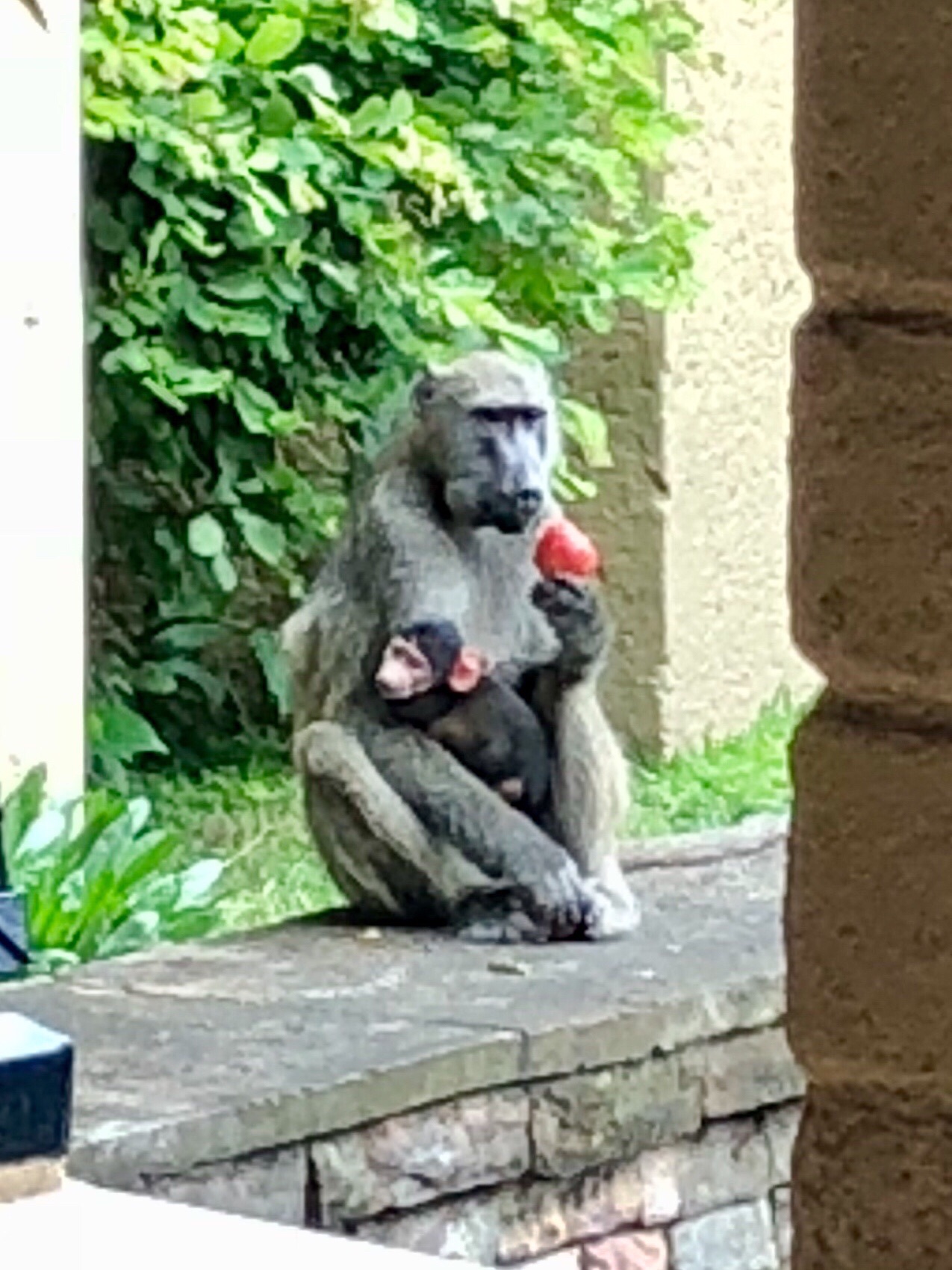 I was reunited with the rest of the group on Thursday and again they said I’d made the right choice. They did a ten hour game drive and saw one elephant. The problem with animal sightings on this trip is the amount of rainfall they’ve had. Too much rain and the animals don’t need to travel to the water holes as there are temporary water holes all over the place. And the grass grows which gives the big cats a place to hide.

We all trotted off to the falls in the afternoon and did the proper National Park tour. Fabulous if only we could see. The vapour produced by the crashing water not only soaked us but impaired visibility. I couldn’t imagine no water cascading over the falls but that’s what happens for five months every year.

Friday was our last day at the falls and it was a free day. Some were going on a helicopter but none had opted for the Zambezi rafting which was most disappointing but I didn’t want to do it alone. So I did a rather sedate Zambezi trip instead with five of the group. It was the most enjoyable river trip of this whole adventure primarily due to them serving free white wine and some hippo sightings. The trip was upstream meaning we were floating toward the falls and the captain showed us a spot they refer to as the point of no return. Hippos have been known to go over the edge. Now that’s gotta hurt.

We had our last supper together which was low key. Some of them looked like they were struggling eating at a table instead of from their laps sitting on child sized camping chairs. I shall miss the group. They’ve been good value.

I decided to mooch around St. Louis before heading off as I wanted to avoid…