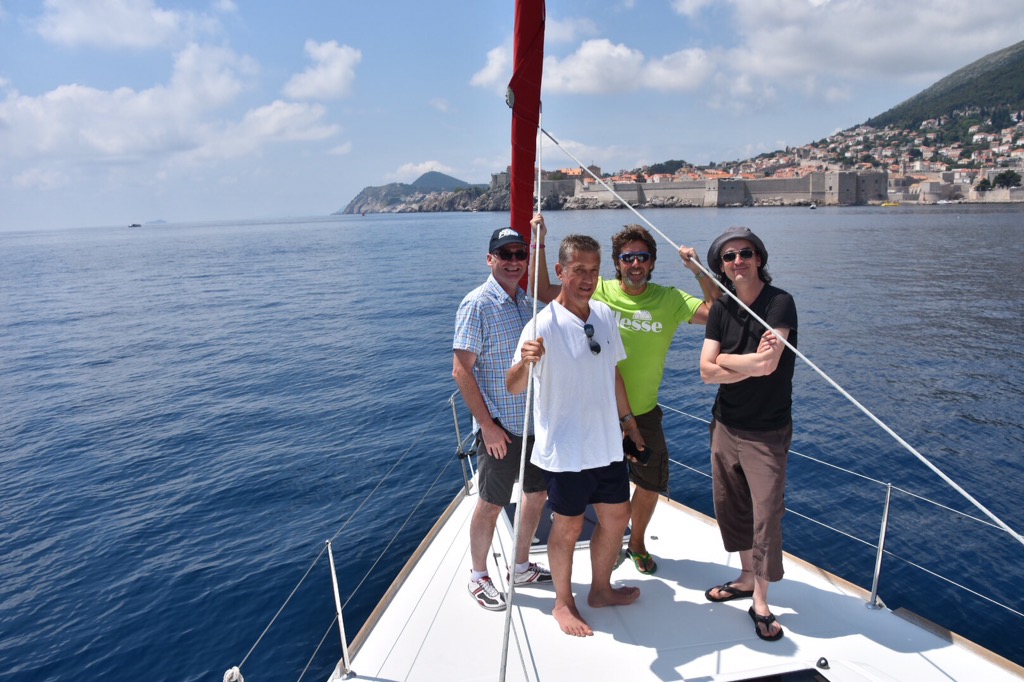 Liaising with the chaps at Dubrovnik airport was seamless and my “hand luggage only” friends and I were on our way to the Sunsail base at the ACI Marina within minutes of them landing. Our boat for the week was a 47ft Jeanneau and we were one of ten yachts on the Wine Flotilla.

We had hired a skipper for the first day to learn the ropes on what was for us a different type of boat and they saw fit to provide us with 20 year old Martina. The poor girl had to put up with us all day so we gave her a generous tip. She was very good and by the end of the day I could park up, Bully could operate the navigation equipment, Jim knew where to find the cleat and Simon had worked out the best sunbathing spots. We certainly felt confident enough to be self-sufficient for the rest of the week. We were the last boat to arrive as we wanted to maximise our time with Martina for a number of reasons; some of them even to do with sailing.

On the first evening we had a fifteen minute walk to a wine tasting event. We partook and bonded with two couples from Shropshire in their 60’s/70’s. Nick and Fran (who met many years ago through Morris Dancing) had their own boat so were quite experienced. Nicest Morris Dancers I’ve ever encountered. We all got a little bit pissed on the wine and the grappa and the evening was a good ice-breaker. In that one evening we were more sociable than the entire holiday last year. The other couple were Brian and Sue and it was Brian’s birthday. He was great fun with a ready laugh and he had a little mischief about him. Sue was the flirty one and there was a very high chance that she’d had breast augmentation although we didn’t ask. Overnight in Sudurad on the island of Sipan.

We were expecting strong winds so we had our daily briefing early and all set off quite sharpish. The first two hours on our own were quite lovely but then the sea conditions changed which caused some nausea amongst my hungover shipmates. Nobody threw up but it wasn’t pleasant for about 3-4 hours with a confused sea and a billowing genoa. We covered 37 nm in 7 hours and ended up in Orebic. Us and another boat were too big for the marina so we had to moor up outside the main wall next to the ferry stop. It was a very quaint town and we ducked out of the wine tasting because it involved a bus ride with the threat of singing. We had a pizza.

The ferry is of great benefit to the town of Orebic and the surrounding islands but for us it was a complete pain in the arse. The last ferry was half past midnight and they resumed again, on the hour at 5:30am with lorries parking up next to our boat from 5:15am. The ferry also created a swell which looked quite harmless from the outside but from the inside felt like being inside a tumble dryer. Then the church bells went off at 6am which in my view is a little early. With foot passengers from the ferry filing past the boat, one old lady on the 7:30am ferry took a photo of me sitting on the deck looking somewhat traumatised by the whole experience. I felt like an exhibit.

We only had a short sail to Lumbardo so we decided to play cards for a few hours. With time on our hands we decided to lengthen our journey and practised our tacking and gibing under the watchful eye of Jim who’d become the self-appointed sail optimiser. Bully took us in to port and it was the trickiest one so far but he did a splendid job.

In the evening we had another wine tasting event and this time I attempted to bond with two American couples of similar age to our Shropshire Morris Dancers. Another great evening drinking wine and liqueurs. It took a while for the Americans to warm up but once we’d cracked the big guy (Rodney) they were our buddies for the rest of the week.

The free sailing day is a boon to most flotilla sailors but not necessarily to the less experienced folk who prefer to be led by the nose (until confidence leads to separation). We’d been given several destination options which all took us back down the coast towards Dubrovnik and we chose Okuklje on the island of Mljet. It was 25 miles away so a long sail with a favourable wind. There was also the “poetry competition” in place of the quiz. At one point in the morning we were bobbing along having a wonderful time in beautiful sunshine listening to Only Yesterday by the Carpenters on the deck speakers. Bliss.

We were alternating between wind only and wind assisted until our engine decided not to start again. We had a little wind in the sails so we could make progress but we wouldn’t be able to dock without engine power. I radioed our lead boat to inform them of our problem. Four Englishmen sailing out of control and unable to dock. I mean it wasn’t the dramatic tension of Apollo 13 but it was certainly la catastrophe du jour.

So two hours later the lead boat found us and engineer Bruno boarded us and began his diagnostics. We’d reached the entrance to our stopping point so we stalled the boat and then we were just bobbing being slowly pushed towards the rocks. Nervy moments as Bruno got the engine going manually only to turn it off again to see if it would start on its own. It didn’t. We were drifting again. Bruno needed to dismantle the engine panel. After a few minutes Bully suggested we might want to dock first rather that drift closer to the rocks. Bruno agreed. He got us going and we parked up, hopped off and left him to it as we went for a beer. It took another two hours to fix it.

Okuklje had a few restaurants and a few homemade pontoons that belong to the restaurants. The idea is that if you use a pontoon, you should eat in their restaurant. We obliged and ate at a pleasant enough place but the service was lacking. Uncle Fester was the hired help and his delivery of the drinks to our table was truly unique.

We awoke yet again to beautiful sunshine – I could get used to yacht life. We had 25 miles sailing to Dubrovnik so long as it was a straight line. It was an uneventful last leg and we arrived back at base around 3pm, a whole day early due to a wind related change of plan. Docking was a bit hairy as the marina at Dubrovnik was full of expensive craft and I’d had a few liveners. Well, it was a wine flotilla. I managed to glance a brand new 45ft catamaran but no damage was caused.

We awoke in Dubrovnik Marina for our last full day and we had already decided a day in Dubrovnik old town was our preference. Simon and I were tempted by the Dali exhibition. Hmmm. 8 euros wasted. That’s the last time I choose the cultural option. Having been there a week ago I felt like a tour guide and we mooched around, then did the city walls followed by a pizza. In the evening the crew from all ten boats gathered for the last hurrah and prize giving. Strangely there was no award for most flaky, amateurish, juvenile, middle-aged men so we missed out. The poetry competition winner (he had to read it out) was won by a pro. Our limerick containing the words anchor and tanker wouldn’t have stood a chance.

Overall, despite high expectations, the chaps and I enjoyed Croatia more than Greece due to a multitude of reasons – better boat (we prefer monohull), slightly nicer scenery, great support staff, pleasant fellow sailors and more confidence in our sailing abilities. It’s been a week of sunshine, laughter and various types of wind. We’ll go again.