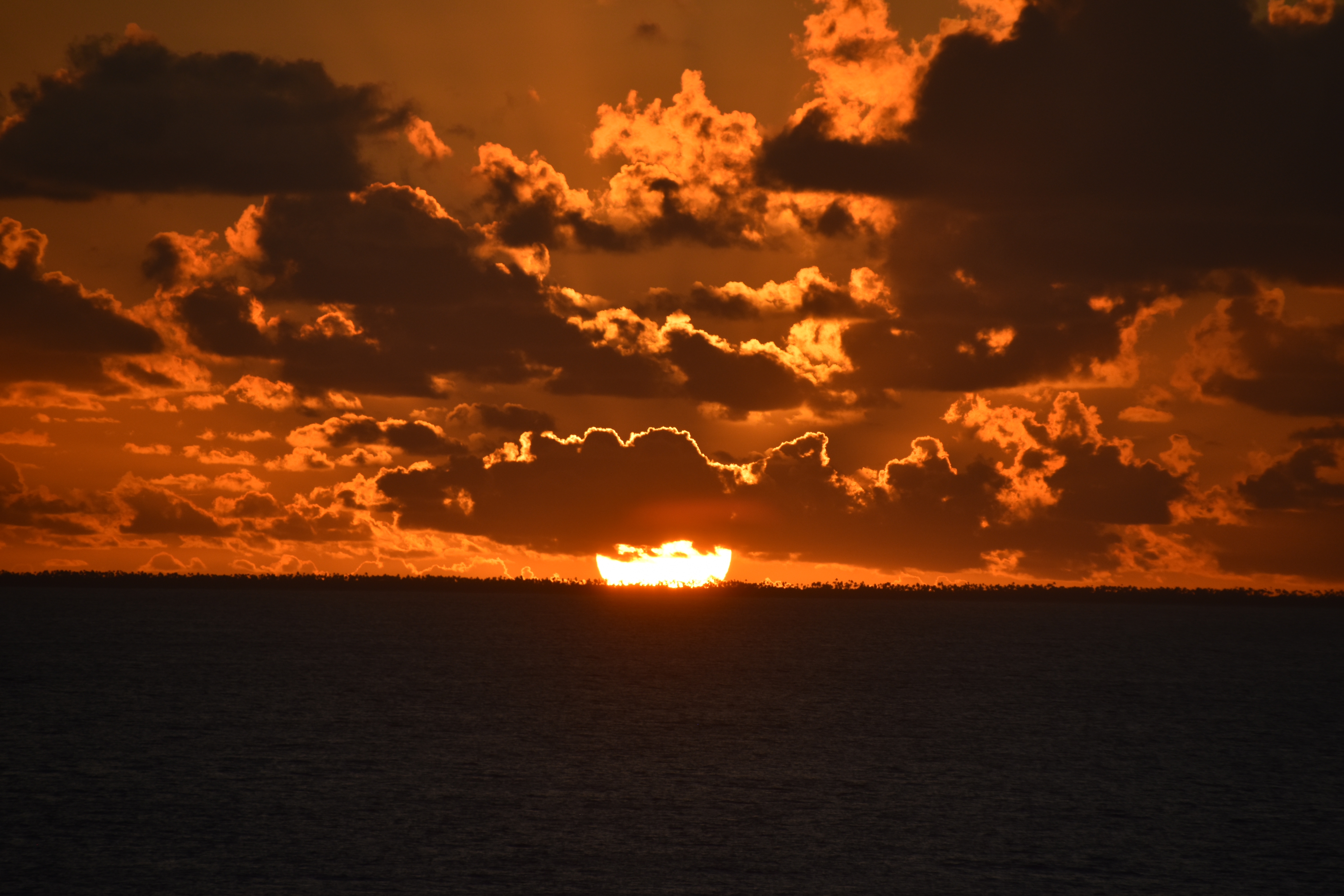 Today we reached our first Pacific island, Nuku Hiva in the Marquesa Islands of French Polynesia. I’d almost become so used to being at sea I wasn’t sure I wanted to get off.

During the first few sea days I thought I’d learn how to play bridge which is basically whist with a partner and a curious scoring system. The first lesson was basic to say the least. They were talking like we’d never seen a pack of cards before. I lasted two lessons and picked up enough to realize why I don’t play bridge. Too formulaic in terms of hand assessment, bidding and the communication process. There have been some heated arguments during the bridge games and the word on the deck is that there was even a fight. Aggressive bunch these bridge players. Bruce at our dinner table says he gets no such trouble at his watercolour class.

The sun has been rising at around 4am and it’s pretty warm by 6am. Most days are in the high 80’s with a little rain here and there. We crossed the equator a few days back and I was expecting a big event – balloons, champagne, canapés, bunting, trumpets. None of that – just a junior officer with a short announcement. I hope they do better for crossing the dateline.

There are two daily lectures and the chaps have been on since Fort Lauderdale doing 12 lectures each. They are being replaced in Tahiti as I guess they’ve run out of topics they can talk about. Milt is 79 and his subjects have been around things like Columbus, sailing round cape horn and other nautical favourites. His style is quite refreshing. If anyone tries to correct him he just shrugs his shoulders and says “I don’t care”. He’s got a point. 79 years old on a free cruise with his wife. He doesn’t care.

George on the other hand takes amateur to new depths (nautical term). He commits the cardinal sin of “reading” his slides. He talks about giant squid, trenches and other oceanic topics. I think the deepest part of the ocean we’ve been over is 16,000ft which is a bit of a MF. The deepest in the world is the Marianas trench near the Philippines at 35,000ft.

A weird phenomenon of cruise ship life is the pockets of friends you accumulate for the various activities. Casino friends, trivia friends, dinner friends, paddle tennis friends, bar friends, poker friends, pool friends, people you always seem to bump into on the stairs friends, needlecraft friends. And people you don’t share activities with you may never meet.

To give you a taste of the activities onboard some of the events in the daily listing include two trivia games, various keep fit classes aimed at those with plastic body parts, there was a vegetarians and vegans meet (I liked the irony of that one), a wii bowling event every day, a towel folding competition (my python came second), learn how to play the ukulele, various games and of course casino tournaments. For anyone who hasn’t witnessed a slot tournament put it on your bucket list. One of the funniest things.

I’ve entered the $60 poker tournament twice and came last (or 10th as I prefer to call it) twice. Next time I’ll just turn up and hand over my money.

The evening entertainment has been enjoyable and I haven’t nodded off yet. I missed most of them on the last cruise but Karla can be quite persuasive. Aside from the marionettes and the harpoonist, we’ve had a comedian from Hawaii called Kermet, a married couple who did a mind reading show which was slick but they didn’t fool anyone. A saxophone player from Northampton – tall, blonde, great pair of lungs and Jack Pack from Britain’s got talent doing their first cruise ship. A very nice bunch of lads.

My favourite were dance trance – an Australian/ New Zealand duo and it turned out that they had stayed in my flat in Waylands Mead for a couple of weeks back in 2011 because my tenant at the time was Julian’s sister Natasha.

An update on the chap with cowboy boots. He’s from Texas so in essence he’s wearing the national costume. Texans include “smart jeans” as formal attire.

In my search for the most psychologically disturbed person on the ship, no-one has yet eclipsed the woman who has brought a life sized stuffed dog for companionship who watches the sunset with her every night. Not spoken with her yet…