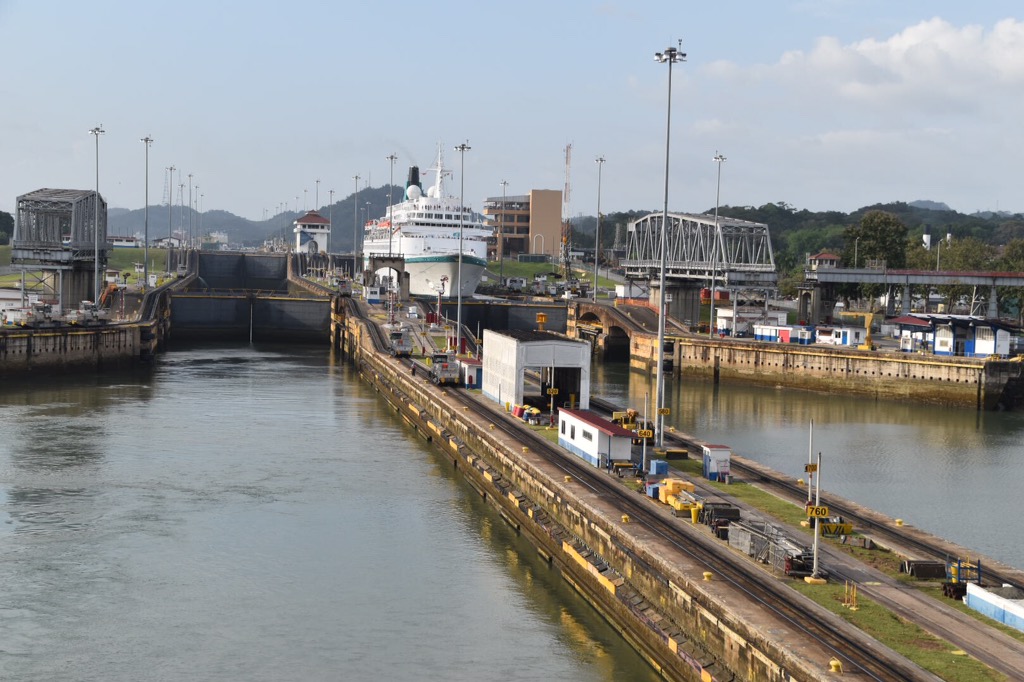 The first stop of about 30 port calls was the Isla de Providencia which is an island belonging to the San Andres group of islands in the southwestern Caribbean Sea which in turn belong to Colombia. Throughout history the islands have been ruled by Spain, England and even the pirate Henry Morgan. It is rumoured that some of his treasure is still there although looking at the state of the place I don’t think they’ve found it yet.

Spreadsheet Julie had organised a private snorkelling tour so I joined the group and eight of us went for a snork. Our captain was called Minibar and I didn’t understand a word he said during his running commentary. From the inside his boat looked like if was made of polystyrene with a tarpaulin bimini but we didn’t sink and had a fun few hours on a small island which was specifically set up for snorkelling. The tiny round island had a diameter of about 100m.

The second stop was the aptly named Puerto Limon in Costa Rica. I stopped here last year when Karla and I visited a Banana plantation. I’m not sure why I gave banana a capital “b” just then but it’s staying because they’ve played a significant role in my life. Puerto Limon rivals the Norwegian town of Honningsvag for the Carbuncle Masquerading as a Town award. It is truly ghastly and my search for a redeeming feature yielded nothing. As I turned each corner I was hoping to find something: a monument, a church or cute little cobbled street but alas there was nothing worthy of a digital photograph (which takes some doing because I’ll snap any old crap). Even the park and beach area were amongst the worst I’ve seen and this from a man who’s been to North Wales. I can only assume that the town planner is still serving time for crimes against concrete.

I lasted about 40 minutes in the town and on the way back to the ship I was accosted by a taxi driver called Mark Anthony who persuaded me that we should go on a tour. I was rather keen on doing bananas again only this time taking a video with the go pro of the man running the bananas out of the jungle. First we drove a little further down the coast to a place called Cohuita which was a beautiful beach resort. Most of the beach resorts are on the Pacific coast where it is far dryer than the Caribbean side which has around 200 inches of rain per year. On the way back the banana plantation was closed as it was the weekend so I spent an hour and a half in a taxi with five minutes taking photos on a beach for the princely sum of $80. I won’t be marking that one as “value for money”.

We talked about Costa Rica’s 6 million people (in general not individually) and that the country has no army. One interesting fact he did tell me was that the banana tree which takes nine months to grow from start to finish becomes barren after producing just one bunch, albeit a rather large bunch and has to be cut down and a new one planted.

The cruise ship season is about six months long and with 80 ships due in PL Mark Anthony had a pretty good idea about demographics on the various cruise lines. Carnival have the youngest passengers and he confirmed my suspicions that Holland America have the oldest cruisers. He suggested Princess might be more up my alley to which I suggested he leave my alley out of it. He had worked on cruise ships for ten years when he was in his twenties.

He went on to say that Costa Rica was the most corrupt country in the world and of course I didn’t believe him so I googled it and read the top 10 list to him which ended with Somalia at number one and didn’t even feature Costa Rica. Then he tried to convince me that Belize wasn’t part of Central America and I suddenly realised that he was lacking somewhat in factually correct information. So we talked about the backsides of Caribbean women instead in an effort to put an end to the complete piffle.

Following on from Costa Rica was our transit through the Panama Canal which took about 12 hours from the Cristobal breakwater to the port of Balboa on the Pacific side. Vasco Nunez de Balboa was a Spanish explorer who was the first European to cross the isthmus of Panama and reach the Pacific Ocean, known then as the South Sea. When he finally reached the other side as some kind of ceremonial gesture he walked into the water holding a sword in one hand and a flag in the other and claimed every land it touched for the Spanish Crown which in those days was perfectly acceptable behaviour for explorers and conquistadors alike. In fact, if you didn’t claim something for your homeland you were considered a wuss. In the end Balboa fell out with a few people including the king and was beheaded however he was important enough in history to have the currency, the Panamanian Balboa named after him. A few years later in 1520 Ferdinand Magellan renamed the South Sea the Pacific Ocean because of its calm waters.

During our transit the weather was hot and sunny with many passengers watching from the various decks taking in the extraordinary scenery. All in all a goodly day except for the passenger offloaded at the first lock in the early morning. We were all rudely awoken at 3:30 am with a medical emergency announcement. Of course then everyone wants to know who it was so the guessing game begins. I plumped for a chap at breakfast the day before who was choking on his Rice Crispies but it wasn’t him.

So we are now in the Pacific Ocean sailing south and the next port of call is Manta in Ecuador.