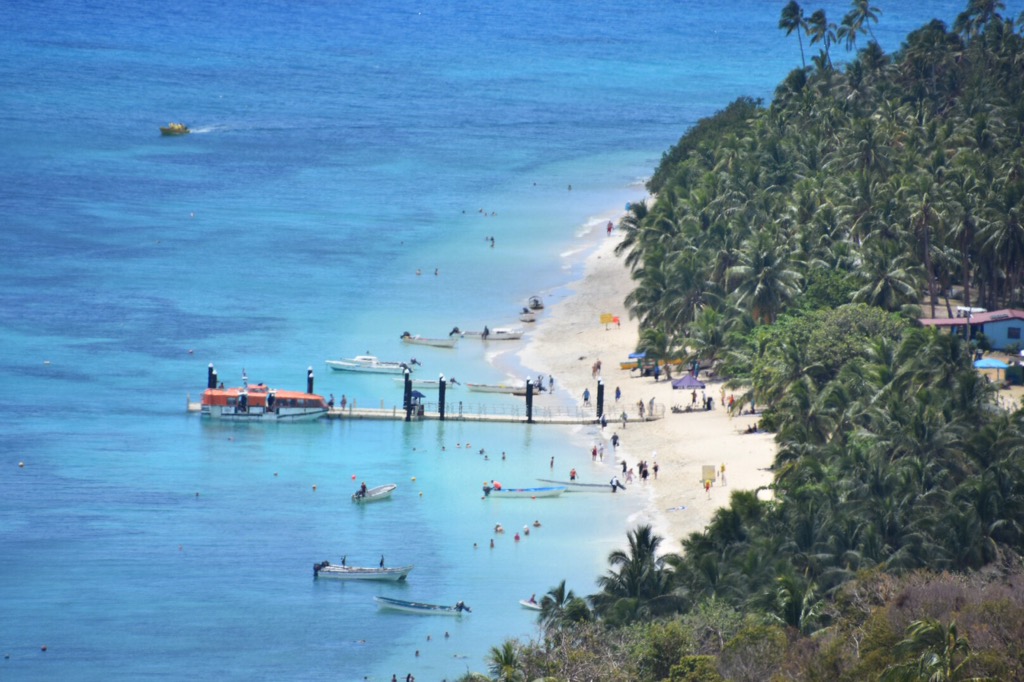 Lying just 71km south of Suva was one of the smaller inhabited Fijian islands called Dravuni Island with a population of just 125 and an area of 0.8 square km. Tiny. No roads, no cars, no multiplex cinemas.

We were tendered ashore which normally involves getting a tender ticket for an assigned time but for the first time as a four star mariner I could take advantage of the “no ticket required”. I’ve arrived!

It was the perfect South Pacific island. Linda and I went ashore and set up for some snorkelling. Then for a massage on the beach and I have to say it was the most tame massage in the history or skin rubbing. It was like extended sunscreen application as she was talking loudly to her friends and shouting at her kids. At one point I sat up and asked what was going on. I’ve had more relaxing rollercoaster rides. I reluctantly paid her.

Linda and I hiked up to the highest peak on the island some 400ft asl from which there were some magnificent views. Back on the beach we spent several hours in the water before being taken back to the ship. Fabulous day and wonderful island. Wouldn’t recommend the massage though.

Ship life is going well. I’ve been frequenting the sauna on a daily basis and met a number of sauna friends. Some are interesting, others are old windbags and some need to wear more clothing such as Ian the Akimbo Aussie. He’s married but that doesn’t seem to stop his repressed homosexual tendencies surfacing. Not with me I hasten to add. I look him squarely in the eye! Of course I’m the picture of heterosexuality with my orange shorts and boofy hair. Maurice (hairdresser pronunciation) is also married and misbehavin’. Then there’s Daniel the Italian who was one of the top downhill skiers in the world in the early 1980’s. Since then he’s been on a high fat diet.

A ship character I have to mention is Chuck. My mistake was stopping and asking what he was doing with his tripod. I should have known not to trust someone who wears trousers that convert to shorts. Time lapse photography is a lonely pursuit which tests the patience way beyond anything I’d consider normal. Chuck is a sweet chap, definitely on the spectrum and desperate to find a photography protege. He’s on the ship with his wife, her sister and his brother-in-law and I get the feeling that they don’t quite understand just how stimulating TLP can be. I must have shown a scintilla of interest which Chuck latched on to. In truth I felt mild concern halfway through my opening line of “hi, what are you up to?”. After out initial half hour together he was keen to meet me and show me what he’d achieved with his first attempts. We’ve met several times since and I always give him a small window before trivia so he’s got a time limit. I feel I could lose hours if not days if I didn’t. If only I’d seen the trousers first.

Only two weeks late...A day after moving in to our new house in Florida we…

Having to leave the US every 90 days is proving to be a real chore.…