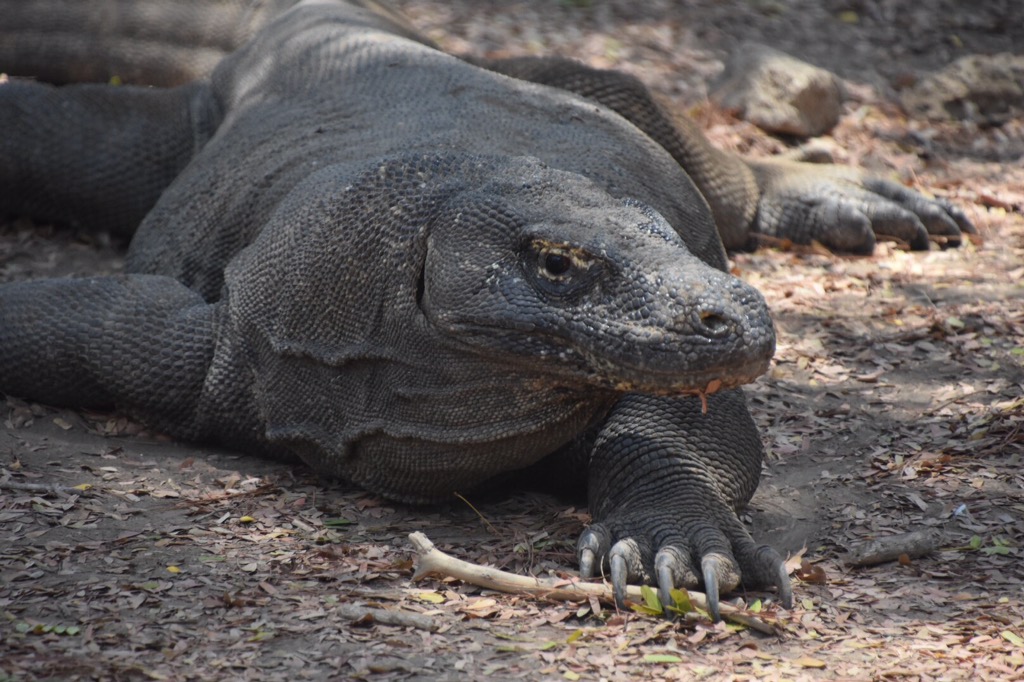 Komodo Island lies just 8 degrees below the equator and is famous for its large lizards but it could be equally famous as the sweatiest place on earth. It is one of the 17,508 islands that make up Indonesia which in days gone by was the Dutch East Indies. Komodo is in the Lesser Sunda island chain and the whole island is a national park. For some reason this meant that if we were not on a tour, we couldn’t leave the ship so 600 of us bought a ship tour. Ben, Astrid and I had bought the $90 1.5 hour trek to see the dragons and we chose the last slot because it was the hottest and sweatiest and we just weren’t thinking straight when we booked it. As we started our trek we saw a woman being carried out on a stretcher but sadly it was due to the intense heat rather than a lizard attack (which would have been quite exciting for everyone but her). The actual walk would have taken about 15 minutes but our local guide stopped at various trees to explain their significance. We finally got to see the dragons; six of them just lying in the shade and we were instructed not to get closer than 5m. Fine by me. Our only protection from a slow and painful death was a short bloke with a stick. Not an ordinary stick mind. This stick had a v-shape at the end which made all the difference. We felt safe.

The Komodo dragon is the largest lizard in the world growing up to 3m long. They can be found on only five islands and their total number is around 5000. On Komodo there were 1300. They eat once a month and consume about 80% of their body weight. They hunt by biting the animal and waiting a day or so for the venomous bacteria to paralyse or kill their prey. Their sense of smell helps them to locate the dead animal. Their cannibalistic nature means that mothers will eat their newly hatched young so baby lizards have to hide to survive. As a result they spend the first two to three years as tree dwellers and eat whatever comes their way.

I’m glad I’ve seen them but I cannot claim it was the most exciting 90 minutes of this trip. They didn’t exactly put on a show for us. It also wasn’t what you might call value for money either. The best part of Komodo was having a cold beer with Ben in the beach bar. Anyway it was nation number 62 and we’re four out of four for music trivia.