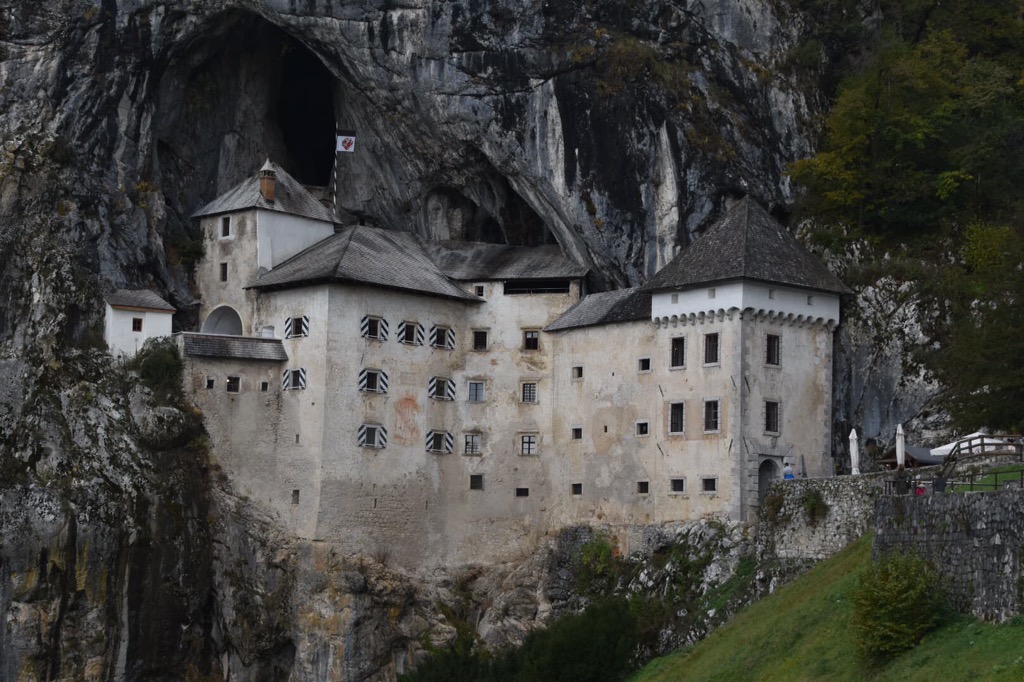 Slovenia lies at the top of the Adriatic and is the most northerly of the six or 7 former Yugoslavia regions. Kosovo would be the seventh but it is not recognised by the UN and is claimed by Serbia despite a desire for independence.

We disembarked the ship at our usual time of 10am and Susan, Brenda and I hooked up with Harry and Darlene and took a tour to a famous cave called Postojna. Slovenia has 10,000 caves and also lots of bears which reminds me of a song. There was half an hour to kill before the bus tour started so I headed to town for a whistle stop mooch. I was glad we’d booked on a tour because Koper didn’t seem to have a lot to offer.

Our minibus first took us to Predjamski Castle which must have featured in a movie at some point. Built into the rocks it was quite stunning but our ticket didn’t give us access so we had to admire it externally. A quick ten minute photo stop and we were off to the caves of Postojna.

The cave system covers 24km and was truly amazing if you like that kind of thing. Our group DID like that kind of thing and I could almost smell their appreciation. The tour was by train due to the sheer size and our lovely guide told us that the dripping calcium carbonate responsible for the creation of stalagmites and stalagmites has a growth rate of 1mm per decade which I think you’ll agree qualifies as slow growing. She pointed to one no bigger than a 4ft stick that had apparently been growing for 10,000 years (although she offered no proof so I was a bit dubious). For the walking section of the tour there were well over 50 of us in our group so instead of shuffling along listening to noisy kids I plopped on my headphones and went ahead. It was like having the place to myself and led to an enhanced experience that would normally come at a hefty price.

At the end there was a fabulous gift shop still within the caves that I popped in to warm up and what was possibly the nicest lavatory I’ve ever utilised within a cave system. In fact I’d go as far to say that if they had awards for restrooms within limestone cave systems if would be in with a shout.

On the return trip our guide Norman (a good traditional Slovenian name) took us on a drive-by of a stud farm (curious) and then crossed the border into Italy to drive around the city of Trieste (not sure why) which meant we missed the 4pm quiz.

Slovenia has around 2 million people and just 29 miles of coastline, one of the smallest in the world at number 147 of 153 that have a coastline. The UK has the 12th longest coastline in the world. There are about 43 without any coastline or landlocked and two double landlocked. I’ll stop talking about coastlines now. Of course the largest country without a coastline is Kazakhstan.