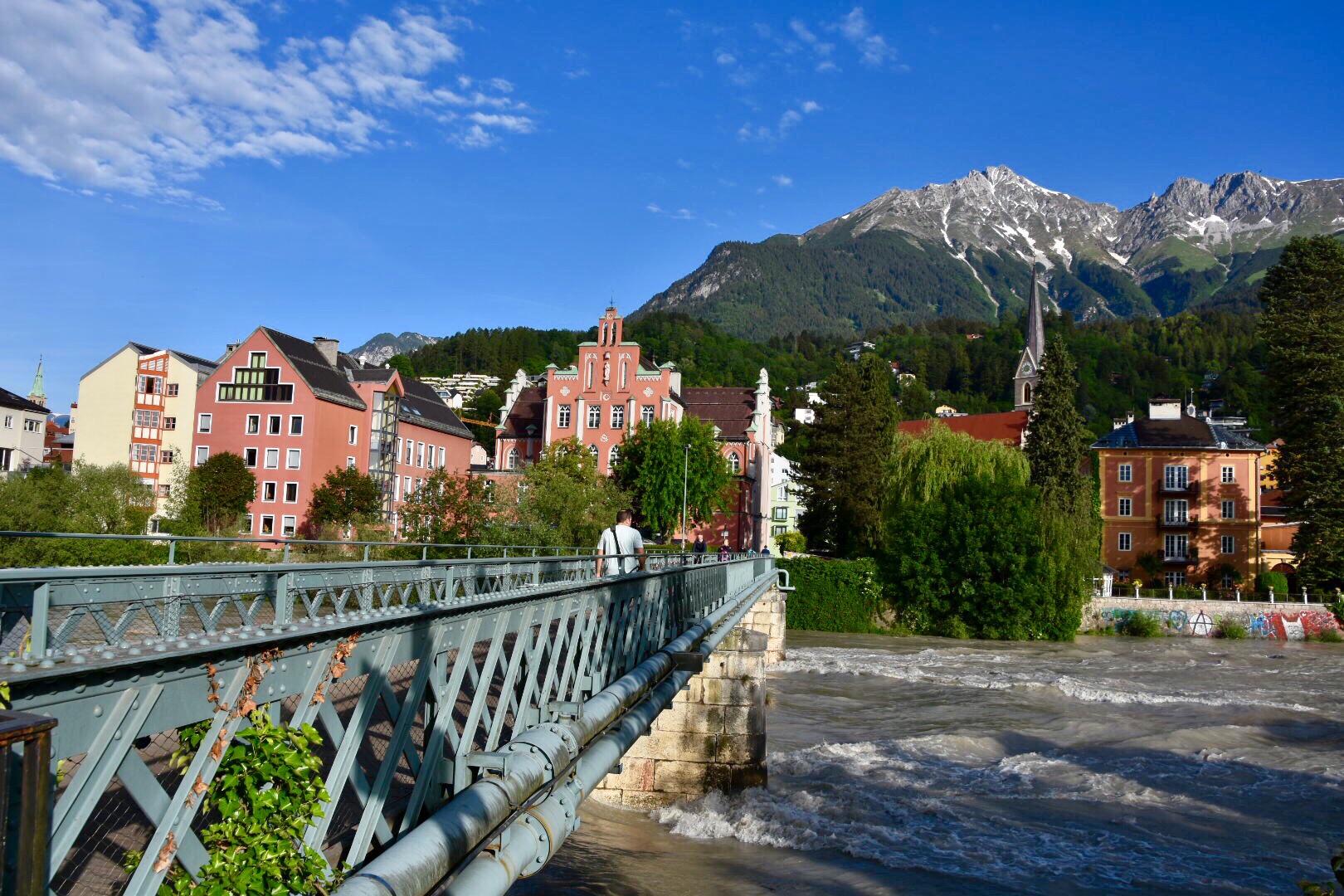 I left at 11am after searching for ten minutes for my car in a small underground car park. Apparently I was on the wrong floor. Prior to that I’d spent a few hours walking around the outskirts of a retail park which I can assure you was more exciting than it sounds.

Within minutes of leaving I was in the Slovenian countryside heading towards the Austrian border. The scenery was fabulous as I climbed to 3500 ft (in the car of course) and then after going through a mile long mountain tunnel the Austrian border was in front of me. An Austrian guard was there and I was the only customer. A very nice young man who could have easily been in The Sound of Music. Far too friendly for his line of work. The road was the E652 and I thoroughly recommend it.

This drive was just as good as the Adriatic Highway and I felt privileged to be driving it on a sunny Sunday in late May. I was stopping whenever I could to take a photograph of the views. I was heading for a small Austrian town called Winklern which marked the start of the 107 otherwise known as the High Alpine Road or the Glossglockner. I’d researched this one and it was the highlight of the whole drive.

I wasn’t sure I was going in the right direction but the scenery was so lovely I didn’t really mind if I was a bit off track. I finally reached the town or Winklern and it wasn’t really a town at all. More like a hamlet. A few houses, a barn, a farm a tractor and in the middle of nowhere. I’d driven to Winklern but not the right Winklern. Obviously a popular place name in Austria. I was 100 miles and two hours off target. I’d like to say it didn’t matter but it did. In the end it was another 7 plus hours driving which was about 2 hours more than I’d like. 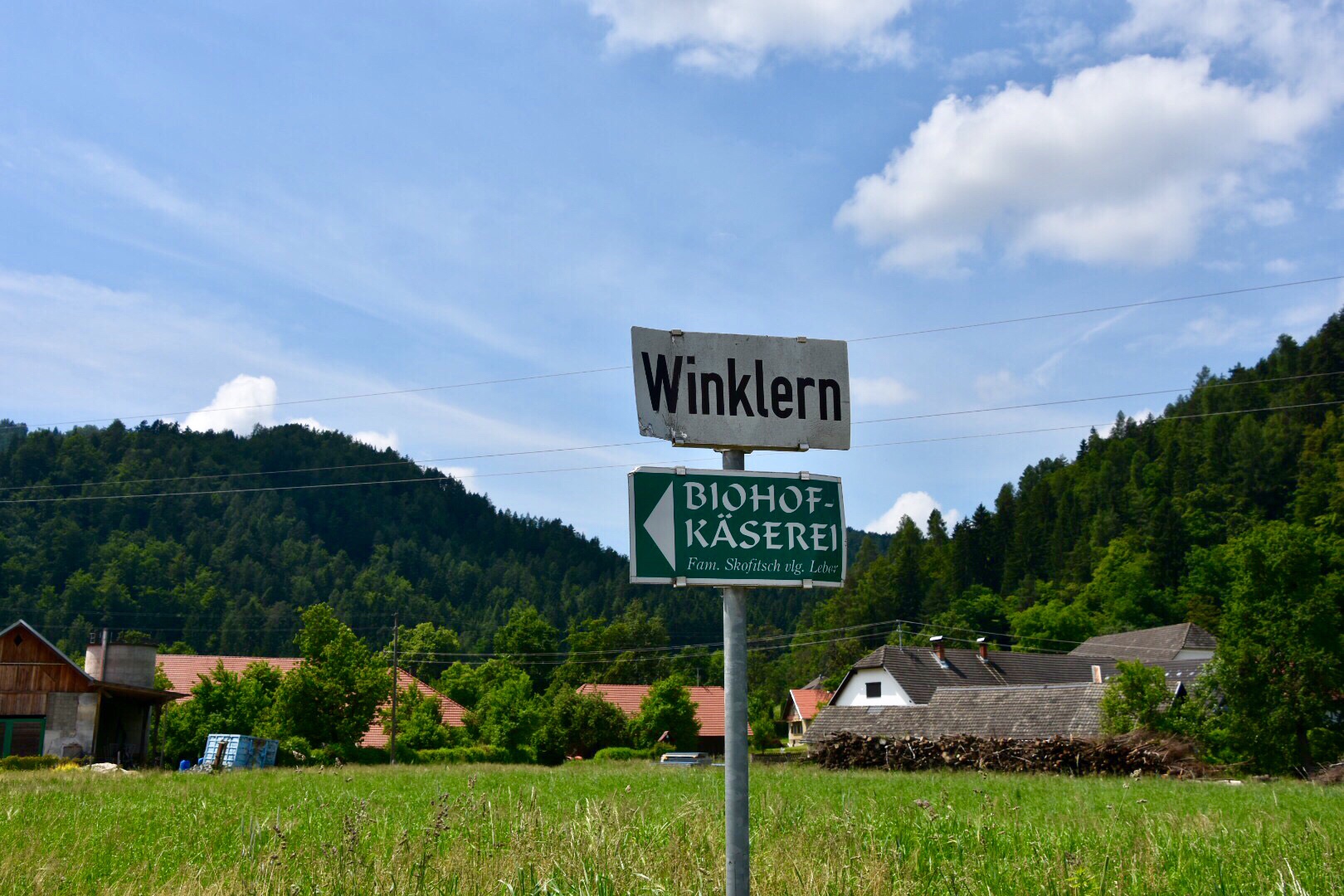 When I arrived at the correct Winklern the weather had worsened and driving the High Alpine Road was going to be tricky with poor visibility so I decided to head straight for Innsbruck. 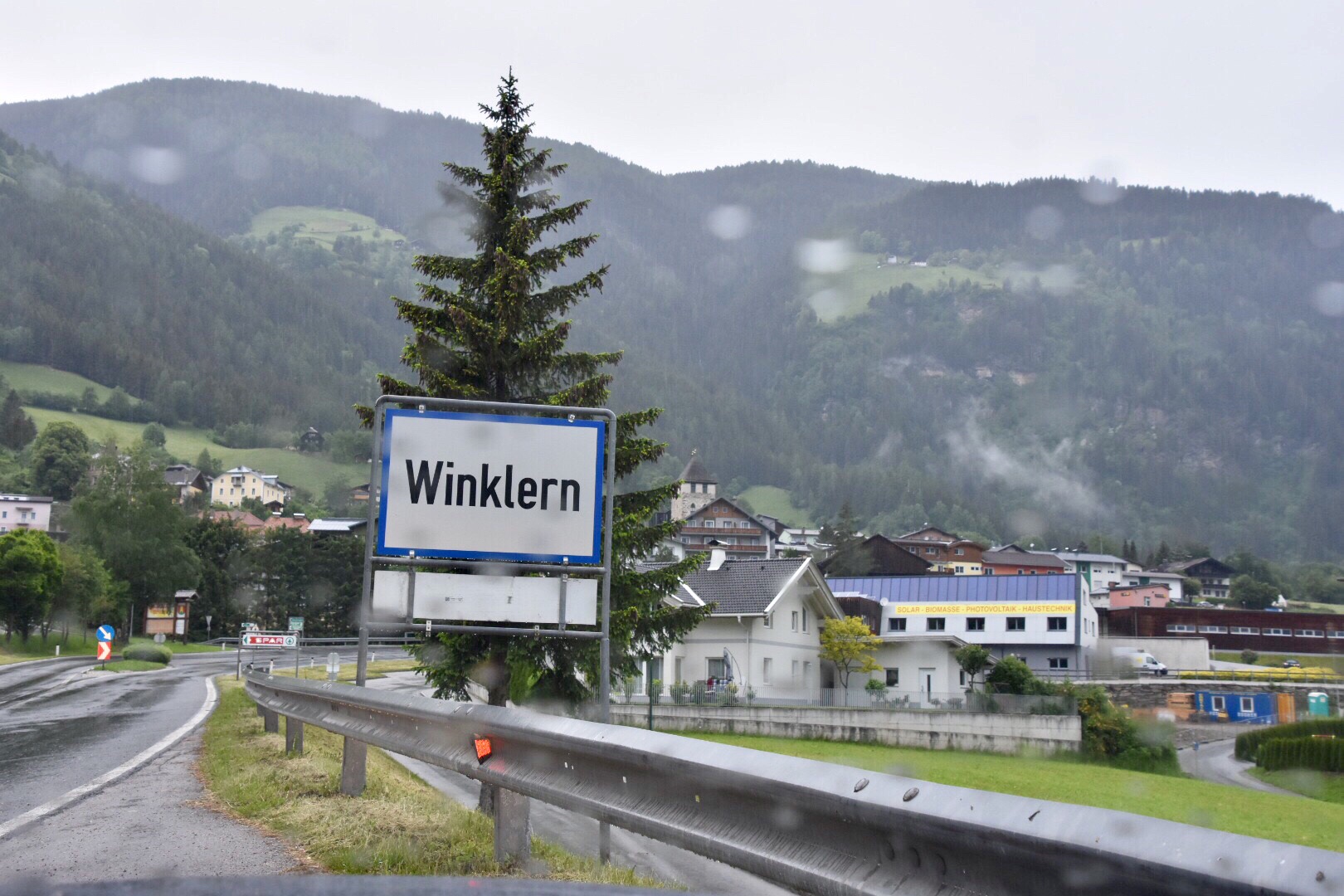 An hour later and by accident I crossed the Italian border and remained in Italy for about 90 minutes before crossing back into Austria via the Brenner Pass which is a mountain pass through the Alps. It had been a day of visual sensory overload. The last time I experienced that much visual stimulation was when I took a wrong turn and the local swimming baths. Magical.

I had to pay to use the Brenner pass both sides. The Austrians wanted ten euros but the Italians only asked for €2.90 which really wasn’t worth the contortions I had to perform to get the ticket and pay the toll. I’d of paid double for him to come round my side of the car.

I arrived in Innsbruck at around 6:30pm and Heidi checked me in. I like Innsbruck but I thought I might. In a valley 1900ft asl and surrounded by mountains.

One thing I did notice driving through Austria was the number of wooden houses/cabins high up in the mountains with no neighbours. These people like solitude. They must have more hermits than any other country.

I had dinner out and after rejecting an Italian which was as hot as hell I settled on a Mexican with random service so no tip, again. I’m doing this no tip thing more and more. It’s quite fun.

Monday morning I was up with the barn swallow (when in Austria) and out nice and early. I rode the funicular to the cable car station and then the first cable car up the mountain at 8:30 to a height of 6250 ft. We couldn’t go the last stretch because it was broken. Call me a wuss but I’m always happy not getting on a broken cable car.

The views from the top were fabulous but it was a little chilly up there with some snow still on the ground. But I’d beaten the crowds so it was a pleasant experience. The cable car route cut a swathe through the trees and as we ascended there were a number of people hiking from 2800ft to 6250ft. 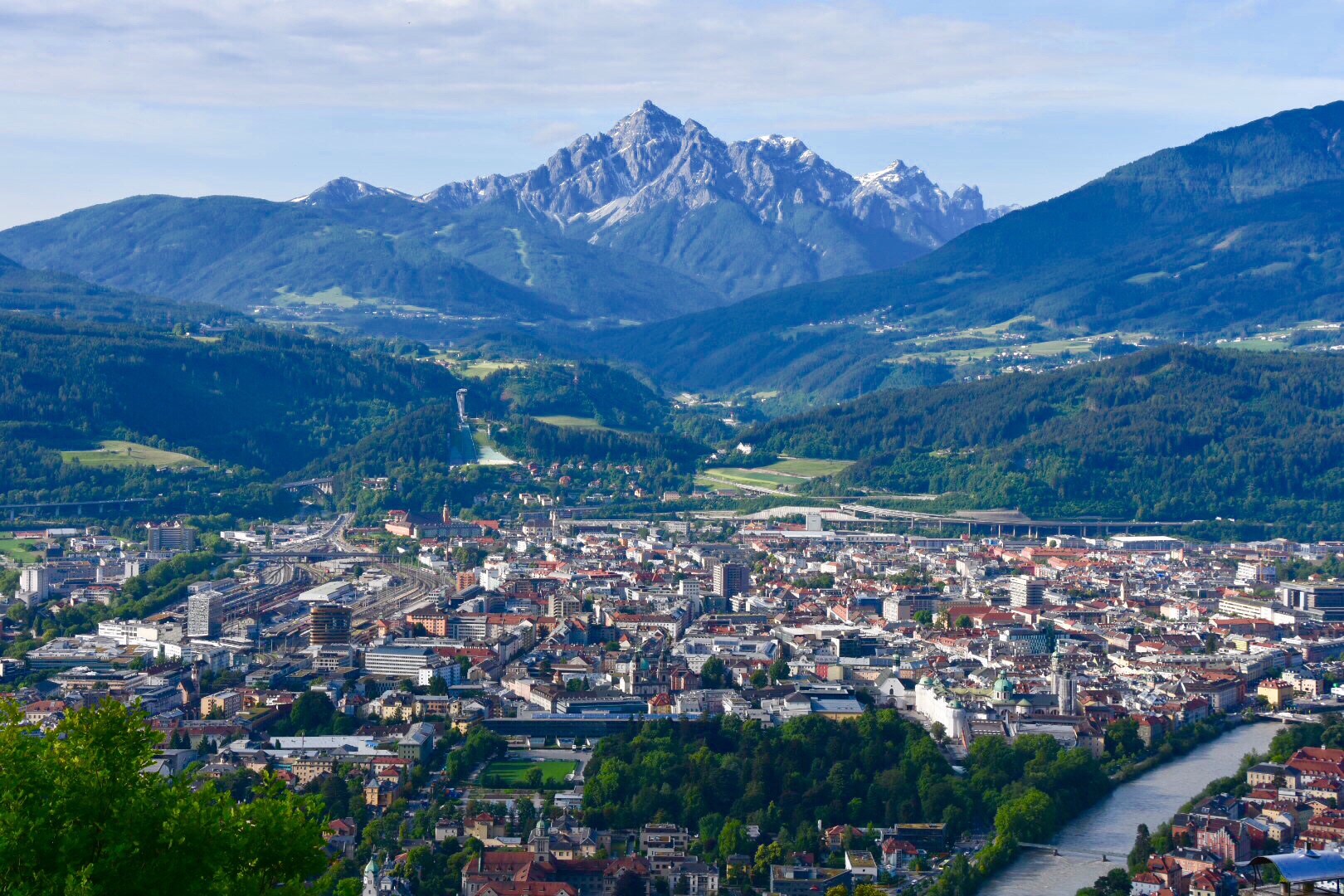 I got back to the hotel just in time for breakfast and what a lovely breakfasting area it was. And an even lovelier hot beverage waitress from Bali who was so lovely I nearly ordered a coffee. All the waitresses were dressed in dirndls which as well as being an actual word is a traditional dress from the Tyrol region. 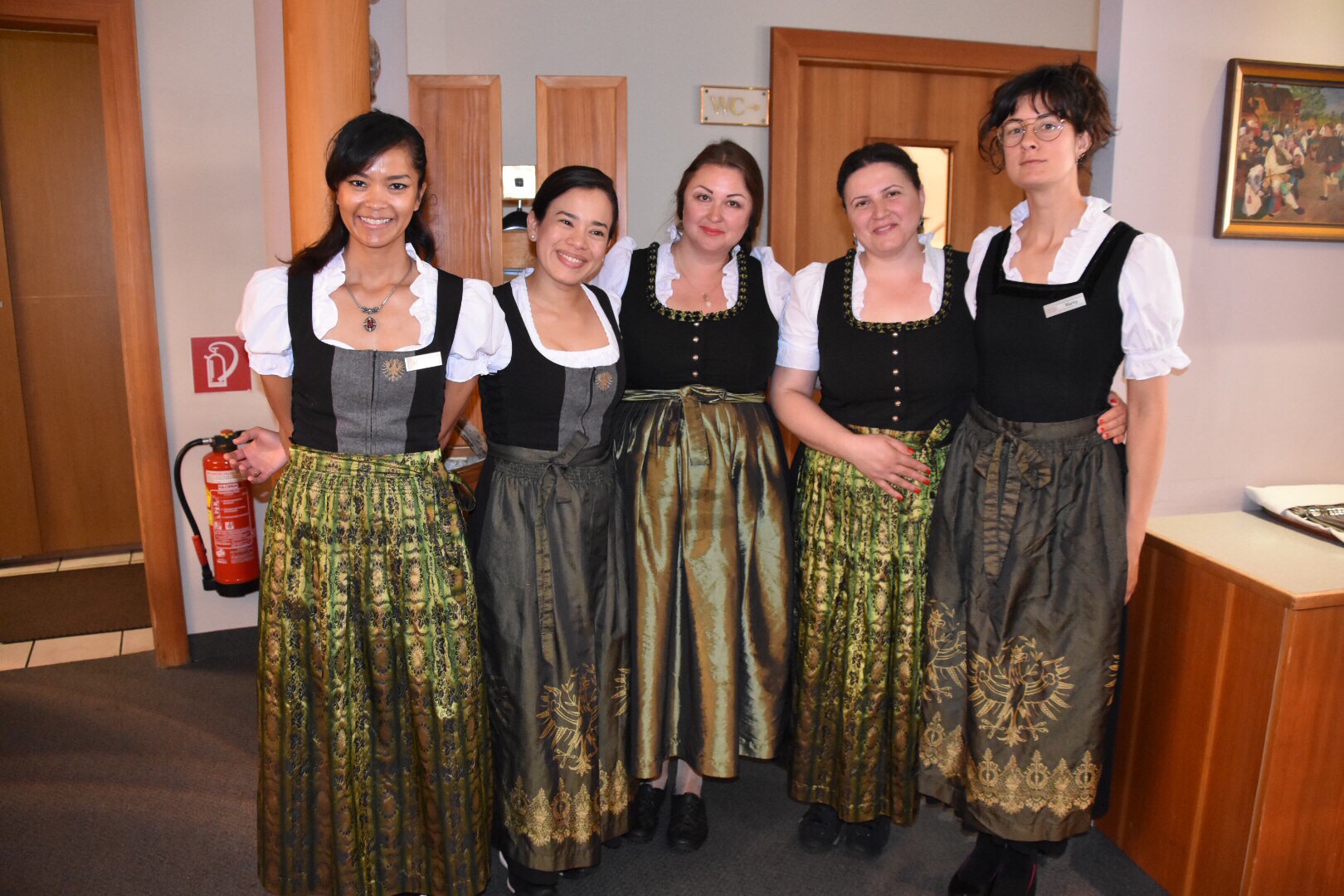 The one I liked is holding a miniature fire extinguisher

Before leaving I had a quick whizz round the old town looking for a magnet and a tea towel. It’s a nice place to walk around the only dangers being cars, bicycles, taxis, trams, buses and maniac kids on scooters. I’m sure you’d get used to it if you lived there but next time I’m wearing Kevlar. 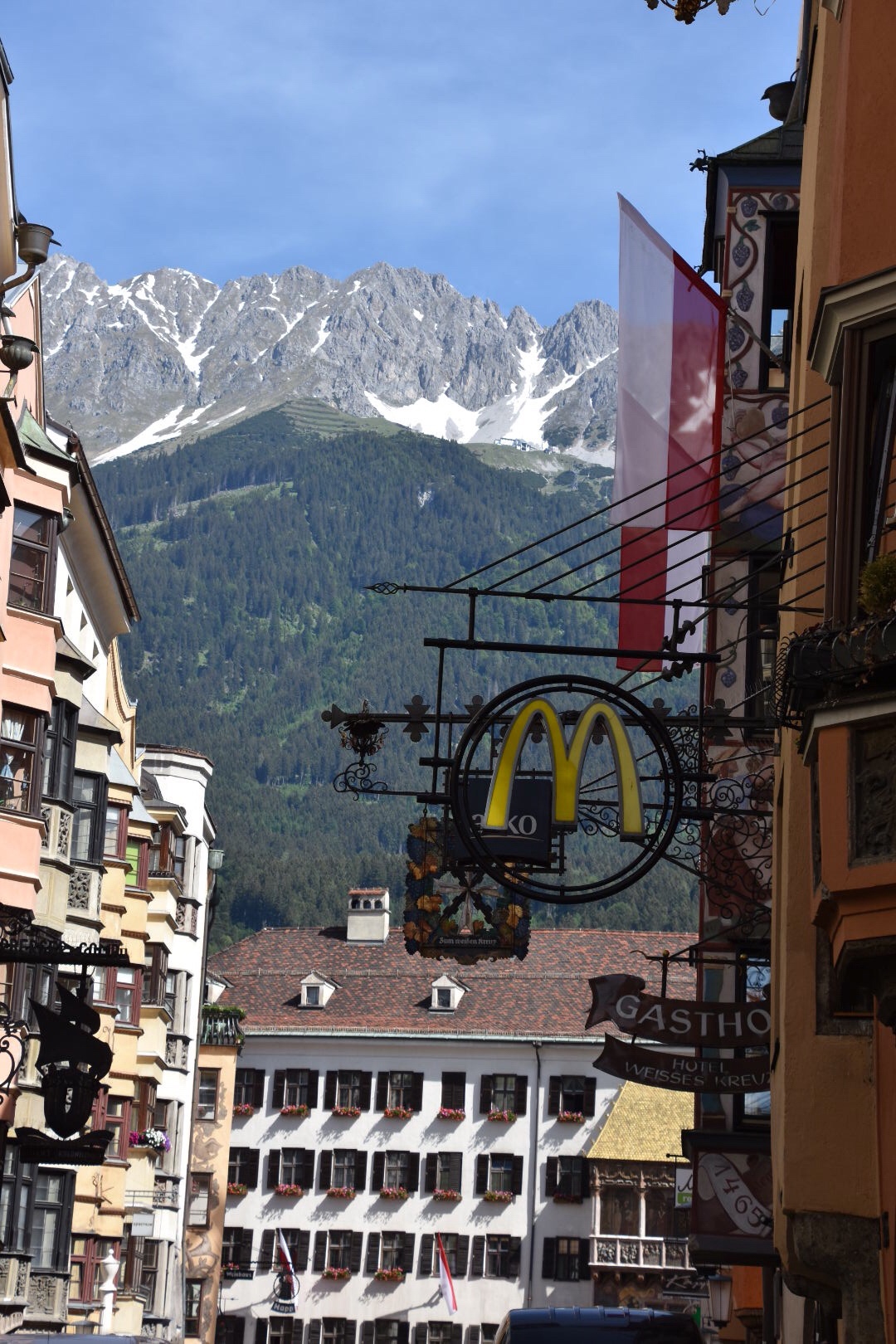 Innsbruck stands on the river Inn which is the fastest flowing river I’ve ever seen. I’ve seen slower waterfalls. It is the capital of the Tyrol region of western Austria with a population of around 125,000. The Winter Olympics have been held there twice – 1964 and then 12 years later in 1976. I liked it a lot and would like to return. 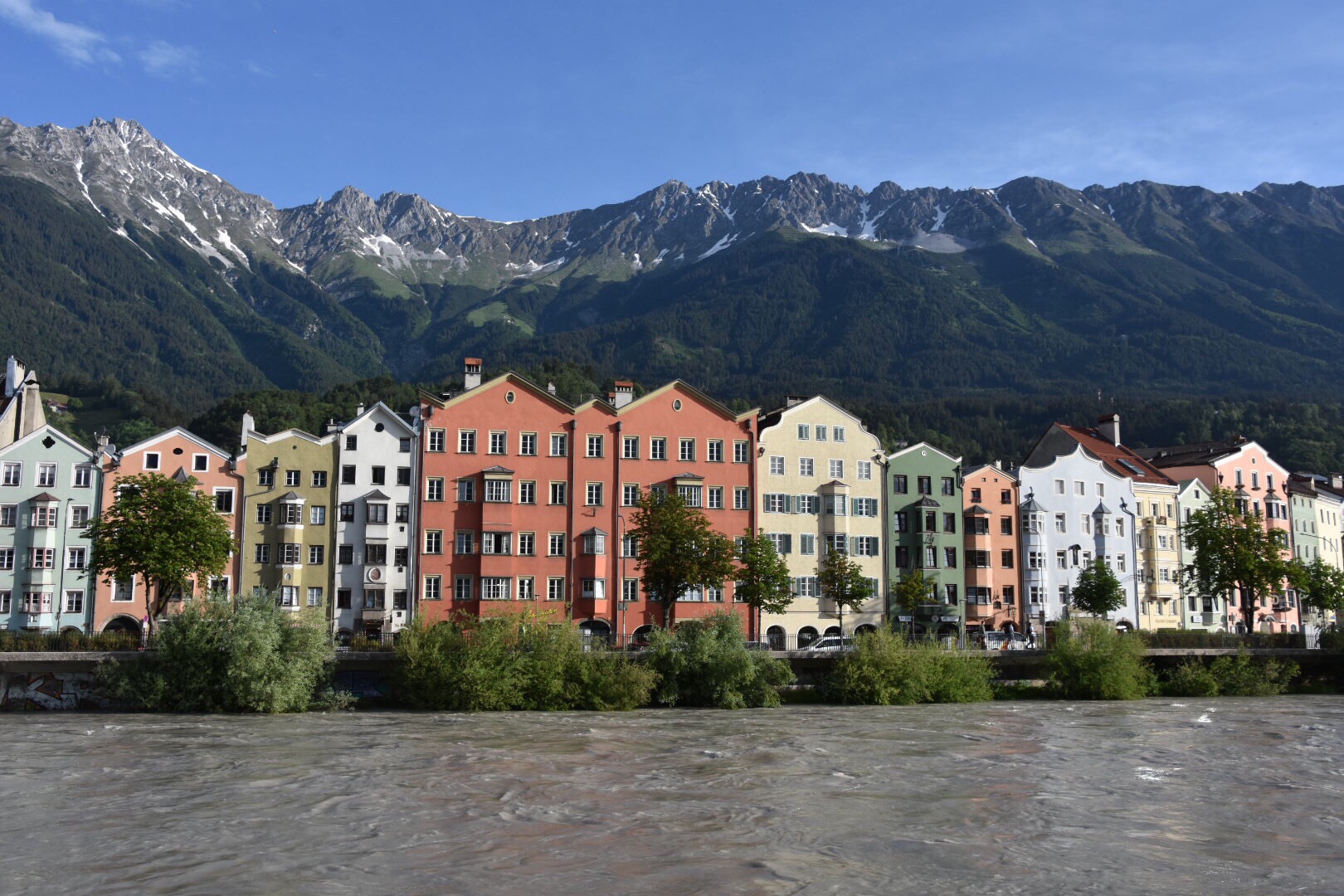