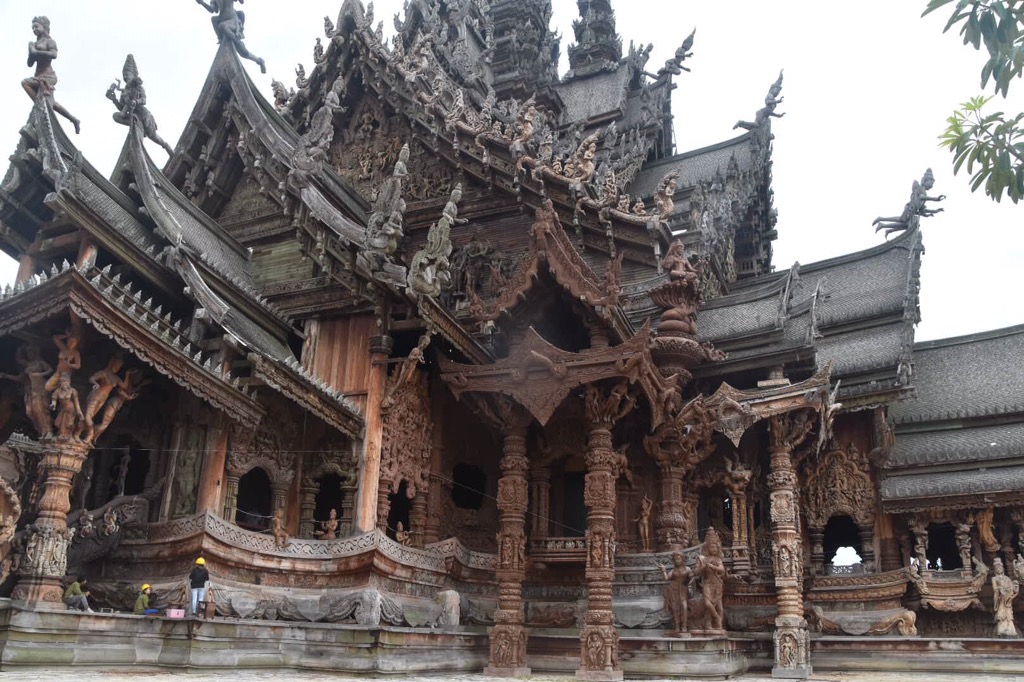 The final blog for this trip involves eight days in Pattaya which was an education to say the least. From Rayong I headed north towards Bangkok and ninety minutes later I reached a place that some might describe as Disneyland for adults. Well, Disneyland for middle-aged men.

I’m staying at the Avani hotel which until a month ago was a Marriott so a little miffed to be missing out on the points but that might be all I’ve got to complain about this week. Let’s see how I get on. The hotel is perfectly nice and the pool area is a beautiful oasis although it has less sunbeds than might be required so I can see some early morning towel spreading going on. Something I missed out on the first morning on account of me not knowing what day it was, where I was or even what my name was. I can only assume the night before was a good one and I will look forward to the flashbacks in the coming days.

It all started with a massage and another disappointed masseuse. Just a massage Kung. In the evening I went to a place which some of you will be familiar with called Walking Street. I found a bar showing sport and then all of a sudden at 19:12 the royal anthem started playing and everyone in all the bars stood up out of respect for the king – even the tourists. I did wonder whether the punters in the massage parlours would be standing to attention too.

Whilst I think of it, lookup the YouTube video of Sgt Somchai directing traffic in Pattaya from a few days ago. This is a man who enjoys his work. It’s superb. Best thing I’ve seen on YT for ages.

After the Frog bar I was persuaded by a Russian transvestite (they always get me) to visit an upstairs go-go bar. Well I didn’t know it was going to be a go-go bar. He could have been leading me to an ice-cream parlour for all I knew. Anyway what they lacked in mango sorbet they more than made up for in raspberry ripple. I had a good chat with Peter who was the Danish owner of the bar. He’d been in Pattaya for nine years and bought the bar 7 years ago. His two children, both in their 30’s don’t have much to do with him anymore as they disapprove of his lifestyle choices. He was plying me with free shots of something or other which obviously had an effect on my memory.

One of the most extraordinary things I’ve seen in Pattaya, indeed during the whole trip was the Sanctuary of Truth which is a temple made entirely from wood. I thought my shed was a feat of engineering but this place made of teak was astonishing. If I’d known about if beforehand it would have been on my bucket list. Not cheap to get in at 12 quid and for an extra 10 quid they offered to throw in an elephant ride around the perimeter and a thirty minute foot massage, that well known trio of packaged activities. I declined but I may have considered it if they’d thrown in a free bowl of soup.

The live music in Walking Street has been very good. Mostly classic rock music and they sound very similar to the original artists. Those bars are usually the busiest. One of my favourite sights was an 8 year old girl standing in the middle of Walking Street with a bunch of hoola-hoops putting on a show that was fantastic. She was making a fortune.

In this rather shallow, vacuous and grubby place my thoughts have turned to more deeper issues such as the the mystery of attraction, why vice is such a magnet and just how they manage to make cargo shorts for less than a fiver. I’ve tried to gain an understanding of how things work here in Pattaya. The two main players are the middle-aged men from all over the world wanting sex with someone younger and more beautiful than they could achieve in their home country, and the economically disadvantaged girls from the north east who are willing to lie back and think of Thailand. The majority of the girls come from an area called Isan consisting of 20 provinces which border Laos and Cambodia. Isan has one third of the Thai population (21m) but the average monthly wage is only 4000Bt or £100 – half the national average. Girls leave families behind, including children, and go in search of better wages in the bigger more touristic cities. In Pattaya the massage girls can earn up to 100,000 Bt per month which is over £2000. A very good salary for Thailand.

Money is a great leveller in Pattaya and the entry level if you’ll excuse the terminology is about £50. You could have every disadvantage going (including being a registered Labour Party supporter) but fifty quid gets you a winning ticket. For that reason the ratio of sad misfortunate men is higher than normal. But Pattaya appears to be non-judgemental as far as I can make out. Well, except for me – I’ve started a photo dossier of men wearing socks and sandals.

The types of tourist here has surprised me. Middle-aged men are by far the most represented but the number of couples I’ve seen here has been an eye-opener. Stranger still are the couples with a baby in a pushchair. Plenty of them about. Then of course there are the thousands of Chinese who turn up on day trips from Bangkok every single day in coaches: dozens and dozens of them. In fact the only tourists in coaches are Chinese.

The other evening I inadvertently walked in the a ladyboy bar – some of the most beautiful women are actually men. I guess if they’re competing in a game where they have a gender disadvantage from the off, then they need to do a good job of it rather than look like Les Dawson in a dress. Anyway he fooled me with his soft voice, long slender legs and silky hair. Arguably I should have noticed the beard but in my defence my eyesight has deteriorated in the past week and it was a little dark.

A few cloudy days this week have led to finding some interesting things to do in the daytime. I’ve tried to balance my activities whilst in Pattaya. A bit of culture mixed with some touristy stuff finished off with something more nocturnal. For example one day I visited a market in the morning, an aquarium in the afternoon and a Russian strip joint in the evening. On another day it was a temple in the morning, a floating market in the afternoon and a vagina show in the evening (which I’ve often thought is the best time for them).

I must say I’ve not been lonely here. A mixture of friendly staff, chatty tourists/ expats and massage parlours every ten metres have seen to that. I met a chap from the Midlands the other day, let’s call him Merv and let’s pretend he’s from Coventry and his wife is called Linda and she’s back in the UK with their three daughters. I could probably devote a whole blog to Merv. His first time in Thailand but certainly no stranger to paid infidelity. In a spree lasting twenty years Merv says in one year it was over 70 so decided to stop counting but estimates over 1,000 in two decades. He awakened me to the swinging scene in one of the Canary Islands where he attends events as a single bloke and manages to have sex with wives whilst husbands are watching. Seven in one evening was Merv’s record. He professes to be an expert at spotting swingers. Most of his extra-marital pleasures of the flesh are when he is out of the country without his wife, however in the Canary Islands she’s there as well and knows nothing as he “pops out” for a few hours. He and I had dinner and actually had a very pleasant evening including my victory against the Burmese pool champion. I think it may have been a bit more subdued than Merv was used to but fun nonetheless.

Allow me to get a little Freudian with you for a moment but if the USA represents the ego, Brunei the super-ego, then Pattaya is the rapacious, unbridled id. I’ve had a thoroughly interesting time here in and walking around the streets dodging all sorts of things on wheels has been endlessly fascinating. At times it’s felt like I’ve been conducting a series of interviews which of course I have. I would definitely return here if only for the cheap cargo shorts. How many pairs can a man own? I’m approaching 20 with no sign of slowing down. I saw a couple of pairs I liked today in desirable shades however they were being worn so not for sale. Anyway, I digress. Pattaya is what it is. It doesn’t pretend to be anything other than one of the main sex-tourism destinations of the world. It felt a bit like Las Vegas in that after a few days one can start losing a sense of perspective.

The staff at the Avani have been exceptional including some fawning all over me. I think they think I’m famous. My particular favourite is a chap named Poj whose job it is to press the lift button. He’s waiting, hands clasped as you approach. He then sticks out a finger reaching for the lift button before pausing momentarily like a long jumper hanging in the air. Then finally he presses the button and as the doors open his hand sweeps down pointing inside the lift which you are to enter. I guess there wasn’t much on the job description so he’s turned this single function into an art form.

I’ve bought the obligatory suitcase to bring back all the guff I’ve bought. I bought one small suitcase and then realised it wasn’t man enough for the job so I had to buy another one and put the smaller one inside the larger on. A repetitive cycle could have emerged however I made the second bag big enough not just for the first bag but also some stuff. Otherwise I could have returned with the Russian doll equivalent of several suitcases. I may be part Irish but I’m not daft.

On the last two nights I’ve had dinner with Emmy my new friend here in Pattaya. She’s 36 and works as a masseuse, speaks great English, has a cute smile and is no stranger to augmentation. On the subject of dinner, I’ve also had a new dinner suit made by a chap from Bangladesh. It was just under a hundred quid which I didn’t haggle over. I figured he’d do a better job it he was doing well out of the deal. I don’t want the arms falling off. I also looked at an condo today which rents at £2000 a month with fab views, three bedrooms and an enormous lounge. Minimum six months rental though! Just in case I may return one day you understand…

Sunny today after four days of cloud so I made the most of it before flying home tomorrow. Factor chip oil.

Great trip. Back to reality.

After getting off the train ride from hell, we had a short ride to our…