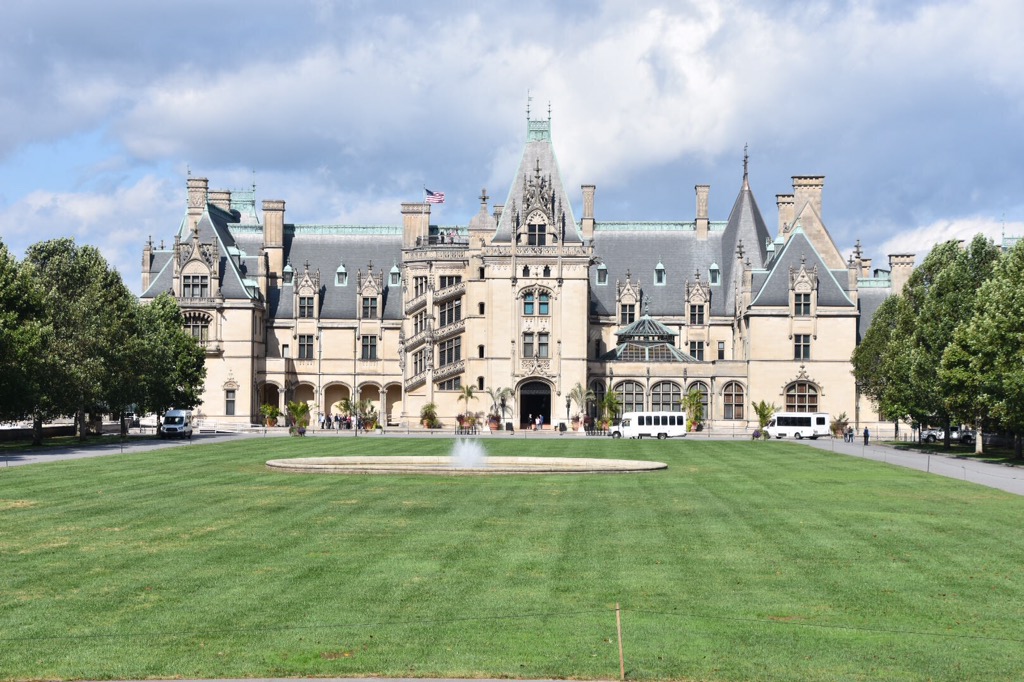 Day one of the road trip turned into quite an ordeal which has called into question my planning skills. 10.5 hours in the car covering 530 miles and I was cream crackered. I took the longer route in order to drive the Blue Ridge Parkway via Charlottesville (white supremacists in the recent news story) but massively underestimated just how much it took me out of the way and how slow and winding the road was. I only managed 2 hours on the BRP before abandoning it for a quicker route however I’d already monzed things up by then.

Billed as one of the most scenic drives in the US it was “nice” but the weather wasn’t great and the road just went on a bit too long. I ended up in some backwater place that tourists rarely visit looking for a gas station. As you enter the interior of the US two things happen. Religious radio stations become more common and you start spotting folk who could have been extras in Deliverance.

I arrived at the Holiday Inn just after 8pm and despite the moustache, Belinda at the check-in desk was a welcome sight indeed. I dumped the bags and headed for the bar.

One of the biggest differences from staying at a modest hotel out in the sticks versus a plush Manhattan hotel is the cost of food and drink. Two glasses of vino and dinner for the price of a Pinot in NY. Admittedly I had to dine with would-be participants of the Jeremy Kyle Show but I managed to put that aside as I quaffed my second Sauvignon. The waitress sounded like James Earl Jones after a heavy night but was pleasant enough.

The following morning I had scheduled a trip to the largest residential house in America – the Biltmore Estate here in Asheville. Built in the late nineteenth century by George Vanderbilt, grandson of Cornelius Vanderbilt who first established the family fortune. Although he didn’t inherit the majority of the wealth, in 1877 aged just 15 he received $1 million when Cornelius died. At 21 he inherited another $1 million and a further $5 million at the age of 23 when his own father died as well as an income from a $5 million trust fund. He wasn’t short of a few bob.

So he decided to build a house in the country and ended up with a chateau with 175,000 square feet of living space. I know; the utility bills would have been enormous. To put that in some sort of perspective, the six floors of the White House total around 55,000 sq ft. But compare it to Buckingham Palace and it’s bijou.

It was George and his third generation siblings and cousins where the money stopped accumulating for the Vanderbilt family. Anderson Cooper, the CNN anchor is sixth generation – his mother was Gloria Vanderbilt. George Vanderbilt was actually booked on the Titanic but cancelled with a week to go. His luggage and butler were onboard though. Interestingly Henry Clay Frick (The Frick Collection in New York) also cancelled his Titanic ticket.

The house was truly splendid. Even the servants had nice quarters although it has to be said, despite the size of the house both Mr and Mrs VDB had small 4’6″ beds. One can only assume that the king size hadn’t been invented at that time.

I looked around the gardens and came across the greenhouse (huge great thing) where one of my favourite movies was filmed: Being There with Peter Sellers playing Chance the Gardener.

2300 employees run the Estate and each year 5000 apply for about 100 vacancies. I was struck by just how friendly and nice all the staff were so I suspect these are the qualities that the Biltmore Estate look for.