After binge watching Game of Thrones on my second Airbus 380 in a row I arrived in Johannesburg champing. I sat opposite a German chap from Bavaria on the flight and after initially trying to strike up a conversation about Bayern Munich I soon realised he wasn’t a chatter so I abandoned that idea. I do find people in business class less friendly. There seems to be a snobbery in club class which I find a little bemusing.

So I was ready to meet my fellow travellers and after making contact with Petro (pronounced nothing like that) our female Exodus guide the first fellow adventurer I met was John (53) from Lincolnshire. Interesting guy and a former Tae Kwan Do champion. Then I met Hans from Frankfurt who is married to Malaysian Ruby (both 70’s). The rest of the group are from the UK aside from one American chap – five couples from early fifties to late seventies and six singles – three men and 3 women. 16 in total squeezed into a 16 seater minibus.

We headed straight off in the direction of Kruger National Park and after six hours driving we reached the Mogodi Lodge which had a swimming pool that looked more like a pond but I had a dip anyway. An evening of socialising and merriment followed. My single bed was the narrowest I’d ever encountered with a good chance of a roll off.

An early start on Monday with three points of interest on the morning agenda within close proximity to one another. The Mogodi Lodge was 4600ft ASL and out first stop was God’s Window about ten minutes away. Well, top ten percent of views I’ve ever seen. We were so high up that a thick layer of cloud was about 1000ft below in the canyon. 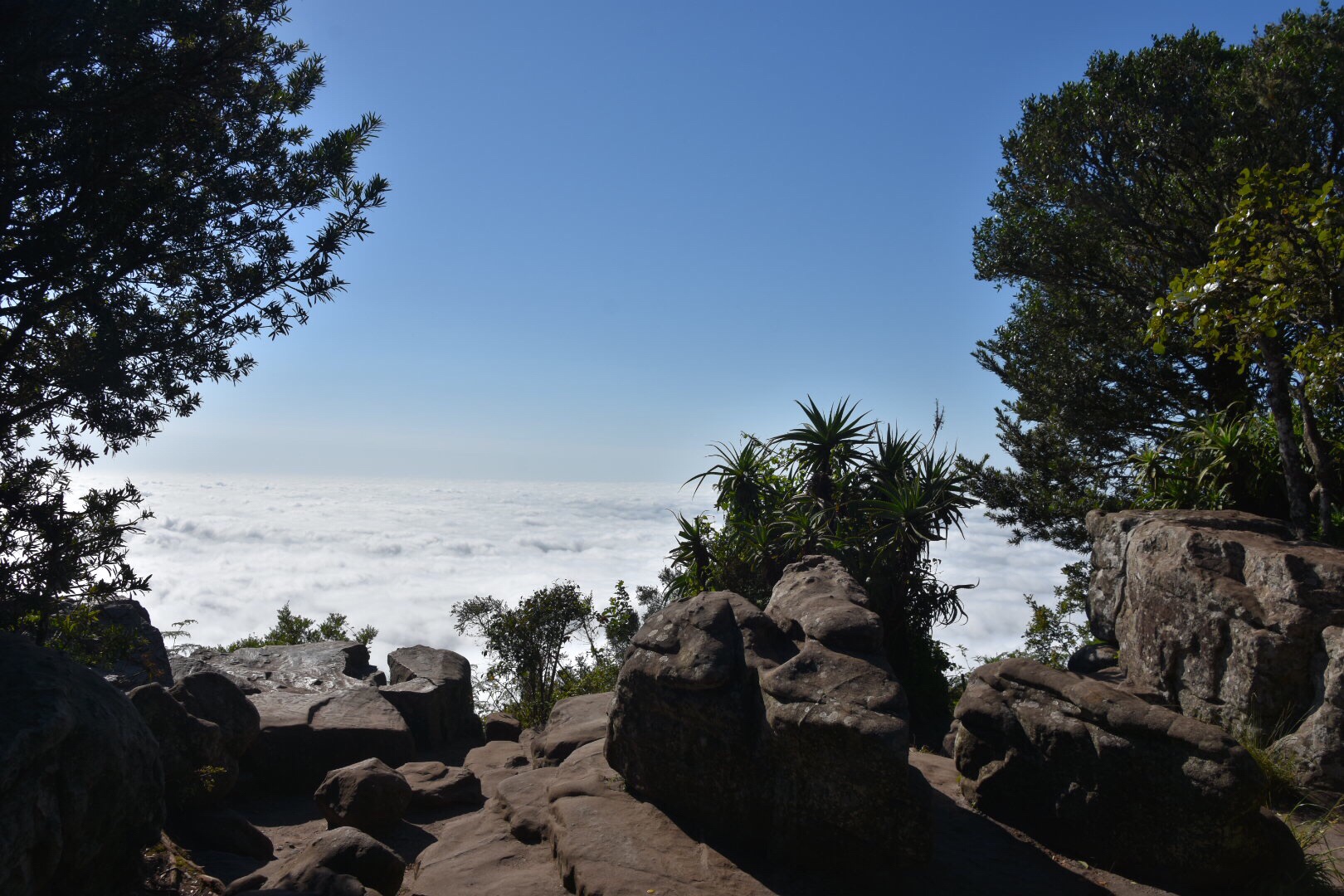 Our second stop was Bourke’s Luck Potholes which I don’t suppose anybody’s heard of but is quite something to see. 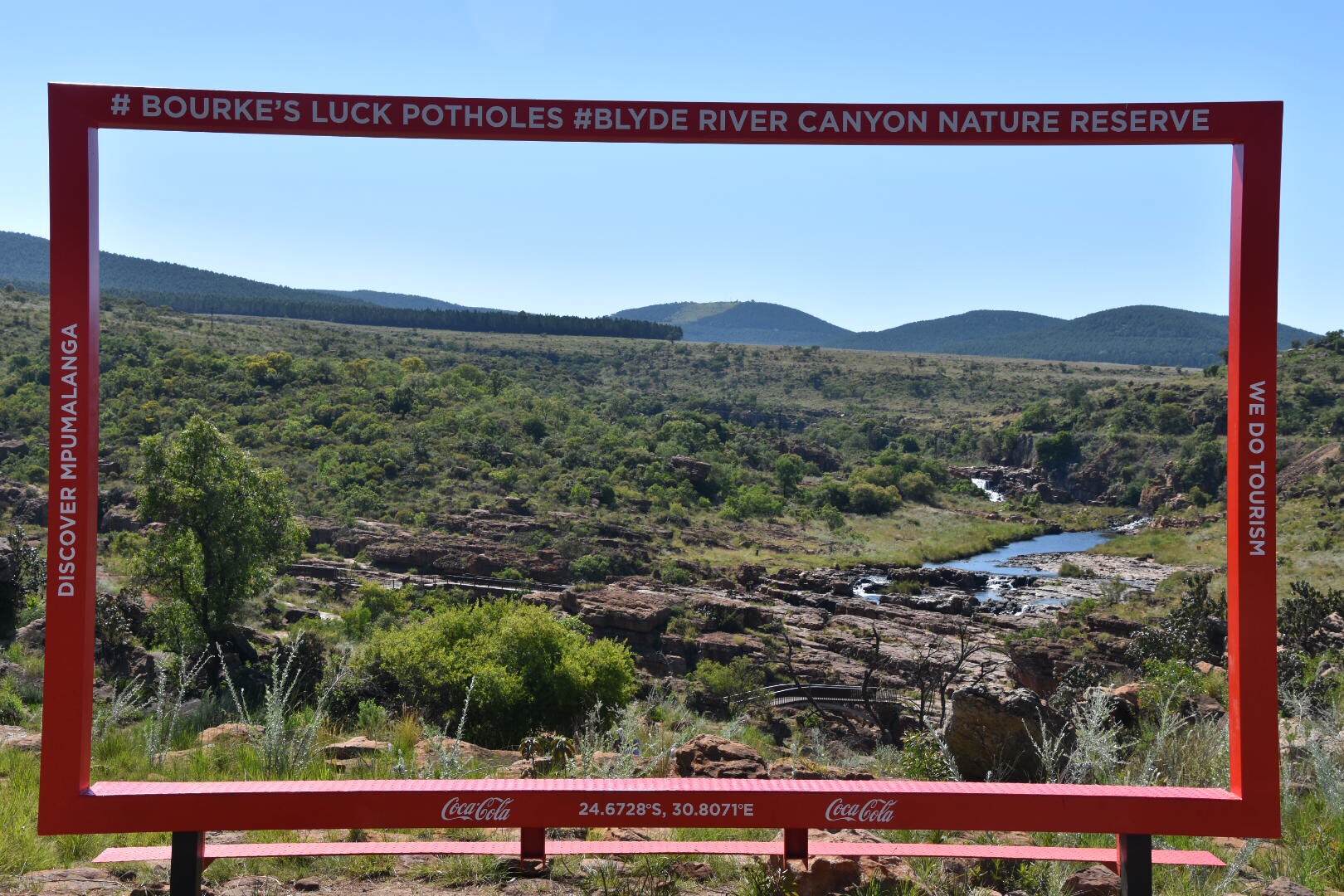 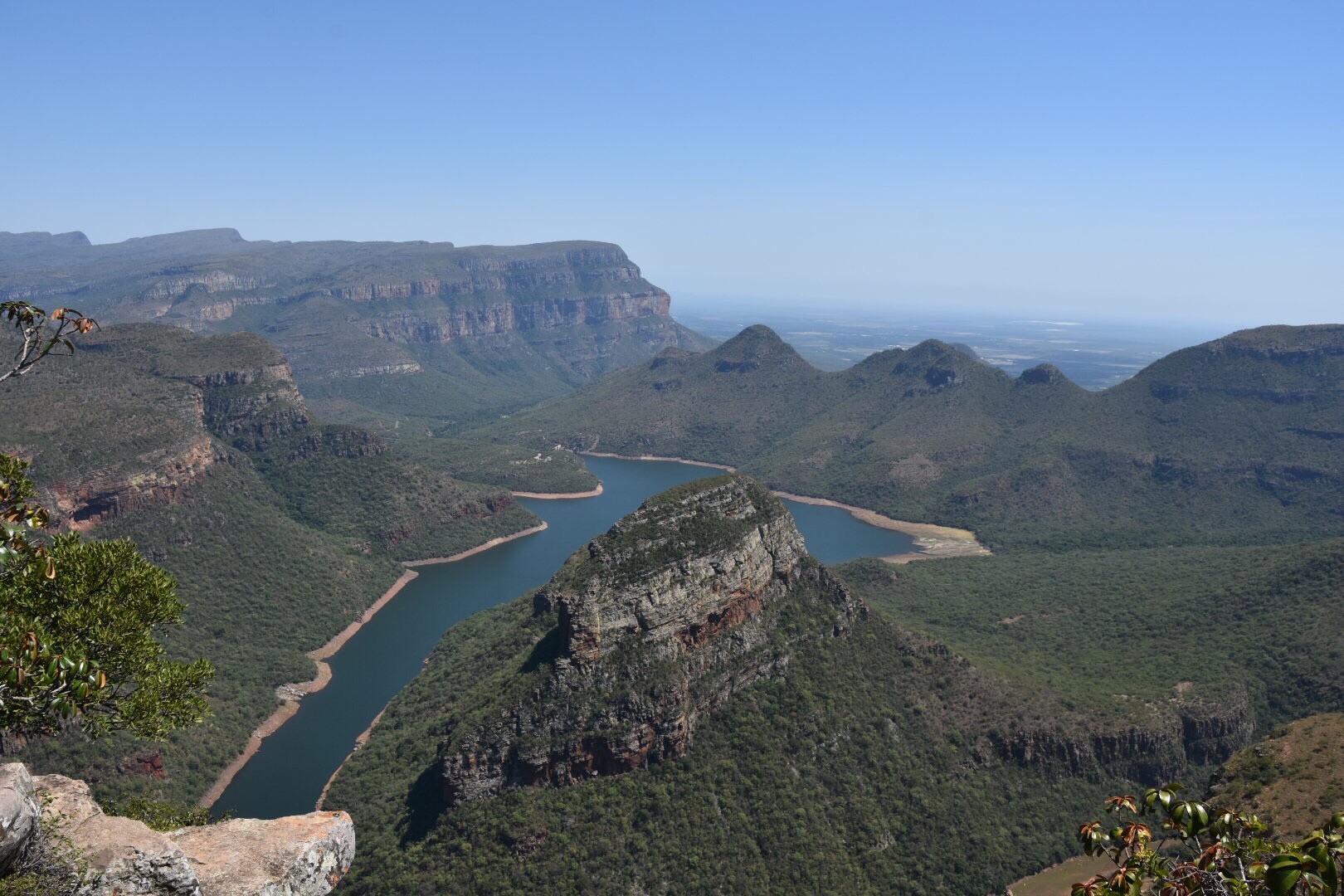 Next it was the town of Hoedspruit (pronounced in some peculiar way) for provisions. We were staying in tents for the evening in a game reserve without a bar. I know. Can you conceive that a place like that actually exists. I also needed malaria tablets because using my world traveller experience I forgot to even think about malaria.

The day before was a manageable 32 degrees but on Monday it was 40c and you can cook things at 40 degrees. Two and a half hours in the minibus and we were roasting. No AC. All part of the adventure apparently. We arrived at the Letaba Ranch for our genuine safari experience and I was given a tent away from the others. It was an unfenced camp meaning they shared it with the animals including the big five. See if you can name them. Answers at the end of this blog. The advice we were given in our safety briefing was that if we heard anything outside the tent, don’t go look. The others had a cabin with a key but I was the fortunate one with a sturdy zip which none of the big five have mastered so I felt safe.

So after a spot of lunch we headed off for a game drive in a canopied Toyota Land Cruiser. It was moderately fun and we saw elephants, giraffes, nyalas, impalas, a jackal and a tortoise. By far the most impressive were the elephants. We were out for over three hours and headed back in fading light being chased by a lightning storm. Once back it was dinner and then the heavens opened. I rushed bravely to my tent in the darkness with only a head torch for company and zipped myself up for the night. For extra protection against night predators I utilised the mosquito net. Again none of the big five can find the proper entry point to the mosquito net. Well, the storm was magical and aside from thinking my tent was going to take–off I enjoyed it immensely. It had been a day of highs and lows and I lay on a wide single bed that I wasn’t going to fall out of and finished off Game of Thrones. They want us up at 5:30am for a game walk. They’re ‘avin a giraffe.

I missed the game walk of which the highlight was a hurrumph of hippos (I made that up). When I did wake and unvelcroed the window there was a dirty great lizard behind it so I velcroed it back up again rather sharpish. I was glad to be leaving the Letaba Ranch as there weren’t really enough amenities for my liking and the insects were winning. The night before I’d spent half an hour bug killing trying to watch the laptop inside a mosquito net.

Tuesday was a modest drive until we reached Kruger National Park where we will be for the next two nights. Once inside the park we had another three hour drive to the camp site which turned into a five hour drive with multiple stops for various animals. Elephants, zebras, a white lion, giraffes – all ok to stop for but tortoises! In the end we stopped for almost everything including some seriously average birds and every type of antelope you could imagine which are in abundance.

We reached our destination just as it got dark and dispersed into our huts. Three single beds in mine but no Corby trouser press. Not a single glass either so I’m swigging my white wine from the bottle. I’ve gone native in a matter of days. It’ll be roadkill next.

I missed the early morning game drive at 4:00am. Not sure how that happened. The rest of the day was free time so I had a massage of course. At 4:30 we set off on the sunset game drive. Game drives are essentially the animal kingdom’s version of cricket. Lots of tedium sprinkled with the odd bit of excitement.

In no particular order we saw impalas, warthogs, elephants, zebras, giraffes, hippos, rhinos, baboons, buffalo and a hyena. It was brass monkeys too after the heat of the other day. Toward the end the light faded and we had spotlights to search for animal sightings. We didn’t see a thing. I felt sorry for the next group who were on the evening game drive. Three hours pointing torches at bushes in an open truck in chilly conditions.