The three sea days sailing toward the Mediterranean provided an opportunity to acquaint myself with Britannia and the P&O way of doing things. This was also the first time I’d cruised from a UK port and the first time I’d sailed with 700 kids. My last cruise had only two children so you can imagine my delight when I boarded this one.

As you may have guessed, the overwhelming majority of passengers are English and as such it felt a bit like an endless Dover to Calais ferry crossing only with more felicities. Butlins at sea is a fairly good description. The type of people you might find in Lidl or a motorway service station all converging to urinate and buy an overpriced sandwich. 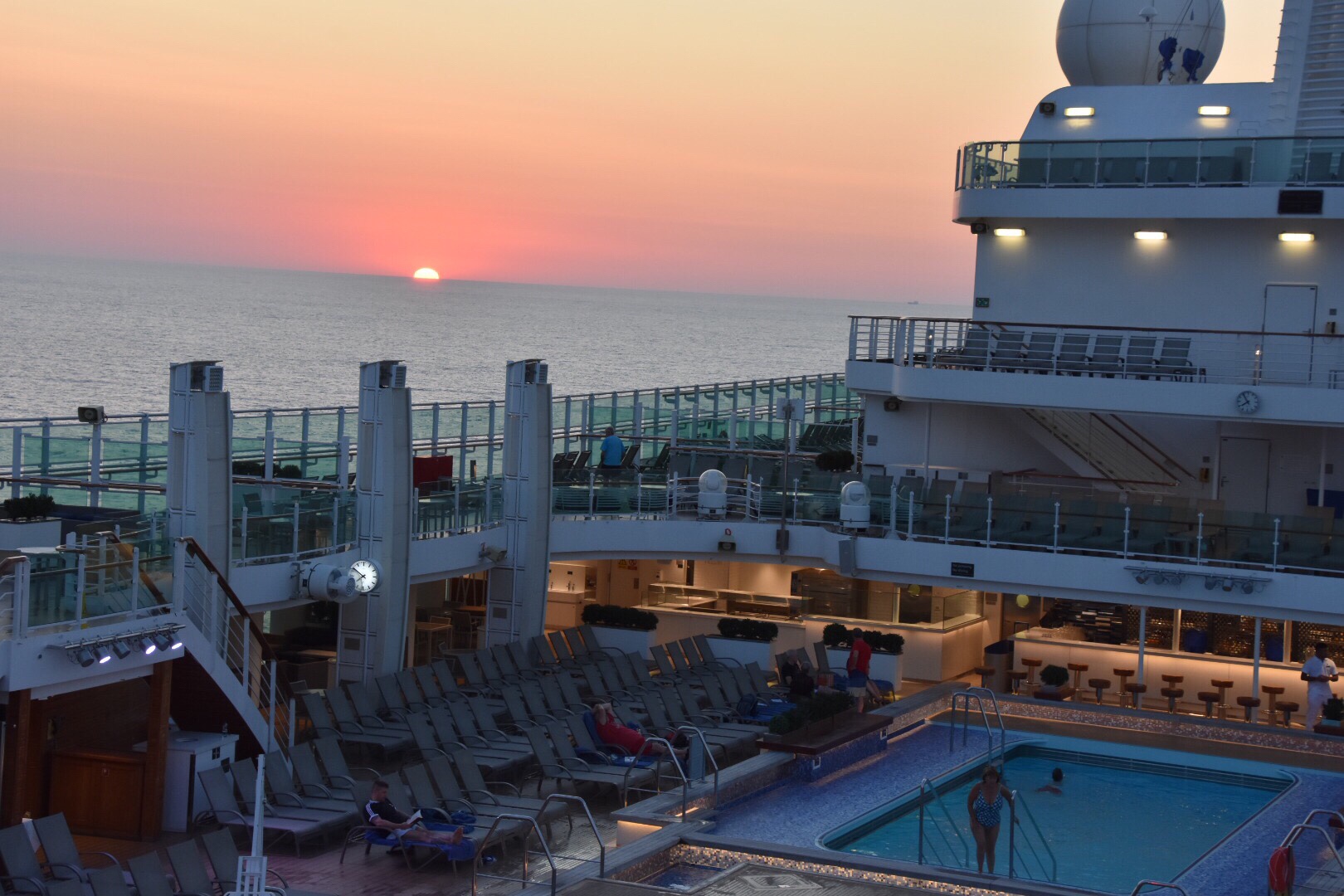 With passengers totalling 3,994 – 50% more than anything I’ve sailed on before, it does feel a little crowded at times. The conclusion of the safety drill felt like Calcutta during rush hour and when the sun’s out, every square inch of deck space has been covered with tattooed northerners noshing cheeseburgers and swigging beer. Luckily my inner snob turned up early so I upgraded to a private area called The Retreat which has plush outdoor furnishings with cushions thicker than the entertainment staff. Georgia and Hope also upgraded so I’ve seen plenty of them in the daytime. During the evening our different interests drive us apart. I’m keen to teach Georgia the mathematical delights of blackjack but she’s resisting.

I’ve found a gang. 16 of us turned up to the solo travellers meet and it was the usual bunch of misfits. I managed to siphon off four of them by inviting them to join me in history trivia – always a winner.

Estate Agent Davina (57) is English but lives in Swansea and is onboard with her son Tom (17) who has one of the strongest Welsh accents I’ve ever come across.

Then there is Andy the truck driver from Goole (a Gooley) who is 50 on the day we arrive in Alicante. He booked the cruise ages ago with his wife but in between booking and the cruise he decided to get divorced so he’s on the ship alone.

Phil (Philomena) is 52 and has 11 tattoos. She’s a northerner who lost her husband in January last year aged only 48. Dropped dead of a heart attack. Her first cruise.

Paula (50) lives in Fleetwood near Blackpool and works in IT. Her first cruise too and she’s taken to it very well.

In other whinging, there were a number of people in the gym with unsuitable footwear which I found quite distressing and the quizzes are of a little unsatisfactory but aside from all that, I’m having a super time.

As for the Bay of Biscay, it started as a gentle swell and I am rather partial to swellings of a modest variety, and by lunchtime it was like a millpond. Don’t know what all the fuss was about. We reached it 13 hours out of Southampton and it took roughly (or should I say smoothly), 21 hours to cross before passing Finistere in northwest Spain.