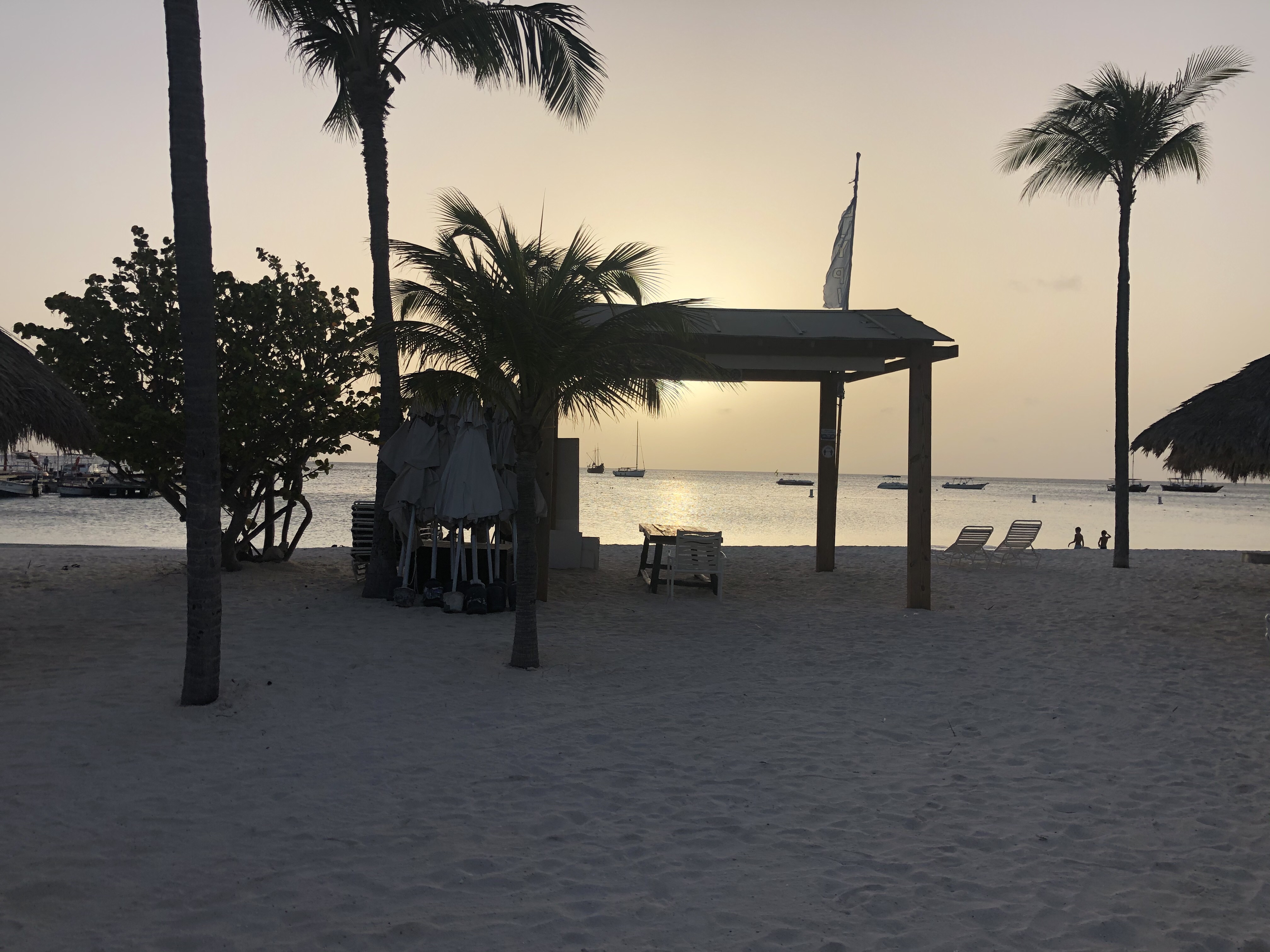 Well I knew the peace and solitude would come to an end at some point. Aruba opened to Americans six days after the first European flight and half a dozen planes arrived from various US cities on Friday 10th followed by another 10 flights on Saturday.

The island slowly came to life and the Holiday Inn with 600 rooms started to resemble a hotel again. They even had a balloon arch and people dressed in feathery outfits to welcome the first US guests. Thankfully, I got no such welcome although I was rather taken by this chap’s cowboy boots. Three days later they decided there were enough guests to open the beach bar which meant that rotund Hugo didn’t have to walk as far to deliver my Diet Coke every 45 minutes.

Before the American invasion, I was almost the only person on the beach for five straight days and I think under such circumstances, bright green speedos and a BOSE speaker blaring out emotional country ballads is acceptable. My Robinson Crusoe experience was briefly interrupted midway through the week when an oversized foreign couple decided to perch nearby. I had no idea where they’re from. I heard an accent but I can generally only discern French, Spanish, German, Italian, Finnish (thanks to Irje), Swedish (thanks to my cousins) and sometimes Welsh but that’s hit and miss. By the look of them, I suspectedsuncream is a major holiday expense. It was Friday and another beautiful day in Aruba at about 87°F with a welcome easterly breeze which seems to be a common feature on the island. All the palm trees have that distinct Donald Trump hairstyle.

I met my first American guest that afternoon. John had flown in from Newark but lived in Connecticut. A compact black guy a few years younger than me. It was only his second flight ever. We chatted for ten minutes and I also filled him in on what had been happening. That didn’t take long. He was walking around in his plane clothes because his room wasn’t going to be ready for another hour. Curious I thought. They’ve had over three months to get his room ready. Must have been quite a room.

The following day I saw John again and this time his wife Brenda was with him. Originally from Puerto Rico (good Puerto Rican name is Brenda) they met when John was 20 and she was 18. She already had a child and John had custody of his 3 boys and they married and went on the have 3 more together.

A few days later I spoke with the English couple that were on my flight, Sally and Guy, again my sort of age, they were heading back to Breckinridge in Colorado where they’ve lived for 10 years running an Oxygen Bar. Never heard of one of them but I guess at 10,000 ft it’s not the worst idea.

Sadly for me, the Marriott casino opened when the Americans arrived and regrettably it was only a ten minute walk. I won on more days than I lost but that doesn’t tell the whole story.

About a week in, a group of 24 turned up from Boston consisting of parents and older teenagers. I spoke with a few of the chaps – Mark and Michael and they had all became friends through the the kids’ school. Looked like a lot of fun to be in such a big group although Mark said he’d had enough of them after five days.

By the time I left, 10 tourists had tested positive for Covid-19 and were isolated in one of the smaller hotels. Can’t be much fun, flying for hours to a beautiful beach resort only to be stuffed in a hotel with other sick people. Now that wasn’t in the brochure.

The only other couple I met (pictured below) were a duo from New Jersey who often sat just along from me on the beach playing music. It was almost like they’d stolen my iPod so I had to ask them how old they were because music can be age specific and no one I know has ever played Air Supply, “Two Less Lonely People In The World” and sang along in a tremulous shrill. She was 59 and he was 53. The following day I heard her singing to “Let’s Get Physical” which as you can see, caused a Roger Moore eyebrow incident.

The hotel had decided to clean rooms every five days and when they did you couldn’t be in the room at the same time. I decided that I didn’t need even intermittent maid service so I put do not disturb on for the whole 15 days. I would routinely leave the room with trash and deposit it in various bins around the resort. Good luck Consuelo!

On the final day I met Andre who made his own aloe and as I felt like supporting the local economy, I bought a bottle of homemade apres-sun. When I got back to the US I asked Dianna to apply it but she took one smell of it and concluded that Andre’s special concoction probably contained more than I’d bargained for.

When Dianna and I visited in December it became her favourite Caribbean island. I wasn’t quite so taken the first time round but I think she might be right. If chilling on the beach, warm sea, sunsets, friendly locals, a gentle breeze and palm trees that remind you of Donald Trump is your thing then Aruba is the place.

I cleared US customs in Aruba and I’m heading to Miami as a domestic arrival.

An Afternoon in California I arrived in L.A. ten hours before I left thanks to…