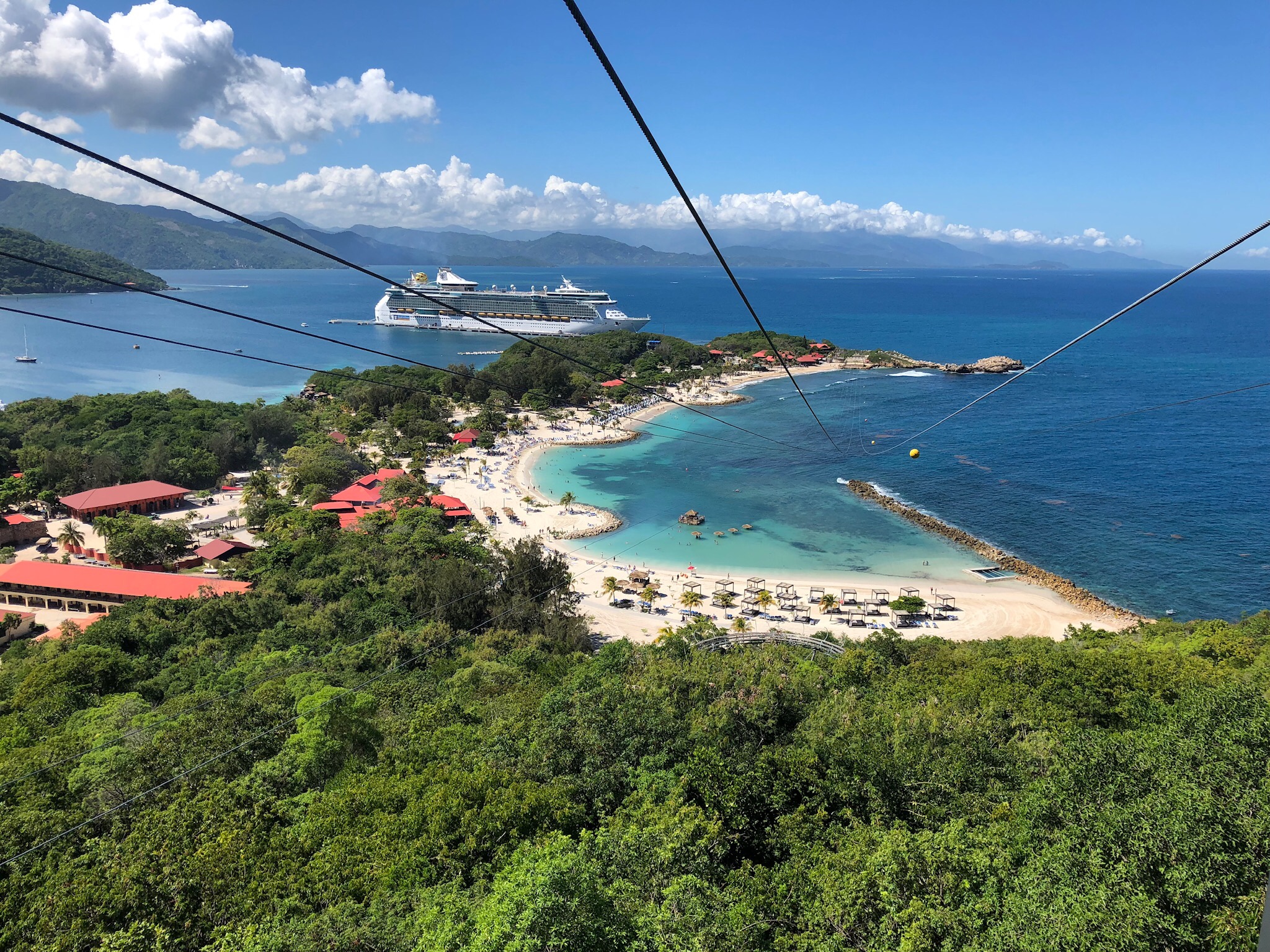 Can I count Haiti as a country visited if I’ve only visited the private resort peninsula of Labadee owned by Royal Caribbean? My guess is that is might be a little different from the real Haiti but geographically speaking, I have now visited Haiti, the poorest country in the Western Hemisphere, so it’s officially ticked.

Labadee has been used by Royal Caribbean for nearly 30 years and they have a lease which runs until 2050. The resort provides employment for 300 locals and they also allow 200 vendors to sell their virtually identical tat. The vendors (I think I met them all) pay a fee to have a stall and sell wood carvings and more wood carvings and just when you think you’ve seen enough wood carvings and come across some Haitian art, more wood carvings appear. They weren’t very busy despite 4000 tourists swarming all over this small peninsula in need of wood carvings so I was very popular as I sauntered along showing my appreciation for the various wood carvings. I did purchase a few items and I cannot deny that wood wasn’t involved. 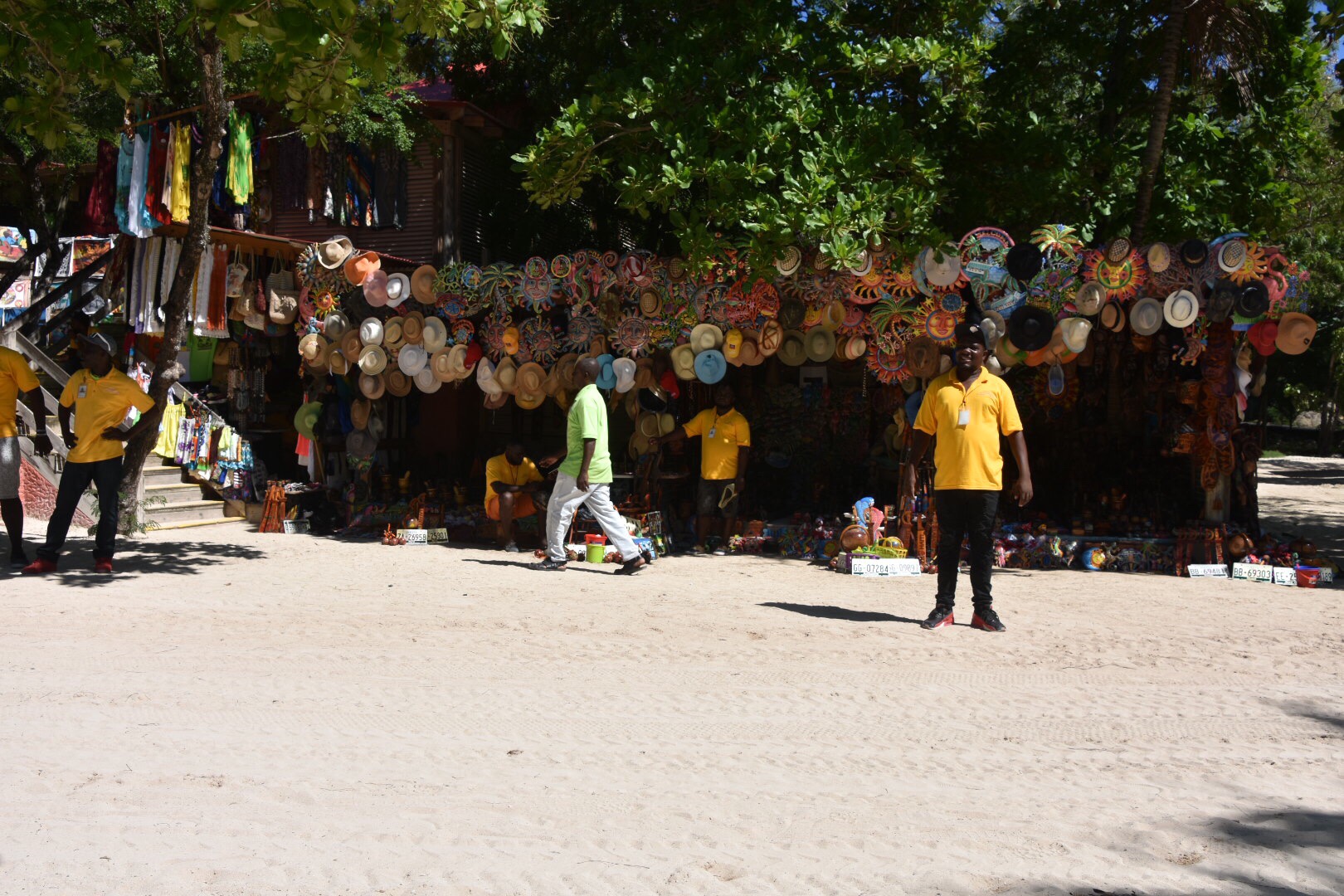 I actually felt quite angry that RC were taking a fee from 200 vendors when about 10 stalls would have been sufficient. I shouldn’t think the majority of them took any money at all. It creates false hope for the vendors and the competition between them results in the few tourists that do run the gauntlet being surrounded. It’s just not something I experience in Waitrose. They all beg you to come into their shop which is no different to the last blokes’ shop. This hassle puts tourists off, even those looking to increase their collections of wood carvings.

It was a beautiful spot and the weather was marvellous. There are plenty of activities for the adventurous traveller but the stand-out attraction had to be the Dragon’s Breath zip line which starts 500ft asl and is half a mile long, mostly over water. It was the best 60 seconds of my year (and I’ve had a good year). Absolutely loved it. Couldn’t stop smiling. 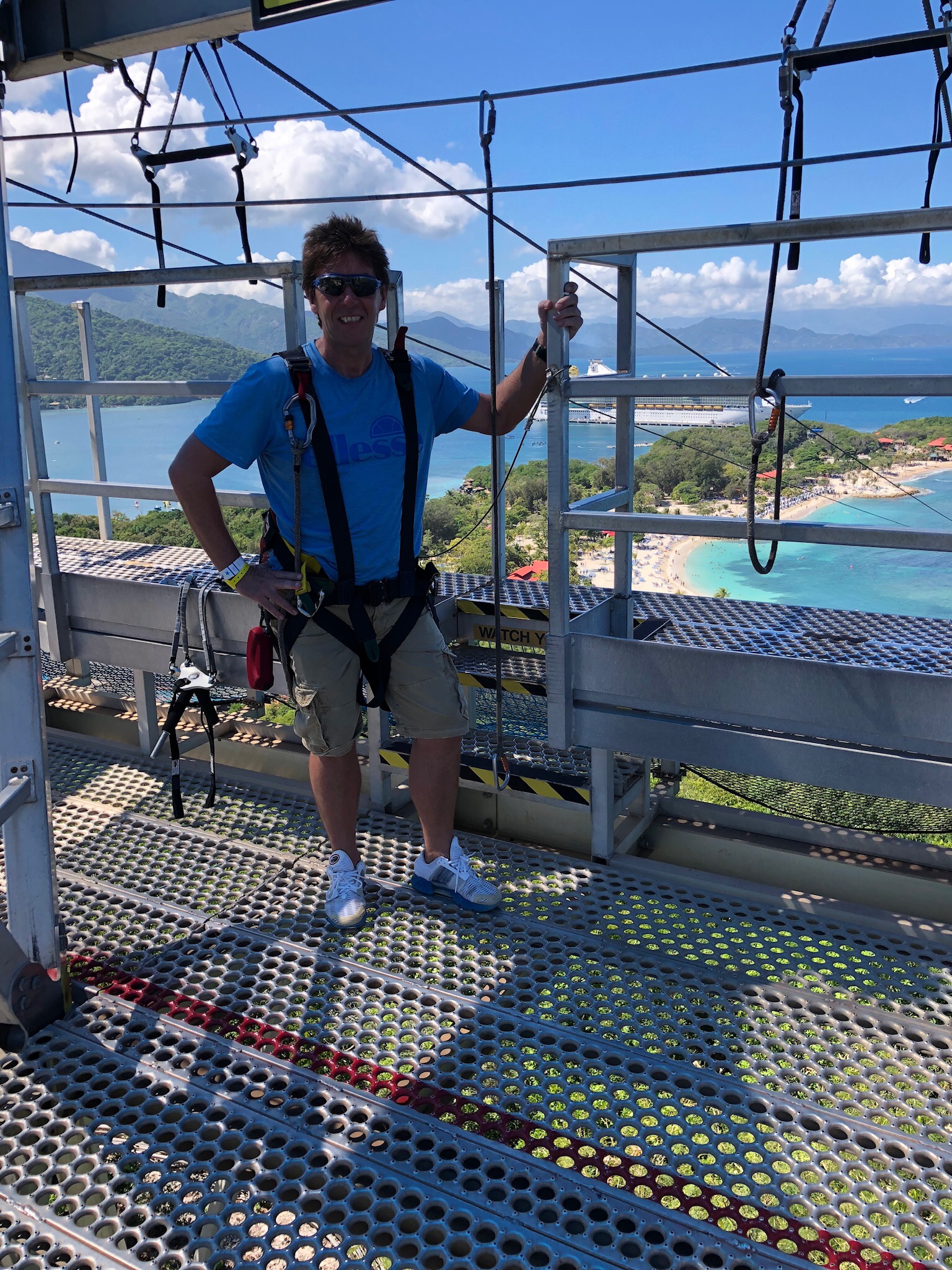 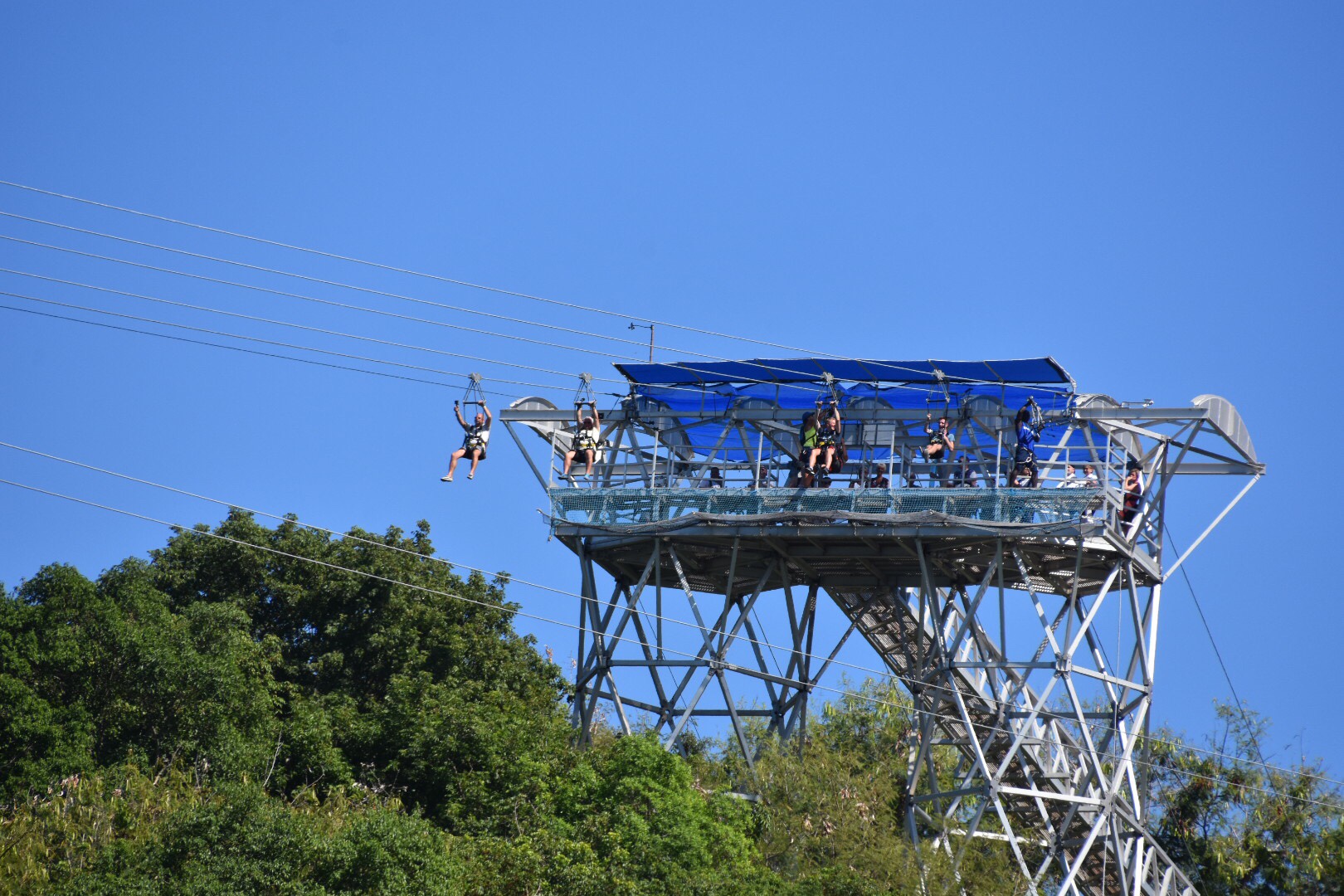 Not for the first time, I was embarrassed by the actions of my fellow Brits as two women decided to have a screaming match about seats on the trolley bus. Then there was the boozy singing on the floating bar and the general loutish, gobby behaviour. No manners and no class is how I’d describe a lot of these Brits. By all accounts it’s become a hot topic on Cruise Critic. 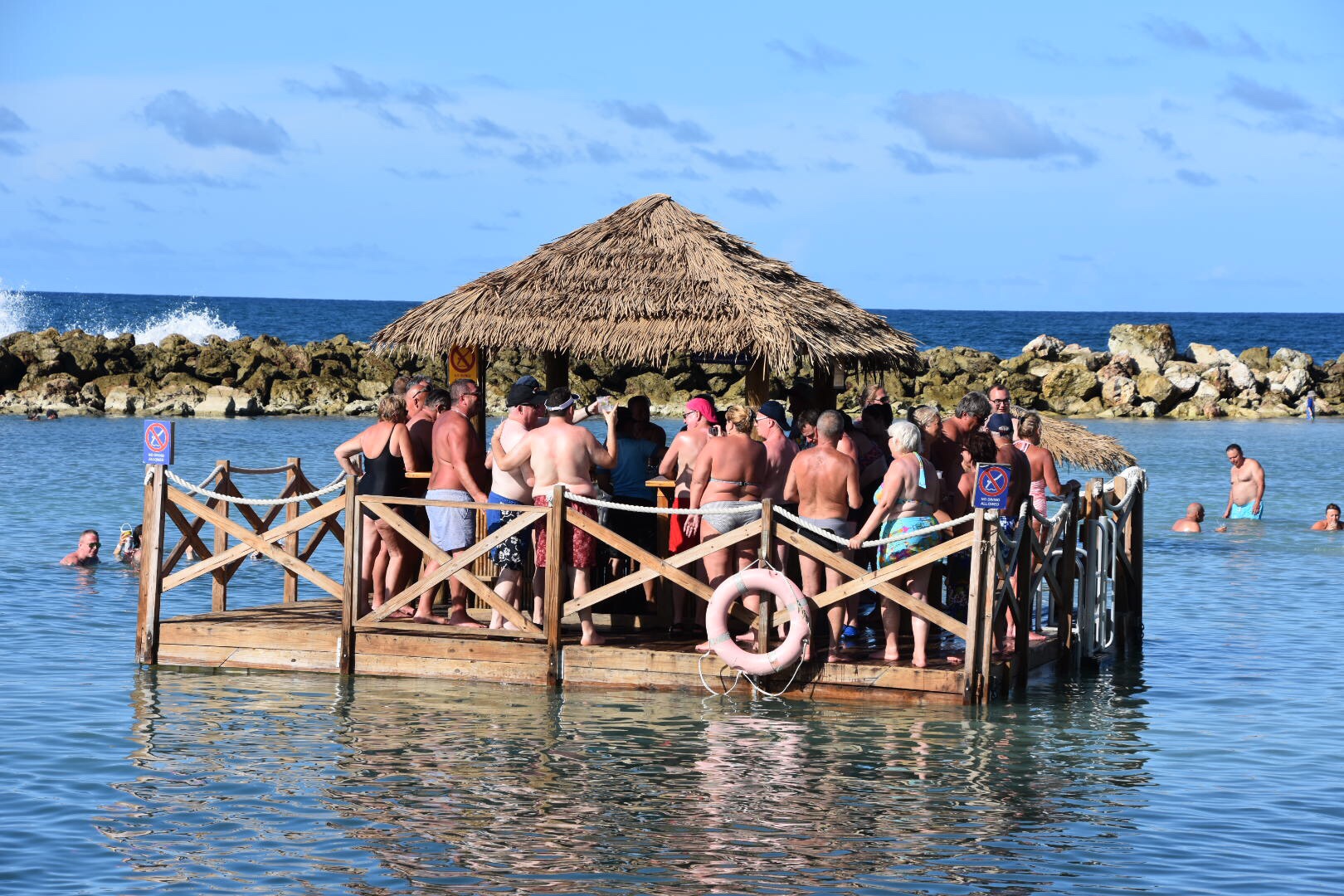 Back on board, we have one one last sea day before arriving in Fort Lauderdale and I’m reflecting on my first transatlantic crossing.

There’s a petite blonde French Canadian girl called Carolina who works for the entertainment team. She is so entertaining in a madcap kind of way. Absolutely bonkers but a real scream. Half the time I don’t think she even realises just how funny she is. She does the daily Zumba class which I’ve missed until today so I went along. It was exhausting just watching her. 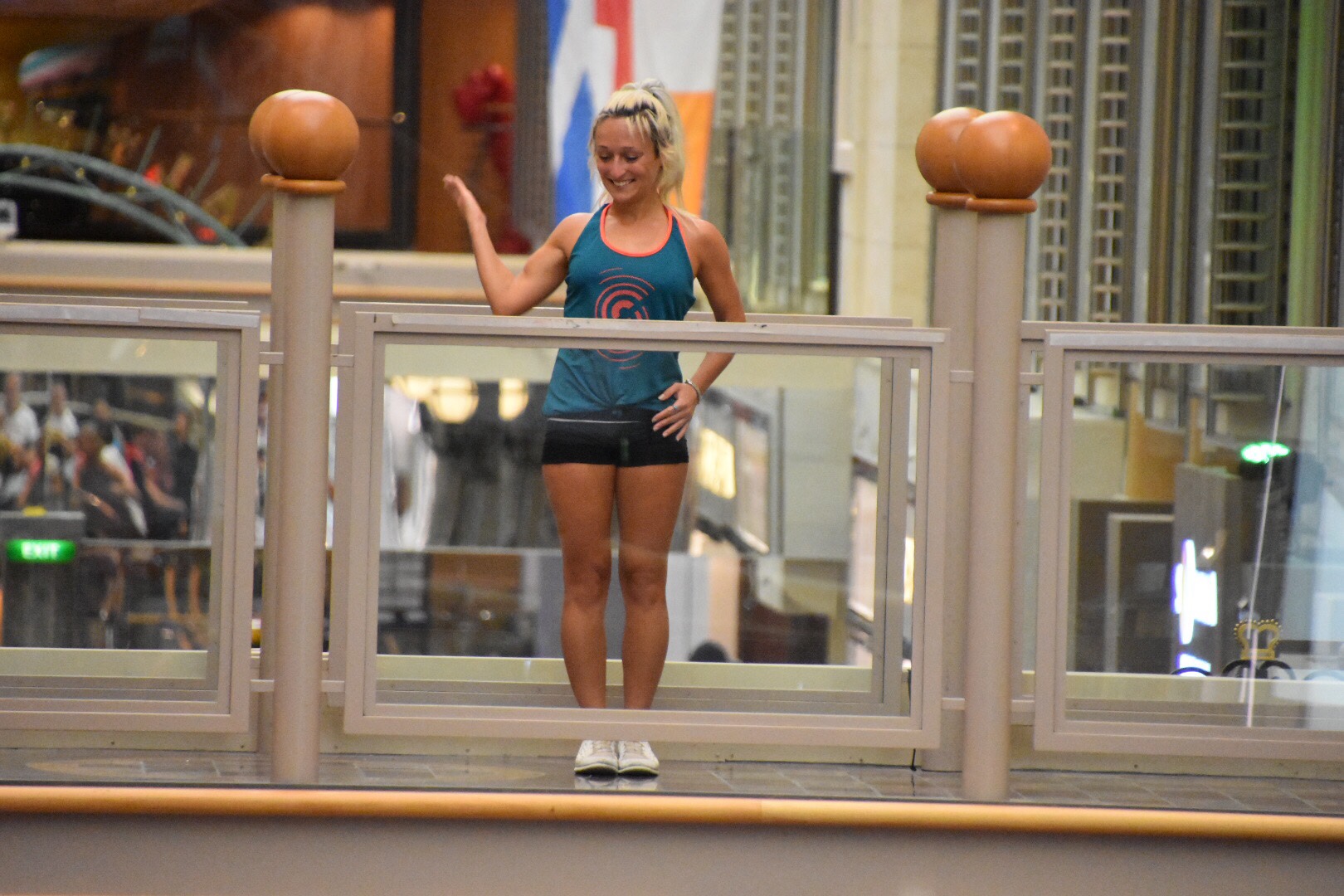 There are 3900 passengers so a few less than the Britannia but far fewer kids although there still are some of the little blighters onboard but not enough to make a complaint to Captain Stubing. It has a more international feel with 43 nationalities represented but 71% are British so it’s still a bit like the Dog & Duck at times. Football shirts, tattoos and all day drinking. Americans are second with about 450 and then rather surprisingly the Swedes come in third with 140.

I’ve become quizzed out and our team finished about 5th out of about 60 teams on the Progressive Quiz. Sound serious? It is. It’s a format used on cruises where there are a number of sea days and is often referred to as the Aggressive Quiz because things can get quite heated when such great prizes are up for grabs – keychains, pens, baseball hats. These people are serious quizzes and I’m struggling with the thought that I might be one of them.

The Swingers are Coming

When we reach Fort Lauderdale and disembark, the whole ship has been chartered for a six night cruise by a company called www.blisscruise.com marketed as a lifestyle cruise where clothing is optional for adventuresome couples bringing together a variety of open-minded groups such as nudists, swingers, voyeurs and exhibitionists. The crew have had training on how to treat the guests – no looking, no phones and they cannot use the public areas. There will even be clothing optional shore excursions as well as seminars exploring new areas of “lifestyle”. All cabins have to be double occupancy with at least one male and one female. Anyone turning up at the terminal without their partner will be denied entry if you pardon the pun. “My wife couldn’t make it but insisted I still go”. I know what you’re thinking. Not much luggage to bring, but there are various theme nights including Pirates & Wenches, Caribbean Kink, Has Anyone Seen My Sausage, Come Dancing and The Full Moon Party. I feel like staying onboard, for the sake of the blog you understand. One area is being fitted out with mattresses to make a playroom. I hope they give the ship a thoroughly good clean at the end.

Royal Caribbean aren’t my favourite cruise line with their overcrowded sun decks and “organised fun” – international belly-flop competition (third), World’s Sexiest man competition (DNQ). Also, in daily life I don’t normally have to deal with as many chavs. This was also the most expensive cruise for onboard spending – $3.50 for a can of coke, $7.75 for a small can of alcohol free lager and 12 bucks for a glass of wine. Spa treatments and excursions were also the most expensive I’ve encountered.

There were some highlights though. The trivia crowd were good value, the gym was superb and watching Carolina take the Zumba class was life affirming.

I've had worse days. Whilst I was still sleeping the captain sailed stealthily into Geiranger…