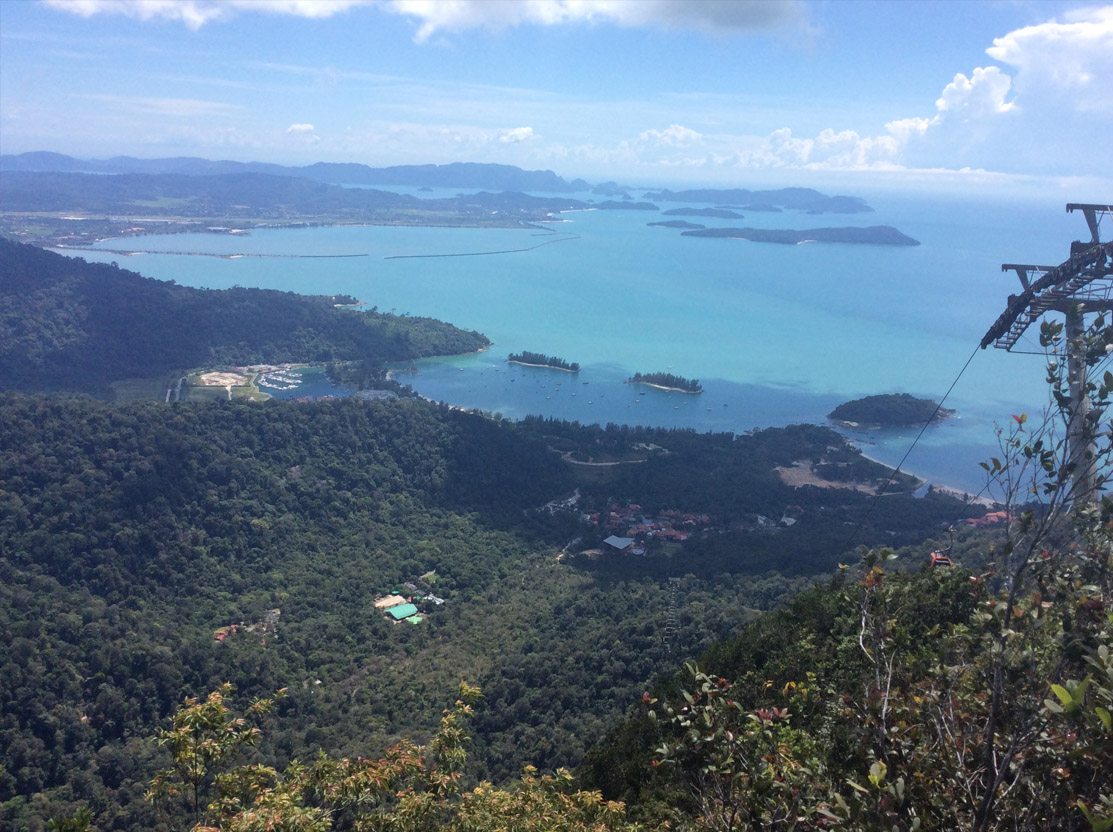 Monday – I left the hotel in Penang and headed for the ferry terminal hoping it wouldn’t be but first sight of  the boat made me apprehensive. Long, thin and low slung and not the most seaworthy of specimens but in for a penny – I’d only paid 10 quid so what was I expecting. My fellow travellers were mostly backpackers from Europe and I positioned myself at the back near to the toilet. Could be a good thing; could be a bad thing. Sick bags were hanging all over the cabin. There were two English girls in front of me who were backpacking for a year (although they were about 30) and I accepted the offer of a travel sickness pill however I mixed it with a smint and the result was rather alarming: it was like Kujo so I asked her for an antihistamine as they seem to cure most things. They’d been told it was going to be “rough” and I wondered why I hadn’t flown, gone by bus or even walked the 100km to Langkawi. Anything but a repeat of Montserrat to Antigua. The journey went from 2.5 hours to 3.5 hours but aside from a few casualties who probably get motion sickness on an escalator, the crossing was disappointingly smooth.

Langkawi is a tax free island (as if it needs to get any cheaper)! Any cheaper and they’ll be paying me to drink beer. A lot of Malaysians come here to buy “stuff” but there’s a limit of 500 ringgit which is just over £80 so it keeps them coming back for more. In total there are 99 islands in the archipelago of which only two are inhabited. Langkawi is the largest at 184 sq miles so 50% bigger than Penang and it’s located in the Andaman Sea very close to the Thai border.

My taxi driver (no photos of him I promise) picked me up at 9am for an island tour. Driving around the island I thought how similar it was to Antigua but with better roads – smoother and wider. First he took me to where they do boats trips and it cost me a small fortune in Malaysian terms. The whole boat was 250 ringgit so just over 40 quid but normally this is split by a party of say 10. I didn’t realise this at first so merrily I paid the money and ended up having a private tour. In hindsight it was much better so I didn’t mind the extra cost. First was the bat cave which was thouroughly underwhelming – bats hanging from the ceiling, asleep. I’ve had more fun at the hygienist.

Then the fish farm which was far more interesting where I got to touch a horseshoe crab (it gets better). Then a spot where two types of eagle swoop down and pick up fish with surprising success which was quite something to see but even with my zoom lens (270) the photos will still make them look like sparrows. Finally out onto open water in the Andaman Sea where I was so close to Thailand my phone came alive and said “welcome to Thailand, calls cost….”.

If the day had finished then and there I would have been satisfied but next it was off to the crocodile farm where the finale of “the show” was a trainer putting his hand into the mouth of a 16ft croc. I was hoping it was going to be his head – now that would have been impressive.

Third was the waterfall. There are several on the island but this one was free! I was dropped off and told I had to climb up this road then turn left. It would take 15 minutes to get there. The ascent took 3 minutes – I timed it, and it was so steep I think even a mountain goat would have declined. By the end I was almost crawling up the road and I couldn’t have gone another step without oxygen. The most knackering thing I’ve done in ages. But in the end it was worth it. The most beautiful waterfall and I was there alone. No coach parties from a cruise ship or Germans (they’re everywhere). Just me. Fabulous.

The last stop on the tour was by far the best. The cable car – the steepest in the world which took 15 minutes to reach the top and the span between the towers meant a great deal of sagging. I much prefer a taut cable. It felt almost vertical at some points and I was sitting with 5 nervous young Malaysians who had no idea that I was more nervous than all of them. The relief when we got to the top. Then it was another short cable car hop to the sky bridge which is 400ft long linking two peaks with breathtaking views of the islands. I’d paid extra (10 quid) to get the express pass which meant no half an hour queue for each segment and it was well worth it. I didn’t see anyone else who’d done the same. I shared a gondola, as they’re called with some Indian people from Chennai on the way down – there was an Englishman and five Indians in a gondola – sounds like the start of a bad joke.

After that my driver, Sukyu (I think that was his name) dropped me off and I went to the mall and had the obligatory cheeseburger – I’m trying to have one in every country I visit but failed in Brunei. Then it was Eagle Square another of the top three things to do in Langkawi which is just a statue of an enormous eagle. Not sure how it made the top three.

I’ve bought my ticket for tomorrow’s ferry to Satun in Thailand which takes an hour for only £5! Then it’s a taxi to Krabi. I’m hoping to pick up a little Thai.

As I write this there’s a woman in the pool in full burqa. Talking of swimming here’s a Speedo update. As Peter noticed a while ago in Antigua the “s” had fallen off and they said “peedo”. Now I’ve lost the “o”.