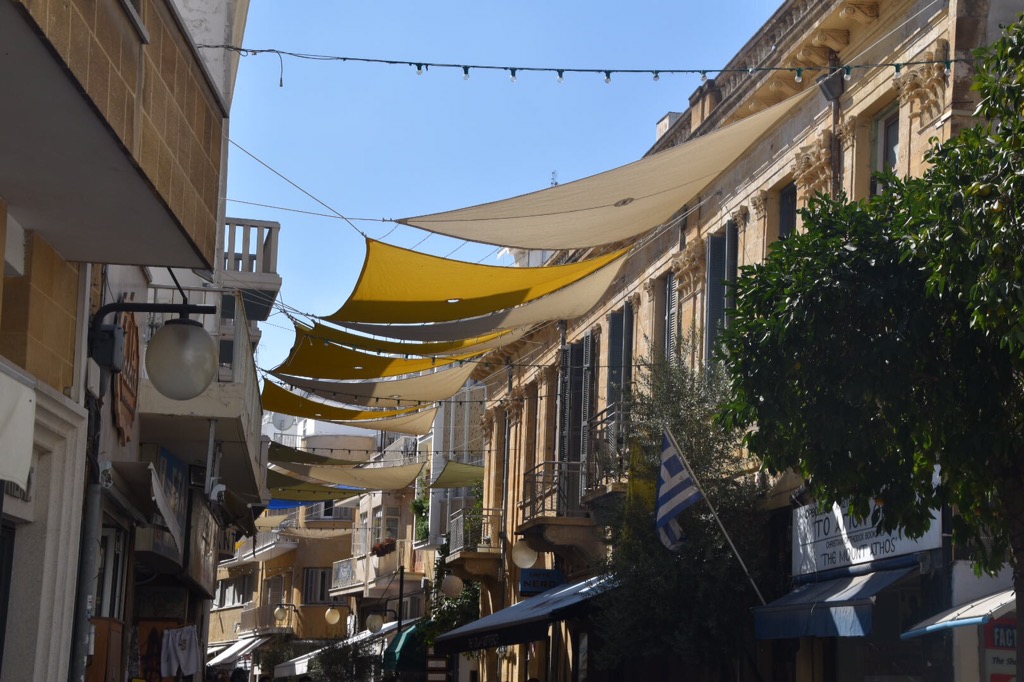 Friday 21st was a sea day followed by a gala dinner. We had 5 new table mates and to say it didn’t go well would be an understatement. After dinner Brenda, Susan and I had a post-mortem about our dining experience in the hot tub. I drank a little too much wine and half an hour later I was singing “tie a yellow ribbon round the old oak tree” with Chinese Colin at the karaoke wearing my dinner shirt, flip flops and a pair of fluorescent shorts. I didn’t remember too much about it however people have been kindly reminding me of the details all day.

On Saturday we arrived in Larnaca, Cyprus and I was looking forward to going to the capital, Nicosia which is referred to as the divided capital. The ladies and I jumped into a taxi and 40 minutes later we were dropped off with 2 and a half hours to mooch about. We walked down a pedestrianised street for about fifteen minutes until we came to the border where Nicosia divides. Unlike my hopelessly ill prepared friends I had my passport with me so I was able to cross through one checkpoint, walk 50 yards and then go through another on the Turkish side. It was markedly different and reminded me of a North African souk. I actually preferred it.

In 1974 there was a military coup and President Archbishop Makarios was deposed. In the months following Greek Cypriots moved south and Turkish Cypriots moved north as the country was effectively split in two. In one of the strangest disputes over territory that exists in the world today, Cyprus is Cyprus: one country as far as the world is concerned all except Turkey who lay claim to northern Cyprus as belonging to them.

Someone once said of cruising that it enabled you to have a glimpse of a country to determine if you would like to spend more time there. I would definitely like to do that with Cyprus.

My upgraded cabin is at the back of the ship on a corner meaning it is one of only two cabins with double aspect views and the absence of an overhang means that it gets a great deal of sunshine and I can sunbathe commando on a choice of sun loungers. It’s a fabulous cabin in every way except at 5am when I’m rudely awakened as the ship prepares for entering a port and everything shakes. It’s how I’d expect an earthquake to feel. I’d complain but what can they do? Anyway the balcony and the bathtub more than make up for it.

The ship has its usual mix of characters. There is Don the farmer from Indiana who worked for 20 years and retired at the age of 38. He is now 77 and lives in California.

Then there is David from South Africa who knows Desmond Tutu quite well; Philip who used to work for colonel Gadaffi and Chris the astronomer who has had an asteroid named after him. Sauna Bob had interesting tales about flying helicopters in Vietnam where one of his duties was to sweep Hanoi harbour for mines and of course one of our dining table team Joyce from California who deserves her own chapter. Perhaps my favourite is English Chris from Canada who says he’s been on board for six months. He also keeps talking about his wife but no one has actually seen her and every time I see him and say hello he says “do I know you”. Rumour has it that I sang with him at the karaoke too but neither Chris or I remember.