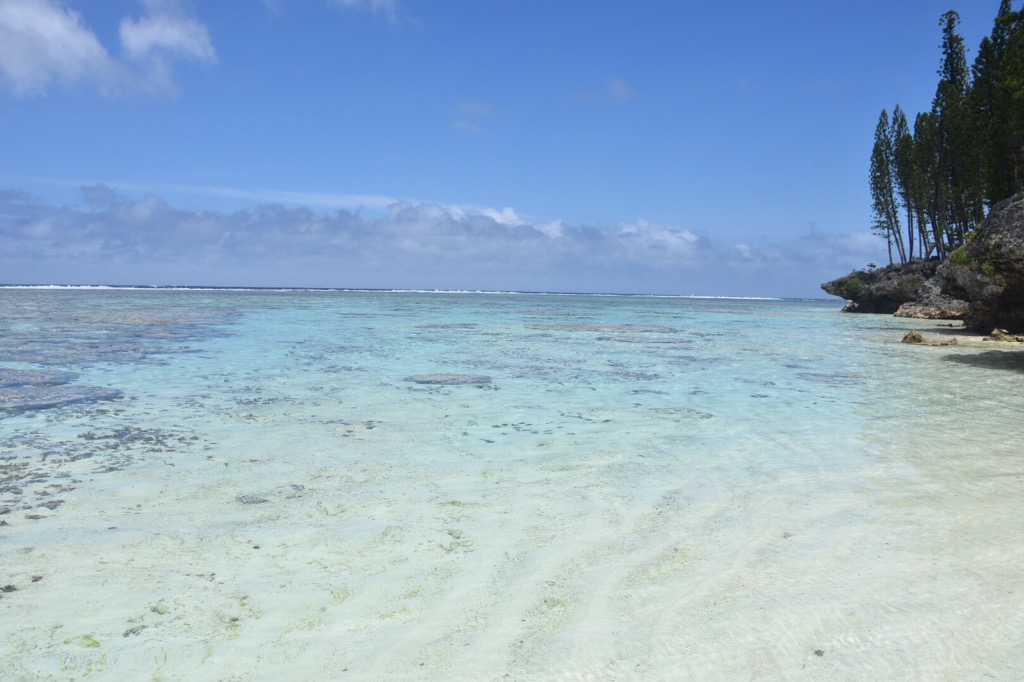 The first of two stops in New Caledonia was on the island of Mare pronounced mar-ray which is the second largest of the four Loyalty Islands. It is also one of the least visited islands in the Pacific. James Cook was the first European to discover the islands in 1774 and named them New Caledonia as it reminded him of Scotland. He must have meant the highlands because I saw no sign of Glaswegian splendour in my two days. Mare has only two large settlements on the island and we were all heading to Tadine. The island was supposed to be very basic and unspoilt and only recently opened up to tourism however if the roads and their vehicles are anything to go by I’d say it’s not as basic as we’d been led to believe.

New Caledonia is a French overseas department lying on the Tropic of Capricorn and using the Pacific Franc as its currency. The total population is around 269,000 with around two thirds in the capital, Noumea.

Tadine was a village set beside a beautiful beach with turquoise water, soft sand and a reef for snorkelling. I spent about 4 hours there with Linda from LA (former cage dancer in a Houston nightclub, cocktail waitress at Harrahs Lake Tahoe and ﻿went to many parties at the Playboy mansion) before returning to the ship.

Our second stop was at the capital of New Caledonia, Noumea on the island of Grande Terre. It reminded me of Papeete in Tahiti with a sophisticated French style, neatly laid out streets and obvious signs of wealth. The marina had some large boats and the real estate prices were very high indeed.

After vowing a number of times not to do Hop On Hop Off again, I found myself sitting on a front seat of the fun bus. First stop was the free museum where I lasted all of five minutes before sauntering up to St Joseph’s Cathedral. The highlight should have been the stained glass windows but despite their loveliness the organist playing the theme tune to Monty Python’s Flying Circus stole the show. Most incongruent.

Three port stops in as many days and I’m looking forward to a couple of sea days before arriving in Sydney on Saturday morning when I will lose most of the gang but gain Nancy from last year’s Med cruise.

Notwithstanding my inability to walk past the Explorer’s Cafe without sampling the cookie of the day, I don’t think I’ve gained any weight so far. I frequent the gym, climb lots of stairs and walk the decks to counteract the effects of the cookie cravings. A number of passengers haven’t fared so well and their expansion is quite visible. Cruises are the perfect for gluttons.

The sea has turned rougher as we make our way to Australia 1000 miles away. Force 10 this morning at one point. At reception they’ve put out some apples and crackers which apparently helps settle things down. My tolerance level is fairly high for rough seas (the Montserrat Incident) however I do find it difficult to sleep at night because I’m at the very end of the ship which has the most movement. Midships is always best.

I made a few new friends last night who are also circumsising Australia. Richard, 70 from Mobile, Alabama, 6’8″ (basketball player) and a lovely young German girl (she had me at guten tag) called Astrid in her forties.

Next stop Australia where Chuck and I will be out on deck as we sail into Sydney harbour doing some time lapse photography. Will the excitement ever stop?